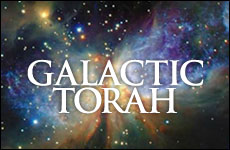 Talmudic wisdom is no "puff of start dust."

Imagine a project at Harvard to convene the greatest scholars in every field over a period of several hundred years in order to create an encyclopedia of their collective knowledge. Who wouldn't want to see the final product?

This is the Talmud: a collection of wisdom that would surprise experts in any discipline, including law, ethics, psychology and economics. In the realm of cosmology, too, the Talmud makes assertions -- sometimes literal, sometimes metaphoric, and sometimes both.

To give one example, consider the Talmudic estimate of the number and distribution of stars in the universe.

The vast bulk of Talmudic wisdom is transmitted from Moses.

In order to appreciate this passage, bear in mind two things. First, the vast bulk of Talmudic wisdom is claimed to be a transmitted tradition, from Moses to Joshua, to the prophets, to the Elders, to the Great Assembly, and then to a chain of scholars until the completion of the Talmud 1,500 years ago. Hence it is called the Oral Law.

Second, we need to appreciate the limitations of science 1,500 years ago: the telescope was invented in the 16th century, and the number of stars visible to the naked eye is approximately 9,000.

So what did these ancient rabbis say about the number of stars? In Tractate Brachot, page 32b, the Talmud records a tradition, in the name of Rabbi Shimon ben Lakish, that there are roughly 1018 stars in the universe. This number is remarkably big and much closer to the current scientific consensus of 1022 than common sense would allow.

Now, although it is interesting for an ancient people to have such a large estimate, this single coincidence could perhaps be explained as an extremely lucky guess. Never mind that no other ancient people had an estimate anywhere near this order of magnitude, nor did they have a conventional way to write such a number. (I have queried dozens of astronomers and none could identify a single other ancient culture with remotely similar numbers.)

However, the Talmud relates more than a raw number. The passage explains that the distribution of stars throughout the cosmos is neither even nor random. Rather, it states that they are clustered in groups of billions of stars (what we call galaxies), which themselves are clustered into groups (what astronomers call galactic clusters), which in turn are in mega-groups (what we call superclusters).

To describe the stars as clustered together, both locally and in clusters of clusters, was far beyond the imagination and the telescopes of scientists until Edwin Hubble's famous photographs of Andromeda in the 1920s. Galactic clusters and superclusters have been described only in the past decade or so. Moreover, the Talmud states categorically that the number of galaxies in a cluster is about 30. And wouldn't you know it, astronomers today set the number of galaxies in our own local cluster at 30!

The consensus of astronomers is pure astonishment.

Could it be that Rabbi Shimon ben Lakish made an extremely lucky guess? That might be plausible if he had used a number that had symbolic significance in Judaism, such as seven, 10, 18 or 40. What is the significance of the number 30? To my knowledge, there is no spiritual or religious reason for choosing that number. It therefore seems to be exactly what it claims to be: a conscientious oral transmission of a received tradition, rather than simply one person's guesstimate.

Moreover, Rabbi Shimon had a reputation for impeccable honesty; it is unthinkable that he would have invented these numbers or guessed without telling us so. The clear intent of the passage is to convey an oral tradition.

You are now in on the secret of Shavuot: There is something special about the Torah (and rumors of its demise have been greatly exaggerated!). The Torah is much, much more than a mere "cultural expression" of one tiny group of ancient people, so numerically small that we reminded Mark Twain of a "nebulous dim puff of star dust lost in the blaze of the Milky Way."

This passage about the stars is a mere five Talmudic lines, itself about as significant as a puff of star dust. But it also hints to the treasures available to those who seek them. Shavuot is a great time to begin.

Alexander Seinfeld is an ordained rabbi, a Stanford graduate and a former high school science teacher. He is the author of The Art of Amazement: Judaism's Forgotten Spirituality (JSL, 2010) and the founder of Jewish Spiritual Literacy, Inc. His weekly blog is at http://rabbiseinfeld.blogspot.com.

Small Acts, Cosmic Implications
Why My Iranian Mother Didn’t Want Me to Become a Religious Fanatic
The Jewish History of Prague
Why the Sexual Revolution was Bad for Women
Comments
MOST POPULAR IN Shavuot
Our privacy policy
Aish.com Is Looking for Great Writers