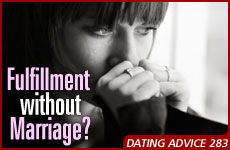 Can she be ultimately fulfilled without achieving her goal of marriage?

I am a 40-year-old single woman with no children, but I am still hoping for these things to happen, sooner than later. I read Rabbi David Clyman's article on Aish.com, "Is Married Life the Easy Life?" where he describes the futility of choosing "comfort" in the pursuit of marriage. I agree that the single life is easier, at least from what I have observed from family and friends who I saw marry in their 20s, and in many cases, get divorced and remarried more than once.

As I advance toward the completion of my doctorate this year, most days I appreciate my freedom. But there are many days, especially now that I've turned 40, when I deeply lament having such a void in my life.

So while I would very much like to get married and have children, I find myself asking the question if I could be ultimately fulfilled if I don't get married? And I wonder why my friends find someone to marry after they get divorced -- while I am still single. This has been a painful struggle for me, and some days the loneliness seems unbearable.

Sometimes I feel like I'm barking up the wrong tree and am destined to stay single forever. Can you advise me how to proceed?

The question you're asking is not easy for anyone to answer, and we feel a great responsibility to help you find a sense of inner peace, even though something you very much want in your life hasn't yet happened. We can only begin to understand how painful it is to be a 40-year-old woman who longs for a lifetime companion and to have and raise children, and feels that such a goal is eluding her.

We work with many people who face similar life situations, and our biggest wish is to be able to erase everyone's pain and enable them to achieve their dreams. Fortunately, many times we're able to help people -- either through giving encouragement, offering practical advice, or helping them work through the key issue holding them back.

However, we believe these efforts are ultimately successful only because other metaphysical factors are working in tandem; i.e. that God has decided this is the right time to find the right person to marry. And though we may wish for a different timetable, we trust that God knows best.

Her hopes were dashed when her new marriage dissolved.

It might help you to draw inspiration from the example of Sarah Schenirer, a young Jewish woman who lived in early-20th century Europe. She dreamed of being a wife and mother, but her hopes were dashed when her new marriage dissolved. As she worked to support herself as a seamstress, she saw a great need in the Jewish community: an entire generation of young Jewish women were abandoning their heritage because they knew very little about it. Sarah Schenirer chose to turn her energies toward filling this monumental void, and her efforts ultimately led to the creation of a worldwide school network that exists to this day.

Sarah Schenirer remarried later in life, but was never able to bear children. However, this intelligent and compassionate woman become a beloved mentor and confidante to her students and the spiritual mother of generations of Jewish girls. The impact of what she did is so far-reaching that she is credited with literally saving much of Jewry from spiritual extinction.

The point of this example is that none of us knows what we're meant to accomplish in this world. If we try again and again to achieve something that doesn't happen, it could be because that isn't meant to occur for us at this point in time, and that we're meant to be doing something else.

What should a person do when they're frustrated and struggling to reach their goals? Our suggestion isn't an easy one for many people because it requires letting go of our sense of "control," and trusting in the Almighty. The idea is to say as follows:

"This is not in God's plan for me at this moment in time, and He has a reason why I am this situation. Although I don't know the reason, there are a number of things I can be doing while I hope, pray, and try to reach my goal. Perhaps I also need to work on myself... or accomplish something that I wouldn't be able to achieve if I had gotten what I wanted. Maybe there is something I should be doing before my wish can be fulfilled, like improving my character, doing something for other people, or correcting a wrong I did to someone else.

"So, even though I am so deeply disappointed that I am not in a place I very much want to be, I can continue to hope, pray, and work toward it. At the same time, I'll try to live as full a life as I can. I will work on improving myself and doing good things for other people, and get as much joy and purpose as possible out of my life."

Part of this introspection process involves identifying those aspects of your persona or your life that you can develop to help further whatever goal you are trying to accomplish. When it comes to dating, there are so many areas to explore, and making a change in just one or two of them can help you gain clarity and move forward.

Don't beat yourself up if things don't go according to your timetable.

For one person, this could mean realizing that she's been overly focused on herself and deciding to become more involved her community. For another, it could be reassessing her short and long-term goals and narrowing the focus of what she's looking for. Another person could decide to change her strategy for finding dating partners by learning how to network in many different venues, and by considering people she might have turned down in the past, such as men who were otherwise good for her but had been married before.

So the idea is two-tracked: Make the appropriate effort, but realize that you cannot do more than that, and the result is up to the Almighty. Don't beat yourself up if things don't go according to your timetable. There are many possible solutions on the horizon that you may not have considered before; perhaps you will become the perfect match for a widower with young children. We have seen this happen many times. The possible solutions are endless, and embracing the unexpected is part of the joy of life.

We wish you success in all your endeavors, and in navigating the dating maze.

Dating Maze #243 - E-Friend Fiasco
It Takes A Lot Of Faith To Be An Atheist
How Instagram Brought Back This Nostalgic Soup
What Makes Eli Run?
Comments
MOST POPULAR IN Dating
Our privacy policy