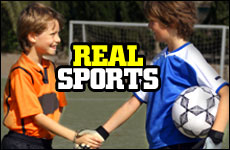 There is more than one way to hit the ball out of the park.

Western Oregon University's girls' softball team was playing a critical game against Central Washington University. The game had playoff implications. Sara Tuchilsky, an unheralded senior player for Western Oregon stepped up to the plate in a 0-0 game with two runners on base and hit a home run over the center-field fence. Her coaches and teammates could not believe it; Sara had never hit a home run in her entire high school and college career. What a moment! Her first home run ever and it put her team in front 3-0 in this pivotal game.

Sara began to run the bases with pride but realized that in her excitement she had missed touching first base. So she turned to start back to first. While twisting, her knee somehow gave way and she collapsed in agony. She crawled back to first but could do no more. The first-base coach told her that, according to the rules, if anyone on the team tried to help her, she would be called out.

The umpires gathered and explained that Sara could be taken out of the game and a pinch runner called in to replace her, but the home run would have to count as a single and the pinch runner would go to first base where Sara was crumpled on the ground in pain. Western Oregon coach Pam Knox didn't know what to do. "She was going to kill me if we sub and take the home run away. But at the same time I was concerned for her."

Mallory couldn't believe that Sara was going to be robbed of this home run.

Central Washington's first baseman, Mallory Holtman, was horrified by what she saw happening right before her eyes. She couldn't believe that Sara was going to be robbed of this home run. She approached the umpire and asked about an idea. While Sara's own teammates could not help her, could her opponents assist her in any way? The umpires explained that there was no rule against Mallory helping.

Keep in mind that this three-run home run at that point in the game was a deciding factor in keeping Mallory's team out of the playoffs. They had to win that game. This did not stop Mallory from carrying out her plan. As stunned spectators rose to their feet to watch, Mallory and Central Washington's shortstop, Liz Wallace, put their arms under Sara's legs, Sara put her arms around their shoulders, and they carried Sara around the base paths, stopping to let her touch each base with her good leg.

"The only thing I remember," Sara explained, "is that Mallory asked me which leg was the one that hurt. I told her it was my right leg and she said, `OK, we're going to drop you down gently and you need to touch it with your left leg,' and I said 'OK, thank you very much.' She said, `You deserve it, you hit it over the fence,' and we all kind of just laughed."

Mallory and Liz explained after the game that they weren't thinking about the playoff spot, and didn't consider the gesture something others wouldn't do. "We just wanted to help her," said Liz.

As the trio reached home plate, the entire Western Oregon team was in tears.

After the game Mallory remarked, "In the end, it is not about winning and losing so much. It was about this girl. She hit it over the fence and was in pain, and she deserved a home run."

The Madison Knights of Milwaukee, a high level high school basketball team, recently hosted its arch rival from Dekalb, Illinois. Madison was shorthanded before this important game even started since Senior Co-Captain, Johntell Franklin, stayed home to continue mourning his mother's very recent death. However, while sitting at home alone, Johntell felt that he needed to be with his friends at the game. He could draw comfort from being together with his teammates and schoolmates. So he hurried off to his school knowing that the game would already be in progress. Upon his arrival at the school he quickly changed into his uniform and ran out of the locker room to join his team.
Madison's Coach Womack described what it was like when Johntell appeared from the locker room: "When he came with that uniform on, there was like a hush over the crowd. I almost had to call a time-out to wipe some tears away."

But there was a problem. Coach Womack had assumed that Johntell wouldn't show up to play so he didn't enter his name in the official scorer's book prior to the game. Sending him into play despite this omission was against the rules and would translate into an automatic technical foul against Madison that would award DeKalb with two uncontested free throws in what was a very close game.

David Rohlman, DeKalb's coach ,in a remarkable act of sportsmanship, told the head referee not to charge Madison with the technical foul, given the circumstances. "I expressed to him that we should not be shooting the technical foul, that we did not want one," Rohlman said. The referees would not budge explaining that the rules are the rules even if there were extenuating circumstances, and they awarded Dekalb their free shots.

Coach Rohlman had to choose someone on his team to take those two uncontested and possibly decisive shots. Darius McNeal, the team's best foul shooter, volunteered to take the free throws.

McNeal had a plan. The high school Junior superstar marched up to the free throw line and simply rolled each shot on the floor. "I missed them because it was just the right thing to do at the time. And him losing his mom, it really got to me," said McNeal, who lost his father when he was two years old.

The entire Madison team and coaching staff rose to their feet in a in a standing ovation for their arch rivals.

When they realized what McNeal was doing, the entire Madison team and coaching staff rose to their feet in a in a standing ovation for their arch rivals. The Madison Knights ended up pulling ahead after that break in the action and went on to win 62-47. But no one is talking about the final score.

Johntell's eyes filled with tears when he realized what his arch rivals were doing for him and his team. "That made me feel good that the other team was supporting me." This act of kindness and compassion helped propel Johntell to a path where he could move on despite his mother's death.

King David taught in Psalms that "The world is built on kindness." This ideal has since spread from the pages of the Bible to the nooks and crannies of our globe. Through their thoughtful actions, Mallory Holtman and Darius McNeil built worlds for students on their competing teams.

How many worlds are we going to build? It's time to get to work.