Two Celebrations of the Torah 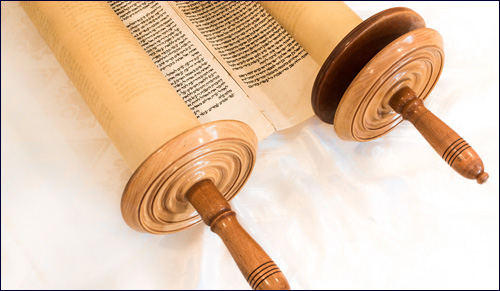 Why do we have two holidays for the Torah -- Shavuot and Simchat Torah?

If the holiday of Shavuot celebrates the receiving of the Torah, why was Simchat Torah -- immediately following Sukkot -- chosen as the day to end and begin the annual Torah reading cycle?

Furthermore, why do we have two holidays for the Torah -- Shavuot and Simchat Torah? They are also celebrated so differently. On Shavuot, we stay up all night learning Torah. And on Simchat Torah, we dance.

The need for these two holidays has been explained in a parable that has been handed down from generation to generation.

Once a king issued a proclamation. Any one of his subjects was welcome to try for the hand of his daughter. On one condition: The potential suitor was not allowed to meet or see his daughter before the marriage.

The proclamation caused quite a stir. Soon the local inns were buzzing with speculation and rumors. "I hear she is a real shrew," said one. "I heard she is a deaf-mute," said another. "I know for a fact that she is a total imbecile," intoned a third. Round and round the rumors flew. Finally, a simple wholehearted Jew spoke up. "I am willing to marry her. How bad can she be? After all, she is the king's daughter and we all know how great our king is."

Word quickly spread and the suitor was led to the palace. As it turned out, he was the only one who volunteered. The king accepted the match and the wedding date was set.

After the lavish wedding, the groom escorted his bride to their new home. She removed her heavy veil, and he was astounded at her beauty. Remembering the rumors of her reputed faults, the groom decided to thoroughly test her. He engaged her in conversation, tested her in character and refinement and found himself pleasantly surprised. In every way, she excelled beyond his greatest hopes and dreams. Overjoyed, he held a lavish party to celebrate his good fortune.

The King in the parable is God. When He wanted to give the Torah, He offered it to each nation in turn. All the nations refused, each one claiming some fault in the Torah they would not be able to live with. When God offered it to the Jews, they said 'Naaseh VeNishma' -- "we will do, and then we will understand" (Exodus 24:7). The Jewish people accepted the Torah without having seen it, as they were grateful for all God had done for them.

Though the Jewish people fully accepted the Torah, they feared a loss. They assumed that the numerous obligations in the Torah would deprive them of their pleasures and freedom. Similarly, the groom in the parable married the king's daughter fearing he would be disappointed in other areas. But as the Jews learned the Torah and applied it's teaching to their lives, they were pleasantly surprised. Not only did they not have to give up anything, they found the Torah maximized their pleasure in every way.

Therefore at the conclusion of reading the Torah, when we have again delved into its teachings for a full year, we make a party on Simchat Torah.

On Shavuot, we stay up and learn all night to show our readiness and anticipation to receive the Torah. Because it is an intellectual appreciation, we stay up all night learning Torah. On Simchat Torah, however, we dance -- expressing the emotional joy of the body. We are showing that even our bodies have gained tremendously by keeping the Torah.

Ask anyone who has increased their Torah observance and they will tell you the same. At first, each feared, according to his or her nature, that some aspect of the Torah would be restrictive. Be it keeping Shabbat, kosher, family purity or laws of proper speech, each encountered an area that tested their resolve. However, they kept the Torah knowing it was the most meaningful thing to do. And as they grew in their Judaism, they found their lives enhanced in every way.

It is with this renewed appreciation that we approach Simchat Torah. We are filled with gratitude and awe for the great gift that God has bestowed on us with love.

((based on Otzar haShavous quoting Rav Avraham and the Dubno Magid)

Dancing with the Rebbe