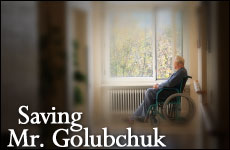 This was no replay of the infamous Terry Schiavo case. Everyone knew the patient wanted to live. Yet the hospital viewed those wishes as irrelevant.

Chaim Shmuel Golubchuk, a"h, has gone to his eternal reward. But the issues that pitted his children Percy Golubchuk and Miriam Geller against Grace General Hospital in Winnipeg over the last seven months will long be with us.

After being informed by their father's doctors that they intended to end his life by removing his ventilation and feeding tube, the Golubchuk children sought an injunction against the hospital. They argued that their father would adamantly oppose any attempt to shorten his life, which is forbidden by Jewish law.

After the entry of a temporary injunction, the hospital pursued an aggressive legal and public relations campaign. At one recent hearing, the hospital was represented by a team of no less than seven high-priced attorneys (despite its claims that providing care for Mr. Golubchuk was draining the hospital's resources.) Three doctors resigned from the hospital's intensive care unit claiming they were being forced to violate their ethical beliefs by continuing to treat Mr. Golubchuk rather than simply hastening his death. One of them graphically described in a public letter how the doctors in the ward would be left "to surgically hack away at his infected flesh at the bedside in order to keep the infection [from bedsores] at bay."

Charges that "hopeless" efforts to prolong Mr. Golubchuk's life were diverting valuable medical resources from other patients aired continuously in the Canadian media. One editorial in the journal of the Canadian Medical Association went so far as to accuse the Golubchuk children of using their religious beliefs to gain special treatment for their father. And numerous letters appeared in the Canadian press decrying or ridiculing the Golubchuk's religious fanaticism.

The hospital moved to cut off life support stating Mr. Golubchuk had only minimal brain function without a neurologist's evaluation or basic tests like an EEG.

Dr. Leon Zacharowicz, a New York neurologist, who devoted hundreds of hours of pro bono time to advising the Golubchuk family, noted in his court affidavits that the hospital had moved to cut off life support on the grounds that Mr. Golubchuk had only minimal brain function without his having been evaluated by a neurologist or such basic tests as an EEG or CAT scan having been administered. Yet at one point subsequent to the issuance of the temporary injunction, Mr. Golubchuk was described as "awake, alert, sitting up in a chair at times, more interactive and shaking hands purposively." His children reported his shedding a tear as they recited Krias Shema with him on Erev Shavuos. Dr. Zacharowicz, who initially entered the case at the urging of Agudath Israel of America, denied the claim of the Winnipeg doctors that Mr. Golubchuk was in any significant pain from any of the treatments being rendered, and noted that his medical charts show no evidence of significant pain management.

The hospital's argument that the treatment of Mr. Golubchuk severely impaired its ability to serve other patients with much better chances of survival would seem, at best, to have been highly exaggerated. A doctor who recently visited the intensive care ward reported that there were numerous empty beds and that the staff paid almost no attention to Mr. Golubchuk. That inattention may have eventually contributed to the bedsores that apparently killed him. Dr. Dave Easton, who works in the hospital's ICU, admitted in a June 17 piece in the Winnipeg Free Press, in which he shared his ethical dilemmas about continuing to treat Mr. Golubchuk, that "until the last few days, the level of care was no different than that of any patient on a 'medical ward' (with the exception of a ventilator), and essentially unchanged for the last number of months since his admission."

As medical technology improves the ability to prolong life, end of life issues like those raised by the Golubchuk case will become more and more frequent. Many of us will face such issues ourselves or on behalf of loved ones. That is one reason why it is so crucial that each of us prepare "living wills," such as that developed by Agudath Israel, to specify a competent halachic authority to make those crucial decisions for us in the event that we are incapacitated.

But the nature of the arguments made in the Golubchuk case makes clear that such legal protections could one day prove of limited utility. There is, of course, a wide range of legislation dealing with end of life decisions between various Canadian provinces in Canada and American states. Most American states apply a "brain death" standard to determine when death has occurred. New York and several others, however, provide a religious exemption for those who do not accept "brain death" as the proper standard.

The charge that Mr. Golubchuk's children were somehow taking advantage of their religion should give us all pause.

The Golubchuk case, while not about "brain death" (which even the hospital admitted had not occurred), demonstrates how precarious any form of "religious exemption" might prove to be, and the pressures that could amount against showing any deference to the religious beliefs of patients. In that context, the charge that Mr. Golubchuk's children were somehow taking advantage of their religion should give us all pause.

In Mr. Golubchuk's case there could be no dispute about what his wishes were. This was no replay of the infamous Terry Schiavo case. Yet the hospital and his doctors viewed those wishes as irrelevant. The Statement of the College of Physicians and Surgeons of Manitoba on Withholding and Withdrawing Life-Sustaining Treatment, published after the issuance of the first injunction, explicitly provides that "physicians have the authority to make medical decisions to withhold or withdraw life-sustaining treatment from a patient without the consent of the patient or the patient's family."

Jeff Blackner, executive director of the office of ethics of the Canadian Medical Association told Reuters, "We want to make sure that clinical decisions are left to physicians and not judges."

Despite the obvious importance of these issues to all observant Jews, there was no well-organized campaign to aid the Golubchuk family. The Golubchuk children were forced to rely on the services of a dedicated solo practitioner, whose primary expertise is in criminal law, against the hospital's team of corporate attorneys, and have been left to bear the immense legal expenses alone. (Agudath Israel of America was in the process of arranging pro bono research assistance from a major firm at the time of Mr. Golubchuk's passing.) Nor was there any organized effort to counter the hospital's media blitz.

As Dr. Zacharowicz noted in a eulogy read at the funeral, Chaim Shmuel Golubchuk was a hero. He went overseas as an underage 16-year-old to fight the Nazis, and never ate any non-kosher food, even on the battlefield. That stubbornness was transmitted to his children, whom he raised alone for 34 years, after the passing of their mother. They were able to repay, in part, that debt in recent years, spending many hours each day at his side, paying not heed to being maligned as cruel fanatics in the media, and bearing the enormous legal costs. In his children's dedication to upholding the Torah, Chaim Shmuel Golubchuk received his greatest tribute.

Probing Conversations between a Rabbi, Physicists, Psychologists, and Other Scientists
Scientific Curiosity and the Divine Encounter
Mind Over Milkshakes
Love the Convert
Comments
MOST POPULAR IN Current Issues
Our privacy policy
Aish.com Is Looking for Great Writers