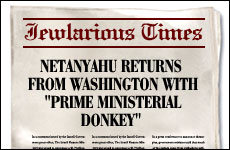 "Sheppy" to live on Netanyahu's balcony.

Jewlarious satire -- Israeli Prime Minister Benjamin Netanyahu and U.S. President Barak Obama met in Washington, D.C. this week, where President Obama put forth proposals that he felt would lead to an ever elusive peace in the Middle East.After listening to the President's proposals to partition Jerusalem and freeze all new housing in Judea and Samaria, a pensive Netanyahu told a joint Prime Ministerial/Presidential Press Conference, "I have listened to President Obama, but more importantly, I have learned from President Obama."

A stunned Gideon Saar of Ha'aretz asked Prime Minister Netanyahu, "Sir, does this mean that you will be dividing Jerusalem?"

Prime Minister Netanyahu responded, "What are you, insane? I have learned that it is time that we get a Prime Ministerial pet – when President Obama got that glorified poodle his ratings went through the roof." Prime Minister Netanyahu continued, "Do you know how many photo-ops he has had with that mutt and Sasha and Malia? You can't buy that kind of coverage! I wish I would have thought of getting a pet in 1997 – maybe David Levy would have stayed in the coalition."

Netanyahu chuckled, "We can only speculate and hope that he would have."

When President Obama got that glorified poodle his ratings went through the roof."

Jewlarious immediately hit the streets to gauge public opinion to a proposed Prime Ministerial pet , and what, if any, animal they preferred. Israelis seemed to welcome the idea. Yehoshua Ben Tsur, a 72-year-old retired electrician, offered only two words. "Gorilla. Zehoo."

Within earshot, 19-year -ld soldier David Varadi chimed in, "You can't house a gorilla in the middle of Rechavia [the Prime Minister's residence]! They should get a Goldipoo named, 'Shev.'" Meanwhile, eight year old Avital Cohen demanded, "If my parents won't get me a penguin, I want Prime Minister Netanyahu to get the country one.... or a manatee...or a unicorn."

By day's end, with public interest growing, Prime Minister Netanyahu's Press Secretary Yossi Levi, told a press gathering, "We felt that we had to make a decision quickly. The Prime Minister's children, particularly his beloved twenty-nine year old daughter Noa, had long been desperate for a donkey. They convinced Bibi to go to the local donkey shelter and before you know it, 'Sheppy the Chamor' was in the back of the Prime Ministerial sedan, braying his way to Jerusalem" Levi told the press that the Prime Minister had established clear rules for his children: Sheppy is to be fed only mule food, sleep on the balcony and is never to be ridden in the house. Asked if Netanyahu had taken Sheppy on an inaugural ride, Levy replied, "I cannot confirm or deny that Prime Minister Netanyahu rode Sheppy to the supersol this afternoon."

New Jewlarious Blog #2
Why Are The Prayers Of Yom Kipur So Repetetive?
Ha'azinu 5783: A Time for Unity!
Twisted Thinking
Comments