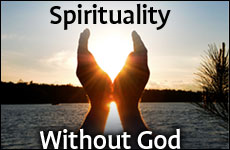 We are finally recognizing that reality includes a spiritual dimension. But somehow God has gotten lost in the shuffle.

Melody died last week, at the age of forty-two. Exactly 12 months ago, she got a surprise diagnosis: that her throbbing back pains were caused by metastasized breast cancer.

Her prognosis was less than two months to live. Melody and her long-time boyfriend Kevin fought valiantly, using every weapon in the arsenal of New Age cures including energy healing, acupuncture, rebirthing, visualization, diet, and contact with nature, in addition to radiation and chemotherapy.

Melody's religion was made up of meditation, vibrational healing, positive thinking, and music.

Although I did not know Melody well, her ordeal touched me deeply. She had been a periodic member of the ashram where I lived for 15 years before moving to Jerusalem and taking on the path of Judaism. The daughter of a Swedenborgian minister, Melody practiced a generic New Age religion, which embraced meditation, vibrational healing, positive thinking, and music. She played the guitar and sang beautiful songs of her own composition, songs about love and the spirit.

Kevin sent out frequent e-mails about Melody's progress, and eventual decline. In the spring she rallied, miraculously defying her prognosis. She started to walk again, gained weight, and was featured on a PBS television special about alternative healing. A euphoric Kevin wrote to thank all the people who had sent Melody their prayers and healing thoughts.

Something was bothering me. I wondered why, in his long letter, he never thanked God.

ANGELS AND MIRACLES, BUT NO GOD

Throughout the year, Kevin wrote of angels, miracles, spiritual worlds, dreams, and the importance of sending Melody only positive energy. Many times he asked everyone to pray, but the more I contemplated his messages, the more I became aware of something I can only call, "horizontal prayer" -- the sending of positive, healing wishes for recovery not to God, but to Melody! In fact, in his very first letter Kevin wrote:

"I've asked that all the Swedenborgian churches that we performed at during the Peace Prayer tour offer prayers to Melody this Sunday morning."

I originally thought the "to" was a typo.

The last letter, written by Devipriya, one of our ashram friends, described Melody's passing -- she was surrounded by fragrant flowers, with four of the ashram members chanting to their lineage of gurus, sending her off to complete her mission in the spirit world. During the transition, they devotedly followed the directions of a shaman and a Buddhist lama. Devipriya wrote: "The room was so charged and so peaceful at the same time, like angels had come and lifted her from her body."

Reading that letter amidst my sorrow, I couldn't help but think how different is the focus of the Jewish tradition, where a yearning for a connection with God permeates every conscious act.

Rabbi Leib Kelemen is fond of saying: "Judaism is not a religion, it's a relationship." All the elements of Judaism work to further the relationship between the human being and God. Prayer is vertical: a one-to-one conversation with God. The commandments are to be performed in the same way that a lover does the bidding of his or her beloved. Therefore, Judaism without God would be like Romeo and Juliet without Juliet.

Judaism without God would be like Romeo and Juliet without Juliet.

It is a truism that increasing numbers of people are not marrying, because of their inability to commit to a relationship. One wonders if the predilection for spirituality without God derives from the same syndrome: valuing freedom and independence over a relationship which will often demand the total giving of one's self.

My teacher, Rebbetzin Tziporah Heller, says that even when one is dealing with a situation in accordance with lofty principles and techniques, one must still ask, "Is God in the picture?"

For example, the self-help market offers dozens of books on how to control destructive anger. All these techniques may be useful. Judaism, however, would add that when faced with an anger-provoking situation, one must recognize that everything comes from God. And that includes the phone ringing with a wrong number in the middle of the night, the spilled salad dressing on your just-washed floor, the train you are running to catch pulling out of station one minute early. No matter which techniques you apply to bring down your blood pressure, if God is not in the picture, you are missing out on a custom-made opportunity to connect with the Divine.

What's wrong with a picture devoid of God? Quite simply: God is reality -- both ultimate reality and immediate reality. To live in this world oblivious to God is like being a fish oblivious to water. It's okay for a fish, but not for a person who aspires to greater consciousness.

LOST IN THE SHUFFLE

After two centuries engrossed in a materialistic vision of the world, the West is enjoying a resurgence of spirituality. The popularity of angels, psychic phenomena, faith healing, meditation, and near-death experiences testifies to a paradigm shift in our concept of reality. We have at long last begun to recognize that reality includes a spiritual dimension, which is not susceptible to scientific measurement.

But somehow God has gotten lost in the shuffle. It is rather like a lavish Bar Mitzvah party, replete with a 10-piece orchestra, 14 tables of smorgasbord, six Viennese dessert tables, a troupe of jugglers and acrobats, and no glimpse of the Bar Mitzvah boy.

It is no coincidence that the most popular Eastern paths in the West are derivatives of Buddhism, a non-theistic religion. Gautama Buddha, the fifth century BCE founder of Buddhism, never mentioned God in his teachings. His Four Noble Truths and his Eightfold Way speak about escaping the inherent suffering of this world by transcending desire and practicing right action and thought. The entire thrust is on human consciousness, control of mind, and self effort. This forms the prototype of most of the personal growth movements prevalent in America.

While Hinduism is a totally theistic religion, its American transplants emphasize their lineage of gurus rather than the deities of the Hindu pantheon (with the exception of the Krishna Consciousness movement).

The "inner voice" rarely tells one what one doesn't want to hear.

The advantages of spirituality without God are obvious: One can choose one's own direction, methods, and goals without the intrusions of the Divine. The "inner voice," which functions as the CEO of most New Age enterprises, rarely tells one what one doesn't want to hear.

Judaism, on the other hand, has bequeathed to the world a God Who not only created and sustains the universe, but Who also issues orders, like, "Do not steal," and, "Do not commit adultery." Little wonder that most people resist such encroachments on their personal lives.

Click here for Sara Rigler's schedule of lectures taking place in the United States during the month of Nov, 2008.

Whose Abraham?
It Takes A Lot Of Faith To Be An Atheist
How Instagram Brought Back This Nostalgic Soup
What Makes Eli Run?
Comments
MOST POPULAR IN Spirituality
Our privacy policy