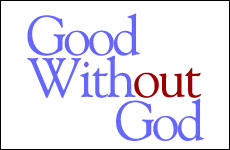 Reason alone is not enough to keep human beings humane.

It has beome an annual tradition: The days grow shorter, the holidays approach, and the American Humanist Association rolls out an ad campaign promoting atheism and disparaging religion.

Last year, the organization placed ads reading "No god? No problem!" on hundreds of billboards and buses in more than a dozen cities. Its theme in 2008 was: "Why believe in a god? Just be good for goodness' sake."

This year, the association is taking a more combative tone. It is spending $200,000 to "directly challenge biblical morality" in advertisements appearing on network and cable TV, as well as in newspapers, magazines, and on public transit. The ads juxtapose violent or otherwise unpleasant passages from the Bible (or the Koran) with "humanist" quotations from prominent atheists. For example, a dreadful prophecy from the Hebrew prophet Hosea -- "The people of Samaria must bear their guilt, because they have rebelled against their God. They will fall by the sword; their little ones will be dashed to the ground, their pregnant women ripped open" -- is contrasted with Albert Einstein's comment that he "cannot imagine a God who rewards and punishes the objects of his creation."

Of course anyone can cherry-pick quotes to make a point. And of course it is true, as the humanist group's executive director Roy Speckhardt maintains, that there are "religious texts" that "advocate fear, intolerance, hate, and ignorance." Religion has often been put to evil purposes or invoked to justify shocking cruelty; the same is true of every area of human endeavor, from medicine to journalism to philosophy to the law.

But it will take more than a few grim verses plucked out of context to substantiate the core message of the American Humanist Association's ad campaign: that God and the Judeo-Christian tradition are not necessary for the preservation of moral values and that human reason is a better guide to goodness than Bible-based religion.

Can people be decent and moral without believing in a God who commands us to be good? Sure. There have always been kind and ethical nonbelievers. But how many of them reason their way to kindness and ethics, and how many simply reflect the moral expectations of the society in which they were raised?

In our culture, even the most passionate atheist cannot help having been influenced by the Judeo-Christian worldview that shaped Western civilization.

In our culture, even the most passionate atheist cannot help having been influenced by the Judeo-Christian worldview that shaped Western civilization. "We know that you can be good without God," Speckhardt tells CNN. He can be confident of that only because he lives in a society so steeped in Judeo-Christian values that he takes those values for granted. But a society bereft of that religious heritage is a society not even Speckhardt would want to live in.

For in a world without God, there is no obvious difference between good and evil. There is no way to prove that even murder is wrong if there is no Creator who decrees "Thou shalt not murder." It certainly cannot be proved wrong by reason alone. One might reason instead -- as Lenin and Stalin and Mao reasoned -- that there is nothing wrong with murdering human beings by the millions if doing so advances the Marxist cause. Or one might reason from observing nature that the way of the world is for the strong to devour the weak -- and that natural selection favors the survival of the fittest by any means necessary, including the killing of the less fit.

To us today, believers and nonbelievers alike, it may seem obvious that human life is precious and that the weakest among us deserve special protection. But would we think so absent a moral tradition stretching back to Sinai? It seemed obvious in classical antiquity that sickly babies should be killed. "We drown even children who at birth are weakly and abnormal," wrote the Roman philosopher Seneca the Younger 2,000 years ago, stressing that "it is not anger but reason" that justifies the murder of handicapped babies.

No, reason alone is not enough to keep human beings humane. Only if there is a God who forbids murder is murder definitively evil. Otherwise its wrongfulness is no more than a matter of opinion. Mao and Seneca approved of murder; we disapprove. Who are we to say they were wrong?

The God who created us, created us to be good. Atheists may believe -- and spend a small fortune advertising -- that we can all be "good without God." Human history tells a very different story.

Nike and the Purpose of Life

Morality: Who Needs God?
Scientific Curiosity and the Divine Encounter
Mind Over Milkshakes
Love the Convert
Comments
MOST POPULAR IN Philosophy
Our privacy policy
Aish.com Is Looking for Great Writers