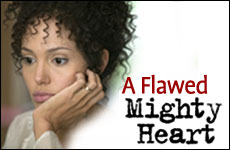 The film's message is antithetical to the real meaning of Daniel Pearl's murder.

Movie pioneer Samuel Goldwyn, in his now classic line about the film industry, concluded that "Pictures are for entertainment; messages should be delivered by Western Union."

By that standard A Mighty Heart should never have been made. It is painful to watch the true story of journalist Daniel Pearl whose abduction and gruesome execution by Muslim extremists in 2002 reverberated around the world. Adding to the horror is the knowledge that Pearl's wife, Mariane, was six months pregnant at the time. Her tragedy finds its most powerful expression in the primal scream Angelina Jolie, the superstar playing her, lets out when she hears the news that her husband is dead. I defy any viewer not to be affected to be moved to tears.

We watch not because we are entertained. For that matter, the movie has a plot that holds not a single surprise and an ending that is a foregone conclusion to its audience. It is rather a film that asks us to relive a heartbreaking event in order to better comprehend its meaning. It is, as the producers repeatedly made clear in interviews, a documentary with a message. The film demands that we agonize with Mariane in order to find a way to help us understand how to cope with the barbaric butchery of a loving husband and soon-to-be father.

The reason the movie fails so spectacularly is because the message it sends is one that is antithetical to the true meaning of Daniel Pearl's martyrdom.

The director has a personal agenda that will not allow this murder to be viewed in the context of Muslim Jew-hatred.

The monsters who beheaded Pearl, then hacked his body into ten pieces and proudly filmed his execution, clearly explained their purpose. The video they released of their victim's final moments was titled "The Slaughter of the Spy-Journalist, the Jew Daniel Pearl." Before being murdered, Pearl was forced to say, "My father is Jewish. My mother is Jewish. I am Jewish." Being a Jew was his "crime."

Yet Michael Winterbottom, the director, inserts a prior scene where the man who organized the kidnapping is asked why Pearl was taken and responds, "Because he was an American."

Winterbottom has a personal agenda that will not allow this murder to be viewed in the context of Muslim Jew-hatred. His previous movie, "The Road to Guantanamo," stressed America's guilt as cause for the world's justified hatred of the United States, and Winterbottom hardly hides his feelings in numerous scenes brilliantly scattered throughout his newest film. Even before Pearl's kidnapping is known, we are shown a dinner party Mariane gives for her friends, with one extra place setting for Daniel who is glaringly absent and assumed at this point to be merely delayed. The guests engage in dinner talk and we are allowed a snippet of conversation from one of Mariane's Muslim friends: "What do Americans really know about Afghanistan and Pakistan... other than bombing them."

But that isn't all. We have to be told, although it's never verified -- it's offered as another "truth" that helps explain the terrorists' actions -- that the Wall Street Journal provided the CIA with computer files about the operations of attempted shoe bomber Richard Reid and his Al-Qaeda connection. Another scene overtly suggests that the treatment of Muslim captives at Guantanamo Bay prison directly caused what happened to Pearl. And a Muslim explains -- and no counter view is ever offered -- the Jews were responsible for the World Trade bombing because, as everyone knows, not a single Jew showed up for work there on 9/11!

Just in case you still don't understand the mantra that "It's not just them; we are all equally guilty," we are treated to the one scene of torture in the entire movie. No, it's not any of terrorists guilty of this cruelty. It's the hero of the movie who is trying to extract information while the American official can't hide his approval. According to Winterbottom, when it comes down to it, there really isn't much difference between us and the terrorists.

So what then are we supposed to learn from this story? Brad Pitt, who was so intent on producing this film in order to get out its message, put it this way: "We hope the film can increase understanding between peoples of all faiths and portray the story and the people involved without anger or judgment."

Note the key words. "Without anger or judgment." After all, who can judge morality? Who is to say that beheading an innocent must be condemned -- or even cause anger -- without taking into account that there must be "another side" to this action? It is the relativism of our age that makes it politically incorrect to label suicide bombers as terrorists, or killers as murderers.

Shortly after 9/11, a remarkable essay appeared in Newsweek written by a college student who could not understand the reaction of her contemporaries. Alison Hornstein wrote she was deeply troubled to note that just one day after September 11th her classmates seemed to be incapable of expressing any anger or even indignation at what had been the most successful terrorist attack of her lifetime. She struggled to explain to herself why her generation appears to be so uncomfortable "assessing, or even asking, whether a moral wrong has taken place."

And the answer didn't take long in coming. She realized that throughout her formative years her teachers were guided by a non-directive approach that consciously avoided presenting students with any ethical judgments. People were never bad; they were just different. Practices of other cultures could never be criticized; they could only be contrasted with our own as a valid and different life style. Alison understands now that "being taught to think within a framework of moral and cultural relativity without learning its boundaries has seemingly created a deficiency in my generation's ability to make moral judgments."

For her, September 11th was a watershed moment that opened her eyes to the realization that "Some actions are objectively bad, despite differences in cultural standards and values."

But that is something the makers of A Mighty Heart still do not grasp.

Here's how Angelina Jolie put it in one of her many PR interviews for the film: "Mariane is a person who has every right to be full of hate and yet she's completely the opposite. She wants to have a dialogue."

Daniel Pearl needs to be remembered as a victim of an ideology that does not seek dialogue but rather the destruction of its enemies.

Yes, a dialogue. A dialogue with those who have abandoned all reason. A dialogue with evil. A dialogue with the devil so that you can ‘understand' him while he wants only to glory in your death. Shades of all the Chamberlains at Munich who claimed "We can speak with Hitler" because they refused to acknowledge the full reality of his wickedness.

Daniel Pearl needs to be remembered as a victim of an ideology that is all too much still with us, an ideology that does not seek dialogue but rather the destruction of its enemies. Michael Winterbottom needs to be reminded of the classic story of two social workers who suddenly come upon a mugger severely beating a man he is in the midst of robbing. They watch the criminal mercilessly pound his victim to a pulp. Their hearts filled with compassion, they point to the mugger and mutually agree that in all certainty he really needs their help.

A Mighty Heart would do well to direct its compassion to where it is most needed. Fanatical Muslims still trumpet their vision of a world free of all those who share Jewish identity, as well as all infidels who persist in choosing to maintain their own "mistaken" faiths. Because of them, a "mighty heart" without the benefit of a realistic mind may well lead to the world falling victim to the same tragic fate that befell Daniel Pearl.

Inside Out & Emotional Integration

James Bond: 5 Jewish Facts
Blessing on Chewing Gum
Was Rahab a Prostitute?
Extras In Our Own Epic
Comments
MOST POPULAR IN Current Issues
Our privacy policy