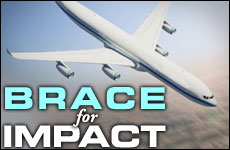 My emergency landing changed my life.

I was pregnant at the time, and flying to St. Louis to speak. I was making the final edits to the manuscript of my new book, "Remember My Soul: What to Do in Memory of a Loved One."

Soon after takeoff, the plane seemed to suddenly level off. I thought perhaps it was my imagination. I looked around and all the other passengers, mostly businessmen, were intently reading their newspapers and periodicals.

About 10 minutes later, the pilot, as calm as could be, announced that we had prematurely leveled off because of some technical difficulties that they were trying to correct. I looked around; no one seemed to bat an eye.

A few minutes later the pilot told us that due to a mechanical problem that cannot be corrected, they were going to have to turn back to Toronto. He assured us that there was nothing to worry about and that we would be rebooked on another flight.

Now my fellow passengers put down their reading material, but the look in their eyes was not fear, just annoyance. They were looking at their watches and mentally calculating how to rearrange their meetings. I was also trying to figure out which talks I may miss and how to contact Aish St. Louis to tell them about the delay.

We slowly turned back, banking through the heavenly clouds, and within a few minutes were told to prepare for landing. The plane made a regular descent, but just before touching down, it suddenly pulled up. The pilot could not land the plane.

I stopped a flight attendant who I had greeted warmly upon entering the plane and asked what was wrong. "The hydraulic system of the plane has failed."

"What does the hydraulic system do?" I asked.

"It flies the plane."

Someone else asked another flight attendant what was going on, and she answered with nervous emotion, "I don't know."

The captain, ever calm, came over the P.A. system again: "Well, that didn't seem to work. We're going to come around and try this again. Please listen to instructions from your flight attendants. We may have to make an emergency landing."

I look around and people were no longer thinking about their business meetings. Everyone's lips were moving. This was it. It was time to pray.

I closed my eyes and pictured the headlines:

My rabbi, Rabbi Noah Weinberg (may he live and be well), always teaches that the essence of prayer is: What do you want, and why do you want it? We usually stop at the first step -- what do we want – and forget to answer the underlying reason why we really want it. And the first answer to "why" is almost never the answer.

This was my moment with God. I wanted to live, but why?

God wants to give us what we want, but until we know why we want it, we may just pass it by or not use it properly.

Why? Why do I want to live to be the mother to my children? What can I give my children that no one else could possibly give them?

Now I was getting to the root of the matter. And then I made my deal with God: "If You get me out of this," I whispered to the Almighty, "and I live, I will dedicate myself to giving to my children the things that only I can give, and in gratitude I will do ____." I filled in the blank and promised to do a particular mitzvah (commandment).

The plane came around again and we went in for the landing. Looking out the window I could see the many flashing lights of the fire engines and ambulances waiting for us below. There was total silence on the plane. That one minute felt like an eternity, and thank God, we landed safely.

We disembarked like any other flight and they re-booked us on various airlines to St. Louis. I missed the first talk I was to give, but made the rest, and spoke publicly about the incredible opportunity God had given me to really examine what my life was about.

To this day, every time I do that mitzvah I promised to do, I am instantly back on that plane, and in God's Hands. I am clear, focused, and I know what life is all about. The impact of the experience was truly life changing, and it continues today.

I often tell people who have gone through something dramatic and are so filled with thankfulness to the Almighty, to ground that feeling by taking on a mitzvah. It doesn't have to be anything huge; a simple, small mitzvah done on a daily or weekly basis will take the gratitude and growth that came from the experience and keep it in your mind and soul forever. The last thing you want to do with such a message is to forget and lose it.

Chesley Sullenberger, the pilot of the ill-fated US Airways flight, told the cabin moments before crash landing, "Brace for impact." His words still apply. I hope the passengers indeed brace for impact -- and take to heart and sustain the clarity such a dramatic experience of survival can have on their lives.

Lori Palatnik is a writer and Jewish educator who has appeared on television and radio. She is the Founding Director of Momentum (formerly the JWRP) an international initiative that together with Israel's Ministry of Diaspora Affairs and over 300 partnering organizations worldwide, brings thousands of Jewish mothers (and now fathers) to Israel each year for a highly subsidized, 8-day transformational experience with a one-year follow-up program in their home cities. (www.momentumunlimited.org). She is a much sought-after international speaker based in Jerusalem. Follow Lori on Facebook, Instagram: @loripalatnik and Twitter: @LoriAlmostLive

Getting Rid of Toxic Phrases in the Home

Are You for Real? Greatness versus Grandiosity

Breakfast with Tzvi: Winning the Race

Principle of the Soul: #12 - The Deeper Meaning of Physical Intimacy

How to Tap into The Meaning of Sukkot: 5 Inspiring Life Lessons
Where Are We? The Body, Brain, Soul Problem
Dr. Sheila Nazarian’s Escape from Iran
The Miami Boys Choir is Taking over TikTok
Comments
MOST POPULAR IN Spirituality
Our privacy policy
Aish.com Is Looking for Great Writers