Shavuot and the Grateful Dead 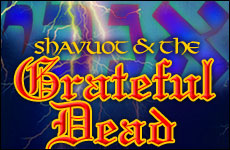 How I first received the Torah, bedecked in torn jeans and a tattoo.

Here's the thing about Shavuot -- we are celebrating the gift of the giving of the Torah to us, the Jewish people, on Mount Sinai. And since every single one of us, waiting at the bottom of the mountain with eager anticipation of this great gift, is , we all receive the Torah in the way we can best understand it. That's what I was explaining to my 7th grade Jewish studies class before inviting them to my third annual Shavuot dinner and late night learning session.

For four years, I was a Jewish studies teacher at a Los Angeles community day school (students are primarily from Reform and Conservative elementary feeder schools), where I started the tradition of inviting students over for a huge Shavuot feast that lasts until 11:45 p.m. The highlights of the evening include my various homemade cheesecakes (a traditional food on Shavuot) and the special guests I bring in to learn with us.

I accidentally started this tradition my first year at this school, when I was explaining to the class about the custom to stay up all night learning Torah on Shavuot as a tikkun (fixing) for the Jews who overslept the morning the Torah was given, instead of staying up all night with anticipation. I guess I made the all-night learning sound pretty cool, because when I jokingly asked if anyone wanted to join my friends and me, three students asked me if they could.

That first year, I had six current students, two former students from another school and about 18 friends. More friends showed up throughout the evening, and when the parents came to pick up their kids, they got caught up in the learning and stayed, too! Eventually, the kids and parents left and my friends and I went to our shul to learn with our teachers for the rest of the night. It was an unforgettable evening.

As I explained all of this to my current class, a mysterious smile crept across my face, as I remembered the first time I celebrated Shavuot . . .

It was 1995, and although I was exploring making Jewish practice part of my life, I hadn't yet made a full commitment to Torah observance. At that time, I was working in the film industry in Los Angeles, never even thinking of becoming a teacher. And I could barely boil water let alone make cheesecake!

I was in San Francisco to see my favorite band, the Grateful Dead. And it was Shavuot.

They told me to stop by after the concert, no matter how late, they'd be up learning.

Over that previous year, I had made some really great friends who were "Deadheads" too, but they were also Torah observant. They obviously weren't planning on being at the concerts, but they were heading to San Francisco that same weekend for Shavuot to learn with one of their favorite rabbis. They wanted me to come with them, but I was determined to see The Dead. So they told me to stop by after the concert, didn't matter how late, they'd be up all night learning anyway, maybe I could do some learning with them.

After an awesome concert, I asked the friend I'd gone with if we could stop by the rabbi's to do some learning. Even though it was 2:30 in the morning, she agreed (after I told her that there might be some nice Jewish guys there!).

I was expecting that it would just be a few of my friends sitting around casually with the rabbi, but when we showed up in our jeans, t-shirts and with "dancing bears" temporarily tattooed on our cheeks, we were very embarrassed. The house was overflowing with people, most of whom I didn't know, dressed beautifully and immersed in the holy spirit of Yom Tov.

In a mortified state, we looked around and quickly headed for the sanctuary of the kitchen. Our sigh of relief turned to dismay when we noticed we were not alone in the kitchen. A young guy with a beard, black hat, Oy! The only "holy" thing about me was my jeans!

Just as we were about to leave not only the kitchen, but the whole experience, the man finished what he was doing and said, "Nu? What was the set list? Was it a Jerry or Bobby opener?"

It's great that you're learning Torah; don't worry about how you're dressed!

My friend and I smiled the biggest smiles! We knew that he wasn't just asking what songs were played in the concert and if Jerry Garcia or Bob Weir sang the first song. We understood in our hearts that he was telling us, "It is great that you have come to learn some Torah and that you shouldn't worry about how you're dressed." We felt better. After all, this holy-roller was a "Deadhead" too!

So we went into a smaller room with some of my women friends who had come up from L.A. and began to learn the most beautiful Torah. We heard what we needed to hear. We understood it the way we could and should, right at that moment.

Every year on Shavuot, I am at a different place with myself and in my relationship to God, and each "receiving" of the Torah seems to magically fit the place that I am at.

My annual Shavuot dinner with my students are always very special. I have a lot of current students, former students and friends over with cheesecake, lasagna and laughter. We go around the table and everyone speaks about why the Torah is important to them. I watch with a smile as my friends' expressions revealed their awe at my students' lovely, deep answers. And I realize that for every Jew, "receiving" Torah is the greatest gift of all.

Survivor's Guilt: Covid, The Holocaust, and Sinai
Should I Break Up, Get Engaged or Keep Dating?
Time Is Your Precious Commodity
A Constant World in Flux
Comments
MOST POPULAR IN Spirituality
Our privacy policy