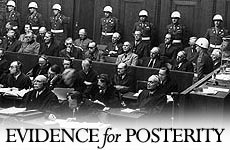 Witnesses age and die, and events such as the sinking of the Titanic or the attack on Pearl Harbor become more the stuff of books and movies than of real life, at least to young people. That's true even of the Holocaust, the subject of a growing flood of film and fiction. From directors George Stevens (''The Diary of Anne Frank,'' 1959) to Roberto Benigni (''Life Is Beautiful,'' 1998) and Roman Polanski (''The Pianist,'' 2002), the need for a palatable story can sometimes smooth away the jagged edges of history.

But last week the Harvard Law School library began to put the raw, unvarnished evidence of the Nazi horror before anyone with a personal computer. On a new website called ''Nuremberg Trials Project: A Digital Document Collection'' (www.nuremberg.law.harvard.edu), the library is digitizing and posting 82,000 documents, totaling 650,000 pages, in its collection of 120,000 documents (more than 1 million pages) from the Nuremberg war crimes trials of 1946-49. Not all the documents in the files will be posted, only those used in the trials. When the project is done, anyone will be able virtually to attend the trials, hear the testimony, and examine the evidence.

The trial transcripts and trove of supporting documents help yank the rug out from under the Holocaust deniers.

More important, to some historians: The trial transcripts and trove of supporting documents help yank the rug out from under the Holocaust deniers.

''It's an unbelievably constructive use of the Internet,'' says Deborah E. Lipstadt, professor of Jewish studies at Emory University and author of ''Denying the Holocaust: The Growing Assault on Truth and Memory.'' ''Before, these materials were not accessible. You could never browse them. To put material of this magnitude and importance on the Internet is a great step forward.''

There were 13 trials at Nuremberg; the first, of such major leaders as Hermann Goering, was conducted by an international tribunal. The other 12, held by the United States with American civilian judges and American legal procedures, involved lesser defendants but no less heinous crimes. One was USA v. Karl Brandt, et al., the doctors' trial of 1946-47 with which the Harvard project begins. For the use of the numerous lawyers and judges, multiple photostats of original documents, translated documents, and transcripts of the trials were made. After the trials, the National Archives and several American law schools, including Yale, Columbia, and Harvard, received complete sets of the documents.

Harvard got two sets, in 680 boxes, which were compared and in some cases combined for completeness, and for more than 50 years they were kept in metal file cabinets, available to scholars. They were difficult to use, however, because there was no index (the National Archives' set had an index, but scholars had to use sometimes-deteriorated microfilm). Of greater concern was that the paper of the 1940s was cheap, acidic, and decaying fast. ''After half a century,'' says Harry Martin, Harvard's law librarian, ''they became stiff and began to fade, and we said, `We can't let people handle them any more because they are crumbling.' ''

By having the whole collection digitized by Harvard's Digitial Imaging and Photography Group, Martin and his team of about eight library staffers would solve several problems. They would protect the originals by taking them out of use and storing them in a climate-controlled repository, and they would make the digitized versions available to all interested citizens, not just qualified historians.

They also tackled a third problem -- the massive size and unwieldiness of the collection -- by creating a digital index, so one can quickly search for names, subjects, or events brought up in the course of the trials. The index contains a full explanation of each document: who wrote it and its significance in the trial. Some of the evidence includes appalling photographs taken by the doctors during and after their grisly experiments on human prisoners, marked with a ''graphic image'' warning in the database.

Starting at the home page, users can click ''search the collection,'' then insert a word such as ''altitude,'' and in a few clicks come to an index item for an English translation, used in court during the doctors' trial. It is an affidavit by Nazi doctor Brandt, Adolf Hitler's personal physician and Nazi commissioner for sanitation and health.

Another click and the faded, typewritten document itself appears. In the affidavit, Brandt describes the genesis of the horrifying experiments in which German, Polish, and Russian prisoners were subjected to agonizingly painful low-pressure chambers to find out how the human body tolerates high altitude, for the benefit of the German air force. Brandt's tone is bland and chilling.

The reader can also absorb the case chronologically, following the trial transcript, and where a document or exhibit is mentioned by counsel, clicking on a link to the document.

Harvard's is not the only such project, although its scale and its index make it the most ambitious. Yale has digitized and posted documents from the international tribunal, and Rutgers has done so with documents relating to persecution of minorities. The Holocaust History Project (www.holocaust-history.org), headed by Harry W. Mazal of San Antonio, Texas, is also scanning and posting vast numbers of documents.

Scholars say an important function of such projects is to confront the Holocaust deniers, whose influence conceivably could grow as eyewitnesses die off.

''The deniers use search engines and the Internet to good effect,'' says Deborah Dwork, author of several books on the Holocaust and director of the Strassler Family Center for Holocaust and Genocide Studies at Clark University in Worcester. ''Young people -- high school or college students -- who use search engines naively, often come to denier sites. Sites like Mazal's or Harvard's are extremely important in countering those sites, because they have the actual documentation.''

''It's hard to overestimate the importance of these documents.''

Still only in the early stages, the Harvard site has available about 7,000 pages, representing about a third of the doctors' trial. Martin hopes to have the whole trial online by the end of the year. Completing all the other trials will take as long as 10 years, he says -- assuming $6 million to $7 million can be raised. (The work thus far has cost about $200,000.)

''It's hard to overestimate the importance of these documents,'' says George J. Annas, professor of public health law at Boston University and coauthor, with Michael A. Grodin, of ''The Nazi Doctors and the Nuremberg Code.''

''They make these events much more immediate and real,'' Annas says. ''Some people might have a tendency to doubt these things really did happen. Even at the time, the trials didn't get much press in the United States. Many people just wanted to get back to civilian life. But even in the opening statement [in the doctors' trial], Telford
Taylor, the American prosecutor, says one reason we are doing this is to show the truth of these incredible events, not only to the German people, but to everyone, so that no one can ever doubt that they were fact and not fable.''

Reprinted with permission from the Boston Globe.