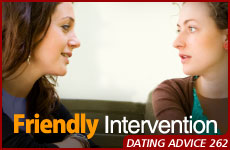 She's concerned that her engaged friend is headed for a troubled marriage. Should she try to stop it?

Your recently gave me advice and -- guess what -- I became engaged! This time, I'm asking for advice about how to help a friend of mine. She, too, recently became engaged, but I'm really concerned about what is going on between her and the man she plans to marry.

I see that he doesn't treat her right, doesn't show affection, and puts her down in public. My sense is that she is in an abusive relationship. I'm not the only person who feels this way. A few of her best friends have been worried about her since they began to date a couple of years ago.

They're getting married in eight weeks. As a dear friend who feels she deserves the best, what should I do? Is there a point where I should interfere, or is it too late (because perhaps she won't listen because she's in denial)? How can we stand by when we're so worried about her?

You're right. It's difficult to know what to do when someone you care about is involved in a relationship that you don't believe is healthy… and which you think may be emotionally abusive. Does your friend really need your insight in order to be able to see her situation clearly? If so, should you intervene, rather than allow your friend to blindly enter into a marriage that may be or may become abusive, or may simply be ill-advised? Or is your friend's relationship none of your business? If you speak up, will she listen to you? Is it possible that she'll become angry at you and end the friendship?

When close friends feel something is amiss, they're usually right.

From the perspective of our own decades of experience in interpersonal relationships and family law, we will say this: When more than one or two close friends or relatives feel uncomfortable about the way a couple is interacting, it's usually an indication that something is amiss. It doesn't necessarily mean that the relationship is an abusive one, but it does mean that there's a problem that should be addressed.

It sounds like what you and your friends have observed does indicate the presence of emotional abuse, or a way of interacting that will become emotionally abusive in the near future… or physically abusive as well. It could be a sign that your friend's fiancé doesn't respect her, or that there's another serious defect in the foundation of their relationship that will become a significant challenge to their future marriage.

It can also indicate that your friend's fiancé is sorely lacking in relationship skills because he never learned how to treat a woman properly, and might greatly benefit from counseling.

We can understand your not wanting your friend to get married under any of these circumstances. If there is a chance that she will listen to your concerns and do something about them, we would encourage you, as a group, to approach her on this. But you'll have to use a great deal of planning, sensitivity and diplomacy.

We suggest that the group of concerned friends get together to discuss what each of you has observed between the couple, and why it concerns you. Make a list of what you've observed and why each incident worries you. Stick to the facts, and be aware of when the conversation is digressing from its constructive purpose, to lascivious gossip. Because Jewish law forbids us to engage in gossip, during your meeting you'll need to be mindful that your sole purpose is to clarify the issues that you will present to your friend.

Next, discuss a strategy for how to approach your friend. We recommend planning to meet with her, as a group of no more than three, in one of your homes. It may be a good idea for at least one of those friends to be married or engaged herself. Keep in mind how sensitive you have to be, because no matter how delicately you speak, you'll be criticizing the man she cares about, and challenging the decision she made to marry him. You don't want to put her on the defensive (such as by suggesting or insisting that she break her engagement), as she will likely put up a wall and refuse to listen.

One possible way to introduce the discussion is as follows:

We came over tonight because we love you and care about you. We see how caught up you are with the wedding plans, and we want you to have a happy marriage. But each of us has seen a few things that we're concerned about. We wanted to talk to you about them now, before wedding plans get even crazier, so that you can consider what we have to say and perhaps do something about it.

You can explain that she doesn't owe you an explanation for anything, and she doesn't need to defend her fiancé to you or rationalize what's happened. All you want her to do is think about your concerns, and decide for herself if she wants to do talk about them with you or someone else, or get to some help in deciding how to deal with them. It may be helpful to give her information about resources she can turn to, such as a particular counselor or rabbi who helps people grapple with relationship questions.

You could suggest that she and her fiancé attend one of the workshops run by the Shalom Task Force or by Prepare and Enrich, which are both designed to help engaged couples learn healthy ways to relate to each other and build a good marriage.

Once you have decided on a plan, but before you implement it, we suggest that you speak with a knowledgeable rabbi. There are some issues of Jewish law that relate to intervening when a couple is already engaged. The rabbi will want to know what you and your friends have observed, and whether you think the future bride will listen to your concerns. He may also have helpful suggestions for you, and may want to speak to the couple himself.

She cried with relief when others voiced the concerns she'd been too afraid to confront.

Sometimes, these "interventions" are very helpful. One group of friends confided their worries to the bride-to-be's parents before all of them sat down to speak with the young woman. She cried with relief when she heard others voice the very concerns she had been too afraid to articulate… and then admitted that her fiancé had been hitting her. That evening, she was able to summon the courage to end the engagement.

In another case, a prospective bride admitted to her friends that her fiancé meant well, but never had the right role models to learn from. He actually wanted to learn "how to be a good husband," and the couple began counseling that continued well into their first year of marriage.

And sometimes, the intervention doesn't work. Your friend is an adult who is free to make her own choices. She may thank you for your concerns, and then continue on into the marriage without addressing these issues. She may refuse to listen to you or deny there is anything wrong. You may also lose her friendship.

Intervening in a friend's personal life comes with certain risks. Your group may decide that you are willing to take that risk, because there is a good chance that it will help.

Mazel tov on your own engagement, and we wish you success in helping your friend navigate the dating maze.

Dating Advice #144 - The Great Social Divide
Don’t Believe in Other Gods Versus God is One
Seeing Without Eyes
Why Shouldn’t We Eat Whatever We Want?
Comments
MOST POPULAR IN Dating
Our privacy policy
Aish.com Is Looking for Great Writers