In the Eyes of a Newborn Baby 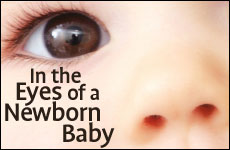 Reflections on worry and hope.

Our month-old baby Yoel wasn't happy. In the middle of our weekly date to one of our favorite Jerusalem restaurants, my conversation with my husband was interrupted over and over by Yoel's insistent crying. I tried feeding him, patting him on the back, giving him a pacifier, but nothing worked.

Yoel wasn't happy, and I wasn't either.

Then the restaurant's owner, Mazal, whom we know from many past dates, approached our table. Mazal, a grandmother many times over, put out her hands and said, "Let me take him" with such total confidence that I knew there was no point in arguing.

She took Yoel in her arms, looked him carefully in the face, and declared, "He needs some air, I'll take him on a walk." Then she put little Yoel back in his baby carriage, and I watched through the window as she walked him back and forth, back and forth in front of the restaurant for the rest of our date.

Afterwards, when I thanked Mazal, she insisted, "Don't thank me, I should thank you! You made my day!"

The next day, once again, Yoel started getting antsy in his carriage at the corner store, so I balanced him in one hand and chose out packages of milk and yoghurt with the other. As I struggled to pick change out of my purse with my one remaining hand, the owner, a young father named Elitsur, eyed Yoel with concern from behind the counter. Once again, arms were extended towards my son. "Give him to me," Elitsur insisted.

Spending the past month as a newborn's constant companion has meant discovering good-hearted people in every crook and cranny of my life.

"Yoel, what's the matter? Yoel, don't cry!" Elitsur pleaded. Even after I had paid him, Elitsur continued his one-sided conversation with my son. It was as though the rest of the world ceased to exist until the woman behind me in line complained that she was in a rush.

Spending the past month as a newborn's constant companion has meant discovering good-hearted people in every crook and cranny of my life.

At the same time, it has also meant opening up my heart to a flurry of new worries.

As I see Yoel staring out into space with his helpless brown eyes, I find my own mind wandering as well to the less hospitable corners of this world where my little Yoel will grow up. My mind races with thoughts of terror attacks, and car accidents, and Polar icecaps melting at an alarming rate. Worst of all, my pulse quickens as I remember that in only 17 years and 11 months my beloved son will, almost certainly, be wearing an Israeli army uniform.

And then I look deeply into Yoel's eyes again, and I see something else. In his eyes, I see a reflection of the beautiful corner of the world we live in.

In Yoel's eyes, I see the loving and concerned faces of my husband and me, and the faces of his four devoted sisters as they squeal with excitement when they offer him a new toy. In his eyes, I see Yoel's adoring grandparents who held him in their arms when they came all the way from America and Canada in order to greet the newest member of their families. In his eyes, I see the reflection of two great-grandfathers named Yoel who are surely looking down from the World to Come at this little Yoel with great pride and anticipation.

There are good reasons to worry, there are even better reasons to have hope.

In Yoel's eyes, I see the dear friend who secreted away his four older siblings to feed them lunch when I was overwhelmed and exhausted on my first day at home after the birth. In his eyes, I see the friends who have stopped by to drop off bags full of blue baby clothing, a much needed donation for our first son after four daughters.

In Yoel's eyes, I see the women of our community, the mothers of Yoel's future playmates, as they arrive at our door day after day bearing Tupperware containers filled with meatballs and tuna casserole and lentils with rice. In his eyes, I see the hundreds of people who crowded into the municipal bomb shelter that serves as our synagogue in order to celebrate his circumcision and to welcome him with song into our community.

In Yoel's eyes, I see this bomb shelter, a place of fear and despair, transformed that special morning into a place of holiness and friendship and unwavering faith in a better future.

When I see the world reflected in Yoel's eyes, I see a world full of sympathetic faces, and strangers bearing gifts, and neighbors who won't let his carriage pass by without sneaking a peek at our street's newest and cutest resident. I see our family, our friends, our community surrounding Yoel, forming a protective wall of love around our precious little boy.

When I look into Yoel's eyes, and I see reflected in them the blessed corner of the world we live in, I understand that while there are good reasons to worry, there are even better reasons to have hope.

The Language of Love

Knocked Out by the Flu