The Jewish Ethicist - Stereotypes and Prejudices 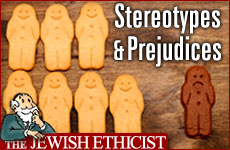 Am I a racist?

Q.I try and judge people objectively, but recently I learned an acquaintance was from a different ethnic background and I was dismayed to see that it completely changed my views on her. Is such "racial profiling" an ethical deficiency?

A. We have to distinguish different types of judgment. One thing we should make completely clear is that no condemnation of a person's goodness or righteousness should be made from our knowledge of his or her ethnicity. Every person is created in God's image, and is subject to the same yetzer tov and yetzer ra -- positive and negative urges. "God created man straight" (Ecclesiastes 7:29), yet also subjects him to various temptations. We, following in God's ways, can only judge a person based on their actions, not on their pedigree.

It is true that the Bible sometimes attributes specific moral failings to members of different nations. The offspring of Ham are considered fitted for servitude (Genesis 9:25); those of Ishmael tend to aggression (Genesis 16:12); and so on. However, already in the time of the mishna, about 2,000 years ago, our Sages inform us that mixing of nations by ancient empires has resulted in a situation where none of these tribal identities persist.(1) In a recent article, Rabbi Shalom Carmy gives two possible understandings of this development. The simplest understanding is that character is still a function of ethnicity, but that conquests have changed the map; old national characters disappear, new ones arise. But he also suggests a deeper explanation: "The rise of empires . . . destroys these identities and also undercuts the automatic equation of ethnic identity and individual character." (2) The advance of civilization leads to a new, more cosmopolitan ethical reality in which "racial profiling" is unjustified.

However, that doesn't mean that we learn nothing whatsoever about a person from their national identity. The Jewish prophets foresaw a future perfect world of universal brotherhood, but even this ideal reality still has a place for distinct nations. Isaiah (2:2-4) foresaw (italics mine, of course):

"And it will be in the end of days, the mountain of the Lord's house will be established as the head of the mountains, and elevated above the hills, and all nations will flow to it. And many peoples will go and say, come, let us go up to the mountain of the Lord, to the house of the God of Jacob, and He will teach us in His paths, and we will go his His ways; for from Zion will go forth the Law, and the word of the Lord from Jerusalem. And He will judge between the nations, and reprove the peoples; and they will beat their swords into spades and their spears into pruning hooks; nation will not lift up sword against nation, nor will they learn war any more." (2:2-4). And the prophet Zechariah, describing the same future, tells us that "all the families of the earth" will be bidden to ascend to Jerusalem and bow down to God. (Zechariah 14:17.)

Throughout history, people continue to find meaning and community in national groupings with common cultures. However, as time goes on nations do become more similar, and people are able to choose national identities to an increasing extent. Based on the words of our prophets, it seems to me that this grouping is an inherent part of God's plan for the world -- even for a perfect world. I believe that every nation does possess a particular national character and has a contribution to make to humanity. Just as every individual is and knows that God must have some special mission that only he or she can fulfill in this world, every nation is and has a role. That doesn't mean that every member of each nation exemplifies this characteristic, but it does mean we can expect certain differences in attitudes and experiences from people of varying backgrounds.

My conclusion is as follows: if your "revolution" in the perception of your acquaintance is a value judgment -- you previously interpreted her acts in a positive light and now find yourself inclined to judge them negatively, or vice versa -- then your personal "racial profiling" is indeed inappropriate. You can't judge a book by its cover, or as our Sages stated, "Don't look at the cask but rather at the wine inside". (3)

However, if as a result of knowing this person's ethnic background or national identification you have an altered perspective on her attitudes, or her personal struggles, then this gestalt shift may be justified. The white, patrician, Episcopalian David Souter and the black, self-made Roman Catholic Clarence Thomas are both outstanding legal scholars and preside side by side on the US Supreme Court, yet each arrived at his exalted position from a distinct background, and each one's background contributes in a way to his scholarship and judgment. I could hardly imagine someone writing a purely legal biography of these scholars without some reference to their ethnic background and upbringing.

The Jew in the Boardroom