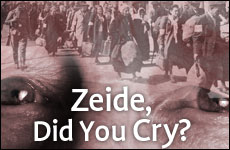 My grandfather's gradual descent to Auschwitz.

Zeide, I'm sorry I never met you. My father tells me you were kind. You lived for your family and treated your children like precious jewels. Everyone in your town knew that they could count on you for whatever they might need. You learned Torah at every chance. Your love of God was inspiring.

You always had a smile on your face, but that changed in 1938. Your hair turned white. Your hands started to shake and your smile left your face, never to be seen again. But Bubby said you didn't cry.

In 1938, you were fired from your position as a university professor because you were a Jew. Having no way to earn money, you got a job as a packer in the local market. Sometimes you weren't able to put food on the table, but Bubby said you didn't cry.

In 1939, pogroms were a daily occurrence. You and your family were unable to come and go as you pleased. You were terrified that any day you or one of your sons might be taken as you snuck off to shul. But Bubby said you didn't cry.

In 1941 having decided to leave, you tried to get the money together for you and your family. There was no one from whom you could borrow. You would have to wait and save which would take years, but Bubby said you didn't cry.

In 1942 you sold the gold menorah that your zeide had given to you. Even with that money combined with what you had saved, you had only enough to send two of your children out of Europe. You could not choose, and decided that all of you would stay together, even though you heard stories of Jews being taken daily, never to be heard from again. Bubby said you didn't cry.

In 1944 you and your family were dragged into the streets. You stood there for two days, without food or water. You were thrown into the cattle cars like animals. You arrived at Auschwitz and were separated from your wife and daughter. You stood in line and watched as your sons went to the right, while you were sent to the left. You kissed your sons for the last time and told them to be strong. You marched into the gas chambers and heard the tortured cries of your fellow Jews.

As you took your last breath to say the Shema, Zeide did you cry?

The author lives in the United States, and prefers to remain anonymous.

What Happened to Me in Auschwitz

All My Mothers: The Story of Yehudit Kleinman
The Softball Player
How This 6 Generation Bread Baker Brought Back Israel’s Ancient Grains
Olivia Newton John’s Grandfather was a Nobel-Prize Winning Jewish Physicist
Comments