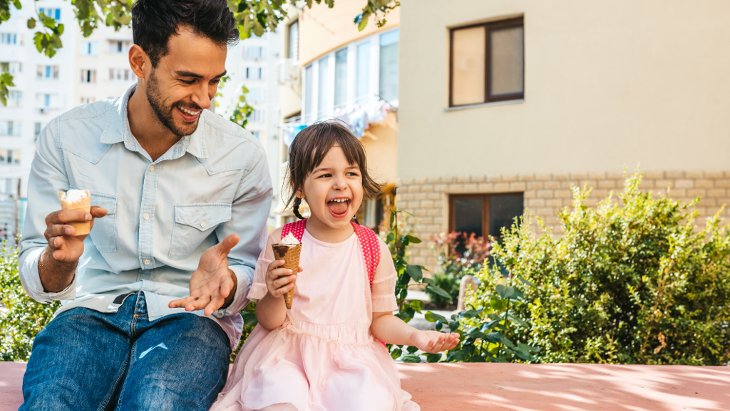 Sometimes the best parents aren't the one you're born with.

I'm not the only kid in the world who grew up without a father. The truth is, I had one – he just wasn't around much, and when he was, he wasn't particularly interested in "Dad"-type things.

Although I don't think he intended to be the sort of father he was, I ended up pretty much without one.

Something was missing, terribly, but I didn't know what it was.

All I knew was that I would occasionally mist up if I saw a father playing with his daughter in a park, or that I felt a deep, gut-wrenching longing watching the dad of a family I babysat for take care of his daughter.

Growing up, I used to observe my friends' fathers carefully. They were like exotic birds – strange and alien, but sort of oddly beautiful. There was something more settled and more secure when they were around, and even when they weren't around, the sense of comfort remained.

My next-door neighbors' father was always barking at them to do their chores, and their mother was always threatening to tell their father if they did something wrong. Even though he intimidated me, I envied them. They had discipline and learned self-restraint, dignity, and control. Their world was a safer place than mine.

When I was 11, my parents separated. Besides the legal partisan warfare and some financial shifts, my father's moving out of the house didn't have much of an impact on me. It wasn't until a year or so later that I felt the impact: My mother started to date.

Not too long after, I acquired something new: Jim.

Jim was the first guy my mother dated after my dad. We actually already knew him; he and his ex-wife had been members of the same synagogue as my family prior to their divorce several years before and his daughter had been a friend of mine when I was younger.

I remember, at 10 or so, how he would dutifully roll up (in the boat-like white sedan I would eventually come to know so well) two or three times a week to spirit her off for father-daughter time. And I would wonder to myself, what did fathers and daughters do?

Then, all of a sudden, a few years later, there Jim was in my house, with his big feet parked on my mother's coffee table, the sort of drinks he likes in the fridge, and – my ears! my ears! – Country music tapes stuffed into the living room stereo.

The next few years were open warfare. My brother and I resented the sudden realignment, and his daughter – my friend – wasn't so fond of her new step-mother either. The Brady Bunch we weren't.

He was like a big pillar stuck by some non-aesthetically concerned architect in the middle of a room. I didn't much like it, but I had to admit that it was holding up a lot.

Jim? I couldn't stand him.

It's a funny thing, though. Throughout high school, in between the huge blowouts or battles we'd have that lasted for weeks, Jim and I had some sort of strange friendship. He was like a big pillar stuck by some non-aesthetically concerned architect in the middle of a room. I didn't much like it, but I had to admit that it was holding up a lot.

When I was a nervous wreck the morning I started high school, Jim sat at the breakfast table and listened to me worry that I would be lost at the big school. My mother cooed soothingly, but he helpfully suggested that I affect a colossal limp and exaggerated lisp in order to distinguish myself from the masses. Later in the day, I stood in line at the intimidatingly large bookstore with a smile on my face – remembering his gimpy march around the kitchen.

When my mother's nerves were too frayed to handle teaching me to drive, it was Jim who bravely climbed into the car (and, unlike my mother, didn't repeatedly stomp a ghost brake on the passenger's side floor). It was particularly impressive, considering that we probably argued half the ride.

I resented my friends for liking him, although it wasn't surprising. His sense of humor is like no other – caustic, pointed, and clever beyond words. He has a way of talking to everyone – especially kids – that makes them feel comfortable, recognized, seen.

My mother is one of the most overwhelmingly affectionate people on the face of the earth; she can make anyone feel like the most important person in the world. Jim's energy is different – he doesn't overflow with sweetness (to the contrary, his charm is best described as Walter Matthau-esque), but his humor is a force powerful enough that everyone wants to be around him – if only to hear what he might say next.

He could hold forth on pretty much anything, especially when it came to anything Jewish. He and my mother shared a bedrock devotion to their faith, people, and country. I inherited my mother's emotional, gut-level ties to Judaism, but I passively imbibed Jim's political tirades, cultural exegesis, and ornery rants about whatever issue was on his mind. Our constant battling ensured that I really thought through whatever positions I was taking; Jim made me think.

The only thing he is more loyal to than the Jewish people, I suppose, is his family. Looking back, with all the clashes we caused and participated in, I see that he and my mother had a similar approach to their children: a feral kind of love. And a lot of the tension between us stemmed from his fury at the disrespectful way I would sometimes treat my mother.

Through his forceful love and loyalty, I saw that a father's fierce devotion is just different than that of a mother's. (And that's why kids need both.)

The truth is, even though we spent a decade or so clashing on and off, I always liked Jim (when I didn't hate him). And though I never would have admitted it, I was insanely jealous of his devotion to my step-sister. By the time we'd all mellowed out, that friendship stayed – as did the respect.

Jewish tradition commands us to respect (or even fear) our mothers and love our fathers. The Sages explain that the Torah phrases it that way because it's a natural thing to love our mothers, whereas we need to work on the respect part. But we naturally respect our fathers.

Fathers give us a place in the world.

Fathers, somehow, put us on the right course. Sociologist Judith Wallerstein has shown that only half of the boys she followed in a study of divorced families completed college. Some 40% drifted through life, out of school and unemployed.

In a 1987 study for the University of Michigan, Neil Kalter, Ph.D. found that girls from divorced families had a harder time developing a sense of being valued as a female: they missed out on the day to day experience of interacting with a man who is attentive, caring and loving.

Fathers give us a place in the world.

Once, when my mother was out of town, Jim joined me and some friends for Shabbat dinner. At the evening's end, a friend's husband, who knew my family history but hadn't met Jim, said, "Wow, it's so funny that you don't look like your father but you're so much like him."

He was shocked. "But your humor, your worldview… you're so much alike."

The values I use to guide my life come directly from Jim. The way I look at the world comes from Jim. Even whatever sense of humor I have… it's all from Jim.

Even though I will never know what it is to grow up with the sort of paternal devotion and concern that my step-sisters did, and I still get a little misty watching my male friends take loving care of their daughters, Jim managed to give me something else.

A few months ago, he had a brief medical scare and I guess it made him somewhat philosophical. We were chatting on the phone and his voice suddenly dropped.

"I just want to tell you something," he said, in a strange tone of voice. "I think you already know this, but I want to say it anyway."

I wondered where on earth he was going…

"I just want to say that, if, God forbid, anything ever happened to your mother… you know that I would still be here, right?"

"I would always be here, and be a part of your life."

I nodded into the phone.

He will always be in my life, always there for me. And I will always respect him, and be grateful for all that he gave and taught me.

Please pray for the well-being of Yaakov ben Devorah

Last Dance
Bechukotai 5782: Divine Retribution
Behar 5782: Working to Live or Living to Work?
The Wholeness of Being Broken
Comments
MOST POPULAR IN Heart of Matter
Our privacy policy