Why are Tears Salty? 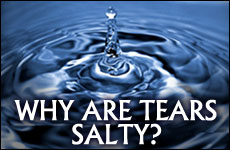 Paradoxically, tears can represent both longing and homecoming.

Every family has its own pattern of growth, times when children begin to take responsibility, times when they go off to school, times when they marry, etc. In our family, the children typically left home at a young age to receive a more intensive Jewish education in schools on the east coast. They grew up, got married, and with the exception of Rabbi Benzion, who lives in Milwaukee, settled in different parts of the globe. Their coming home is limited to holiday visits or an occasional vacation.

Our son Mordechai was the exception. For a variety of personal reasons, Mordechai came back home as a young adult and spent almost three years with us. Although his presence in Milwaukee was due to unfortunate circumstances, he was an absolute delight to have around. His constant good cheer, exuberant personality and gracious helpfulness were a constant source of sunshine, not only to us but to the entire community.

Like all parents I wanted what was best for Mordechai, and prayed daily that the Almighty alleviate his situation and orchestrate events such that he would be able to move on and have a good life of his own. The Almighty graciously heard my prayers and sent him a wonderful wife, and we trust that, with God's help, the two will have a blissful life together.

Then something strange happened. Grateful as I was to have my fondest wishes on his behalf realized, I found myself missing him dreadfully -- his lively spirit, his carrying in my groceries with such a sense of privilege, his running up and down the steps on errands countless times without complaint (in fact, my knee problem has flared up again since he left!), his computer literacy that took care of the formidable volume of emails and airline ticketing needs... the list is endless.

Necessary losses, I told myself, as I moved throughout the rooms of the house, now empty of his effervescent presence.

The Shabbos table is not the same without him. Every step along the way was punctuated with sensitive attention and consideration to spare me whatever wear and tear he could. Necessary losses, I told myself, as I moved throughout the rooms of the house, now empty of his effervescent presence, involuntary tears coursing down my cheeks. Looking Heavenward, I apologized to the Almighty. "Don't take me seriously, dear God," I said, "I am really genuinely thrilled that he is on his way to where he needs to be and I'm ever indebted for Your continued kindnesses. Please disregard and forgive my petty tears."

Concurrent with the experience of Mordechai's leaving, I began to have dreams filled with my children in their childhood and formative years. One night I had just dozed off (no small feat for me -- I am an incurable insomniac), and I was transported back in time where Yankie, my 26-year-old son who lives in Jerusalem, appeared as his adorable seven-year-old self, consummately funny as he always has been. He pulled one of his usual outrageous pranks and, in my dream, I convulsed with laughter. I laughed so hard that the sound of my own laughter woke me up and, predictably, sleep eluded me for the rest of the night.

I didn't pass up the opportunity to call Yankie in Israel the next day to scold him for interrupting my sleep with his antics, and I began to think about those precious years that have flown by so quickly and are now only retrievable in memory and dreams. Did I relish those darling little children sufficiently at the time or was I too preoccupied with responding to the endless daily demands?

I can't turn back the clock and I am truly grateful for the gift of those wonderful years, but I would urge those for whom the chapter of raising young children is still relevant to pause more often in the midst of their business, and mindfully experience the joys at hand.

Secondly, the Mordechai experience has taught me greater empathy for empty nesters. Prior to this event, I had little patience for whining mothers whose children were leaving home on schedule in the natural, expected progression of their lives. "Be happy that your children have found appropriate schools or appropriate mates and just let go," I would advise. Perhaps my words today would be no different, but my heart resonates with greater understanding.

TEARS OF PAIN, TEARS OF JOY

Nothing in life is arbitrary. Around the time that all this was happening, the topic my husband chose for his morning Bible discussion was the Torah perspective on why tears are salty. He offered the following insight. In the book of Genesis, the events of Creation are chronicled according to days. At the conclusion of the first day the verse reads, "And it was day and it was night, day one."

The subsequent days, however, are referred to as second, third, fourth, etc. To be grammatically consistent, day one should have been referred to as the first day (yom rishon rather than yom echad) to align with second, third etc. The reason given by our sages for the exclusive departure in the case of the first day being referenced as "day one" was because it was on this day alone that the universe was in a state of oneness, wholeness, in total harmony with the one God.

The medrash informs that at this juncture in creation, the initial time of separation, the waters relegated to the lower realms wept bitterly over being distanced from God, their Source. In response, the Almighty consoled them with the assurance that on the holiday of Sukkot they would be reunited with Him with the libation of water offered upon the Altar. Additionally, salt, which is extracted from the waters of the sea, would accompany all of the offerings brought to the Temple. (Salt also accompanies the breaking of bread at the table in our homes, which today takes the place of the Altar.)

In this fascinating medrash, our sages are identifying oneness, closeness and connection to our Source as the triggers and causes for joy, and distance, separation, alienation and detachment are the components of sorrow.

Shedding tears is the most powerful key to unlocking reservoirs of blessing.

The tears that accompany our strong emotions are salty. As such, they represent the sea waters from which they derive -- the first of God's creation to suffer distance from the Source. Hence, whenever we experience loss (Heaven forbid) or a state of being distanced for that or whom we care about, salty tears are evoked, reminiscent of and joining us with the sorrow and the first loss experienced in Creation.

Alternatively, tears of joy are expressions of homecoming, of being reunited with the Source, the object of our desire, reminiscent of the homecoming that was the consolation offered to the lower waters.

Paradoxically, tears can represent both longing and homecoming. Tears, often experienced in response to the many human conditions of loneliness, sorrow and pain, are in their sublime form, an expression of yearning and longing, a prayer for homecoming and reunification with the ultimate Source. The gates of tears are never locked, we are advised. Shedding tears is the most powerful key to unlocking reservoirs of blessing.

In conclusion, it is my hope that the worst of our sorrows will be the empty nest created by our flock moving on to create their own healthy and happy nests. And may the tears we shed be the tears of joy signaling our ultimate homecoming speedily in our day.

The Other Man
The 21st President of the United States: Failure or Inspiration?
Hiding Their Jewishness
The Jewish Pope: Following the Questions Home
Comments