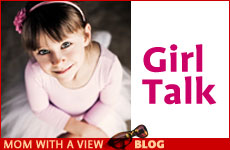 Is complimenting a girl on her looks so bad?

“Teaching girls that their appearance is the first thing you notice tells them that looks are more important than anything. It sets them up for dieting at age 5 and foundation at age 11 and [breast implants] at 17 and Botox at 23.” That’s Lisa Bloom’s theory and part of the motivation for her recent book, Think: Straight Talk for Women to Stay Smart in a Dumbed-Down World.

It’s certainly important for girls (and boys) to be valued for something much deeper than their appearance, their physical prowess or even their minds. Ms. Bloom is quite focused on respecting girls’ brains.

But I think we should all go a little deeper. We should respect their character.

Brains are a gift. Looks are a gift. Athletic ability is also innate. Some people waste their talents; we can applaud those who make the most of them.

But the real mark of a man – or woman – is who they are. Do they work on being patient, kind and understanding? Do they try to control their temper, roll with the punches and accept life’s frustrations? Are they focused on what’s best for those they love – helping their spouses, siblings, children, friends achieve their unique potential?

Those are the real things we want to teach our girls – and, in the interest of being non-sexist, our boys as well.

But I am still left with a question. In that context (and perhaps only in that context), is complimenting a girl on her looks so bad? Is it really a slippery slope whose only possible end results are plastic surgery?

I think there is a middle ground. I believe that we all – little girls and big girls alike – want to look good. And we want someone to notice. Looking nice is NOT the same as looking provocative. The early and over-sexualization of young girls is very troubling.

But when our daughters get dressed up – at 2 or 22 – they want us to appreciate how they look. It’s in the hardwiring – and not the socialization. Makeup, jewelry and perfume were in use in Biblical times, long before Madison Avenue and Vogue magazine.

The real problem occurs when the physical is the only thing that is valued, when other accomplishments are minimized and when, in its worst incarnation, it’s used to sell cars and beer (but we already commented on the inappropriate use of sexual appeal).

We want to raise our children to do their best and be their best. That means trying their hardest at school, at sports, at character development and even at looking presentable.

Frequently with girls we have to slightly de-emphasize their looks while boys require the opposite touch (I try to aim for the basics like tooth brushing and showering!).

But everyone wants to be appreciated when they make an effort on their appearance – girls in a nice outfit, even boys in a suit and tie. We just need to keep it in perspective, in its proper place, way below character and internal beauty. It’s a fine line but good parenting and good judgment requires us to walk it.

Ms Bloom advises us to “Model for her what a thinking woman says and does.” I would alter that advice. I think we should model what a righteous and dignified woman says and does. And I don’t think it can be forced or artificial. It needs to be a natural reflection of who we are. We have to work on our own values and character traits in order to communicate these ideas to our daughters.

We have to develop our positive qualities – our giving muscles, our loyalty, and our inner selves. And when we (hopefully) model these desirable attributes, it doesn’t hurt if we look nice at the same time. In fact, I think it helps.

Sticking to Your Resolution

You Cannot Be Anything You Want

Let It All Hang Out

Report Cards
Scientific Curiosity and the Divine Encounter
Mind Over Milkshakes
Love the Convert
Comments
MOST POPULAR IN Family
Our privacy policy
Aish.com Is Looking for Great Writers