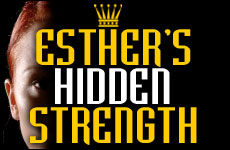 Esther was a lonely orphan who developed within herself the unusual qualities of piercing through veils and touching all hearts.

The holiday of Purim represents the best of times. It emerged, however, from the worst of times.

We were never closer to obliteration, both spiritually and physically. The hedonism of the prevailing Persian culture was part of the air that we breathed. It dulled our senses to the point that when King Achashverosh appeared in the garments of the High Priest of Jerusalem, presenting the treasure that had been robbed from the Holy Temple with the detachment of a museum curator, there was no protest.

We too had reached the point of being able to say, "How beautiful, how fascinating," when we once said, "If I forget you, O Jerusalem, may my right hand be forgotten." We were desensitized to ourselves, and to God.

God is the hidden character of the Book of Esther. His name is never mentioned. As the events were played out in real time, few were able to see His hidden presence.

One of the few was Esther. Somehow she had escaped the desensitization.

FROM LONELINESS TO STRENGTH

Let us look at Esther in order to find the place within ourselves that can help us always see -- like she did -- beyond the exterior facade that calls itself "reality."

Her father had died while her mother was still pregnant with Esther; her mother died at her birth. Thus, she came into this world with the gaping wound of belonging to no one.

Her cousin Mordechai, who later became her spiritual guide and ultimately her husband, took her in. The Maharal of Prague (16th century) tells us that the circumstances of her birth were no coincidence. Alienation and loneliness are tools like any others and are given to us to enable us to become who we can be. It was from that place of emptiness that Esther's profound attachment to God blossomed.

The root of the Hebrew word ester is saiter, meaning "concealment." Her name articulated her very essence -- the ability to pierce the walls of concealment and find God where others could not.

We often are deceived by the opaque nature of our interactions with God. He seemingly does not react when we go off the path. We are not stricken down by lightning when we make bad choices.

Similarly, we do not find ourselves suddenly richer or necessarily in better physical health when we choose to open our vistas to what is profound and eternal within ourselves.

The wicked seem to prosper and the righteous seems to exist with the same constraints as all the rest.

This is how it seems, of course, if we don't commit ourselves to penetrating the surface. Esther was a master at breaking through the walls that surround us. This was her weapon that she had taught herself in her years of solitude and yearning.

Esther had learned to see God wherever she looked. She saw Him as her only parent and she let His presence be her guide.

We all have our empty places. Rather than allowing them to lead us towards embitterment, let us use them as a ladder.

Esther had an additional name -- Hadassah. The Hebrew word hadassah means "myrtle," and it is one of the four species that we use on Succot. The etrog (citron) is shaped like and symbolizes the heart, the lulav (palm branch), the spine, the aravah (willow), the lips, and the hadassah are the eyes. Esther's eyes could see inner reality as clearly as our eyes see external reality.

Her name was not random, but rather it was the ultimate description of her strongest quality.

Let us look into the nature of the hadassah more closely to gain insight into Esther's nature, and ultimately into our own.

The leaves of the myrtle are uniform and green. If I were to name a child after a plant (which is highly unlikely), I would gravitate more to Rose, Lily -- or at worst Daisy -- long before I would call anyone Myrtle or Hadassah.

It is almost a command to aspire to inconspicuous mediocrity!

But the Maharal points out that her modest image embodied an internal strength. The image that Esther projected was one in which the superficial separations that polarize us played no part.

The greater our focus on the ness of our external identities (age, appearance, culture) the more separate we are from the unity and commonality of our internal identities (the need to love, the yearning for meaning and genuine achievement, fear of rejection and inner chaos). We become the children of one Father when we let ourselves see beyond the façade of superficial identity. It is our quiet commonality that bonds our hearts and minds.

The Talmud gives us a concrete example:

Esther was given seven maidservants, as was the court-custom. In order to remember when it was Shabbat she named them after the days of the week. In a society as stratified as ancient Persia, she could have easily dehumanized them by calling them Monday, Tuesday, Wednesday, etc. Nothing could be a greater insult to their human value.

So, instead, she named them after God's order of creation. One was Light, the other Transcendence, etc. They all ultimately converted to Judaism, even though that was far from Esther's intent. By becoming more aware of whom they really were, they were able to set their sights towards who they wanted to be. She succeeded in bringing them to a genuine awareness of their inner essence.

The Talmud rather cryptically tells us that Esther, like the hadassah was "green."

This does not mean that one would mistake her for Robin Hood or Lyle the Crocodile. Rather, her essence was symbolized by the color green.

Green is a color that is made up of two primary components -- blue and yellow. Blue symbolizes coolness and yellow symbolizes warmth.

Esther's inner light was a composite of two forces as well -- fiery sun-like passion and the cooling nurture of water. Because she had developed her own spiritual nature so completely, she could reach out to anyone and find within her the capacity to connect. Her "greenness" was the spiritual symbol of humility, responsiveness and sensitivity.

When we are able to peel away the layers of nonsense and glitz that are today's remnants of Achashverosh's palace, we will find the part of us that -- like Esther -- can pierce through any armor, even our own.

And then we will see God where we never believed He could be found -- in our hearts, in those of others, in the day to day events that form the tapestry of our lives.

The Two Sides of the Purim Mask