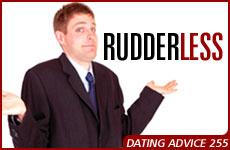 She's under pressure to get married, but this guy lacks confidence and direction.

My best friend and I have been through the worst and best of times together. She has married and started a family. I am still single at age 25. My friend wants nothing more than to have me "cross over to the other side" and join her in the world of being a wife and mother. Believe me, I want that very badly myself.

My friend means well and tries to set me up with eligible men. Recently, she set me up with a 30-year-old man who had wonderful character and was very kind. Obviously that is something that I look for in a husband. However, I realized over several phone conversations and a few dates that he lacks confidence. He is also unsure of where he sees himself professionally. He is very stable in terms of his life outlook, but I'm worried that he doesn't really understand what it takes to support a family nowadays. He seems to be an idealist.

I grew up in a large family, and started to take care of my own expenses at an early age to help my parents. I told my concerns to my friend who set us up, and she dismissed my concerns. I know that she only wants what is best for me, but sometimes she also would just like to see me married already.

As I explained to my friend, I am not asking for a man who earns an enormous income, rather I just need someone who will have a stable and realistic income. Am I wrong for feeling uncomfortable with someone who is 30 years old and unsure of where he wants to head professionally?

Your letter raises a question that many daters agonize over -- what to do when you're dating someone who has many qualities that you value and admire, but seems to lack "something" that you also believe is important. That "something" may be a character trait, life-goal, value-system, or even a physical trait. How much weight do you give that missing "something"? Can you be satisfied in spite of that absent quality and go on to build a fulfilling and successful marriage? What's the difference between being able to accept a partner in spite of his imperfections, and compromising so much that you settle for someone who really isn't right for you? Are you being too picky by deciding that the missing quality is something you can't do without?

We can phrase your question another way: If someone is a good, but less-than-perfect match, how can you tell if he is "good enough" to continue dating toward marriage?

The phrase "good enough" doesn't mean "just settle." It means, "I don't need everything to be perfect to have a very good marriage. There's so much about this person that I like -- and I'm okay with the stuff that I don't like -- and that's enough for me to want to spend my life with them, to be happy, and to want to make them happy." Believe it or not, this is a value judgment that is made by just about everyone who decides to marry.

People with an analytical nature sometimes have trouble seeing the big picture.

The decision-making process is easier for some people than for others. We can see from your letter that you have an analytical nature. People with this character trait sometimes get caught up in small details and have trouble seeing the big picture. We'd like to suggest a way to help you see the big picture rather than focusing only on one section of the canvas.

You describe a man whose temperament is different than yours. You grew up seeing your parents work hard to meet the material needs of their large family, and decided to begin working to pay for your own expenses and take some pressure off your mother and father. You developed a very practical orientation. The man you are dating didn't develop this same sense of "grounding." He may have come from a more privileged background, and may not have needed to pay his own way. Or his upbringing may have been more idealistic, and he may have been given the freedom to pursue his dreams without economic worry. The fact that your orientations are different doesn't mean you can't find a way to synthesize the two and build a good marriage.

We think that it would help for the two of you to discuss your expectations about economics and marriage. What kind of lifestyle would you each like to have? Where would you live, how many children would you like to have, how will they be educated? What kind of income will it take to have this lifestyle? What kind of financial contribution will each spouse be expected to make? How will each partner combine their work with time devoted to parenting, household tasks, personal enrichment, and involvement in the community?

Many people never give much thought to these questions -- because they never had to do so. Even 30-year-olds. The fact is that contemporary adults often settle down financially at a much later age than they did a generation or two ago. They sometimes settle into careers later, too. The next question is whether the man you are dating is ready to make the choices and changes needed to build the kind of relationship he wants with his future wife, and the kind of environment in which he would like to raise his family. If he says that he is ready, are his answers and expectations realistic ones? Is he learning about what it costs to raise a family and the life he aspires to? Do his ideas about career change make sense, and is it reasonable to expect that he can accomplish them? How fast is he willing to begin to make these changes, and how is he going about it?

He must be careful not to let this new sense of practicality smother his freestyle ways.

He must be careful, however, not to let this new sense of practicality smother his freestyle ways. How do his ideals fit into the picture? Are they still viable, or can he develop new methods of personal satisfaction that enable him to be a responsible husband and father? Perhaps he can find a creative way to achieve both -- such as working at a job that pays well but isn't as fulfilling as he wishes, and achieving that fulfillment by developing a hobby or pursuing an interest that gives him a sense of enrichment and accomplishment?

Incidentally, these are questions that any couple who is thinking about marriage should discuss. Too often, daters simply assume that the other person is on the same page as they are, only to find out later that their expectations about marriage and how to go about pursuing their goals are very different. So your well-meaning friend is mistaken when she insists that this is not a subject you should be concerned about. It's a subject that every couple contemplating marriage should address.

It could be that as you talk about financial responsibility, you realize that you and the man you are dating have very different expectations or incompatible ideas about how to provide for your family's economic needs. That's a clear indication that you're not right for each other, no matter how much you admire his character and personality. Good marriages are built on compatible goals, values and lifestyle expectations, and in the absence of these the relationship is ripe for clashes.

If, on the other hand, you find yourselves agreeing on major issues, and expect to take similar paths to achieve your goals, there are still some questions to ask: What role does his apparent lack of self-confidence play? Does he really lack self-confidence, and if so does it affect only his career choices, or does it extend to other aspects of his life? Can he move forward in spite of it, or does it hold him back from pursuing goals or from having the ambition he will need? Does he want to address this? How is he doing so? Will he need encouragement from me from time to time? Am I willing to give it?

We realize that we've given you a lot of food for both conversation and thought. These aren't questions that can be discussed, answered and resolved overnight. However, they also aren't subjects that should remain "open" for a prolonged period of time. In our experience, if they can't be addressed, worked on and resolved within a period of several weeks, they may never be resolved. That means that within the next few weeks, you should be able to reach a point of being able to say, "I understand where each of us is coming from, and I can be okay with the differences we have on this issue," or else decide that you are not able to accept or resolve the differences between you, and it is time to end the courtship.

If you need help resolving your feelings about the situation, the friend who set you up is not the right person to turn to for advice. We think that in this instance, it's hard for her to be objective, because she wants you to get married, and she wants the match she suggested to succeed. Another close friend (married, not single) would be a better choice to share your thoughts with.

Dating maze #284 - Mother Interference
Olivia Newton John’s Grandfather was a Nobel-Prize Winning Jewish Physicist
Don’t Believe in Other Gods Versus God is One
Seeing Without Eyes
Comments
MOST POPULAR IN Dating
Our privacy policy
Aish.com Is Looking for Great Writers