The Jewish Ethicist: Safe at Work 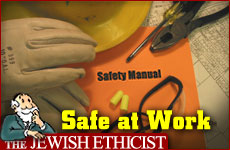 Workers can't be expected to be in a constant state of vigilance.

A. We find an explicit Torah commandment for a safe home. The Torah tells us that any house must have a railing on the roof (Deuteronomy 22:8):

When you build a new house, make a railing on your roof, and don't bring bloodshed on your house if someone falls from it.

The sages of the Talmud understood that the commandment is not limited specifically to a roof, but rather extends to any hazard in our everyday environment:

This refers only to one who builds What if he bought, or inherited, or received a house as a present? It says "house", of any kind. . . .

This refers only to a house. Where do I learn that it includes a storehouse? . . .

It says "don't bring bloodshed on your house", of any kind. Could this refer also to a gatehouse or a patio? It says "house", meaning a place of dwelling. . .

This refers only to a roof. What about wells and cellars and caves and fissures? It says "don't bring bloodshed into your house". Why then does it refer to a roof? To exempt a ramp. (1)

We need to make sense of the perplexing mix of inclusions and exemptions. For example, why should the commandment be limited to a place of dwelling, given that all kinds of hazards are included? We also need to put this commandment in the context of other commandments that obligate us to safeguard human life and well being, such as (Leviticus 19:16) "Don't stand idly by the blood of your fellow" and particularly "Take care and guard your spirit" (Deuteronomy 9:4).

The very prominent recent authority Rabbi Avraham Yeshayahu Karelitz (known as "Chazon Ish") tries to unravel these various strands. He explains that the general Torah obligation to preserve life can be fulfilled in two ways: either by creating a safe environment or alternatively by vigilance to avoid danger. A person climbing on a roof without a railing can still be safe if he exercises caution. Rabbi Karelitz explains that for occasional or exceptional hazards, for example the workmen who built the railing in the first place, vigilance is adequate. However, the Torah tells us that when it comes to a person's house, where he spends all his time, that is not sufficient. Physical means have to be in place to make the home a safe place even if a person is not exercising special vigilance. (2)

The same would apply to a workplace where people spend their entire day. Some particular workplace activities, such as operating heavy equipment, may perhaps be dangerous and require vigilance, but the sustained working environment must be a safe one. It is not reasonable that all workers are exercising special vigilance all the time.

Indeed, one recent authority, Rabbi Betzalel Stern, considers that a workplace is particularly commanded in this mitzvah, because people are absorbed in their work. (3) This harmonizes with the Chazon Ish. If a person is concentrating on his work, he will be careful with the special precautions directly related to his work, but needs to have any incidental distractions removed.

So the answer to your question is as follows: Any particular task that involves danger has to be carried out with the appropriate vigilance and safety equipment, such as goggles, harnesses and so on. This is part of the general commandment of "Take care and guard your spirit." But beyond this, there is a need to ensure that workers are protected from hazardous conditions during routine tasks. The Torah recognizes that it is unreasonable to expect people to be in a constant state of vigilance and thus it commands, "make a railing on your roof, and don't bring bloodshed on your house."

The Jewish Ethicist: Reconciling the Books

From Bear Stearns to Bava Metzia
What Makes Eli Run?
The Tyranny of Materialism
Science Enters the Mysterious Inner World of Consciousness
Comments
MOST POPULAR IN Current Issues
Our privacy policy