Lessons from the Coast of Nowhere 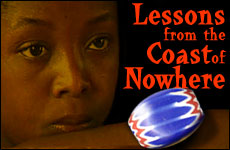 A young African child, whose family couldn't scrape together five dollars to keep him in school, has something most people lack.

In the nine months since I visited a tiny coastal town in Africa, I have continued to correspond with some of my fifth grade students there. They unceasingly amaze me with their generosity of spirit and optimism about the future, despite their crushing poverty and lack of access to even the most basic educational materials.

Young Joseph stood out when, in his first letter, he included a single bead as a gift. Beads are a prized local craft, and I let him know in my response that his present touched me deeply. In addition, Joseph was the only student in my school who did not wear a uniform, and although I had never inquired about it, I suspected he just couldn't afford it. So the gift of a painted bead was especially precious to me.

Months later, he wrote me a very different kind of letter. After a lengthy "grace period," the school was now insisting on the uniform, and had suspended him until he could procure one. Sadly, he reported that the required uniform would cost 40,000 cedis -- a prohibitively expensive amount for his family, but in our currency equal to approximately five U.S. dollars.

Without a uniform, Joseph would be unable to continue his studies beyond the fifth grade -- at least not now. I felt the crushing weight of his loss -- at best, a delay of months or years before he could return to school; at worst, a life of illiteracy in a country where only the best educated have a chance to break out of the cycle of poverty. Of course, with my next letter, I sent him the five dollars.

I also included one extra dollar bill which, I explained, was for Joseph to buy another airmail letter and let me know that he had obtained the uniform and was back in school. I knew the extra dollar was more than he needed to write to me, leaving him about 60 cents extra to spend as he wished.

A few weeks later, I was stunned to receive a letter from Joseph in a small package.

A few weeks later, I was stunned to receive a letter from Joseph in a small package. I was gratified to read that he had bought the uniform and was back in school. "I thank you very much for what you have done for me," he wrote, "and I do not even know how to thank you. If it were not for you, I would not have my school uniform. May God bless you and your family and also give you a long life."

I have grown accustomed to the flowery words of gratitude which accompany every letter from my students -- appreciation seems to be a national trait. But I was unprepared for what else the package contained. With the extra 60 cents, Joseph had purchased more beads, and made a necklace, a bracelet, and matching earrings for me, to show his appreciation.

I would have been happy if he had bought himself a small treat, or surprised his family with some fresh fruit or a few eggs. I probably would have preferred if he had bought some pencils or other small school supplies, or a gift for his mother who had recently broken her leg. I had wondered how he would use the extra money, but it had never occurred to me that he would use it to thank me.

I'm not much of a jewelry person, and beads are not really my style, but these have become the accessory I reach for first, and most often. I feel more fully human when I wear them, connected to a soul truly free of materialism. For a child who quite simply has nothing -- his family could not scrape together five dollars to keep him in school -- he has something most people lack. He knows that having a little more money, a few more things, would not change the core of whether he was happy or not -- and that the sincere expression of gratitude most certainly would. And that left him free to give the balance back in a gift.

In a season where we speak of freedom, these simple beads remind me of what is possible.