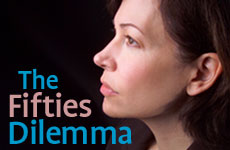 All the guys are passing her by for women 20 years younger. Is there a solution?

I have read many of the dating articles on Aish.com and I haven't seen this issue addressed. I am 55, healthy, active, and try to look my best. As a single mother of many children, most of whom are grown, I was thinking how nice it would be now to look for a real relationship instead of focusing on children all the time.

Since I live in a small city that doesn't have a large Jewish community, I started to use a popular Jewish dating site in the hopes that I would meet someone close to my age. A number of younger men view my profile, presumably not realizing my age from my photo. I'm flattered, but I'd like to meet someone who is my peer. But I find that most men in their late 50s won't even consider a woman anywhere near my age because they all want to start a family.

Are they crazy? What 30-year-old woman, with the physical, emotional, mental, and spiritual capacity of being a good wife and mother, is going to be tempted to meet a 58-year-old online? I can understand how these marriages sometimes take place, if they meet in person in a workplace or community setting and gradually decide they can overcome the age factor. But for a young woman to be interested from the start in someone her father's age? Please address this issue. Thank you.

Your letter came to us around the time that the article, " Still Not Married",
appeared on Aish.com. Judging by the many reader comments to that column, there are many people who share your view that a man in his 50s is unrealistic if he expects to marry a woman young enough to be his daughter.

It's true that May-December marriages sometimes happen. Marriages between people with a 10-15-year age gap are also not that common. Even though most women prefer to date men within a few years of their own age, some may be willing to stretch their self-imposed age limit for the reasons you stated in your letter. They meet an "older" man at work or in a social setting, get to know him, and decide they are attracted enough to deal with the age difference.

In most instances, the younger woman will be annoyed, rather than intrigued, when an ordinary, "nice" guy who is much older than her responds to her Internet profile.

On rare occasions, a younger woman may say "yes" to a suggestion that she date a man more than 10 or 12 years her senior. It's usually because there's something spectacular about him -- he may have amazing accomplishments, a dynamic or extremely engaging personality, or considerable wealth. In our experience, the larger the age gap, the more "spectacular" the man's credentials need to be for her to consider meeting him. And they have to be even more spectacular to consider marrying him!

What many unmarried men in their 40s and 50s don't want to acknowledge is that as the age gap between a man and woman increases, the harder it is for them to make a connection and develop a relationship. One reason for this is that their frames of reference are often very different. A more significant reason is that relationships that lead to marriage are built upon compatible expectations and goals, but when a generation divides a couple, their expectations and goals seldom match. They may have similar worldviews and may both want children, but that's where the similarity ends.

Let's look for a minute at what a 30-year-old woman may be looking forward to in 10 years' time. Some of her expectation may include having a number of children, being socially involved with other young parents, sharing parenting responsibilities with her husband, juggling parenthood and career (or putting her career on hold for a while and resuming it when the children are in school), planning family-oriented vacations, and saving for college. She may be active in her community as well, and may be devoting time every day to keeping herself physically fit and youthful. As her children get older, she may expect to become more involved in her community, have additional time to develop her profession, or start a new career.

What can a 50-year-old man expect his life to be like in 10 years? He may anticipate being able to keep up with a younger woman's energy level and with many active young children, but it is more likely that this will be somewhat difficult. He may look forward to travel or having his wife join him in leisure activities, while she will be busy with carpools, children's activities, and the demands of her career. He'll be more focused on saving for retirement than on setting aside money for college costs. His peer groups will be very different than hers, and it may not easy for them to find other couples they are both comfortable socializing with. He may begin to experience age-related health issues that she doesn't anticipate having to deal with for another couple of decades.

We're aware that we're generalizing, and that each person is different, but the fact is that these issues regularly arise when there is a large age gap between spouses.

We know that many never-married men in their late 40s, 50s, and even 60s long to be fathers and raise children, and we wish we could give them a magic solution. We'd also like to help the many never-married women in these age brackets who also wish they could be mothers. Unfortunately, we're not magicians and we have to be pragmatic. There comes a point where people may have to say to themselves, "I haven't been able to fulfill a very important goal in my life. It hurts me deeply, but I know that at this point, that dream is no longer possible. I need to mourn the loss of that dream, and develop a new one that will help me feel fulfilled and that I can realistically work toward achieving."

What does that mean for a 50-year-old man who has never married? Perhaps to acknowledge that he will not be able to be the natural father of a brood of young children; to decide to date women who are closer to his own age and who may or may not be able to have one or two children with the help of prayer and medical intervention; to consider marrying a widowed or divorced woman who is near his age and to join with her in raising her children to adulthood; or to look for someone he can love and build a life with regardless of whether they will be able to have a family.

We're mindful of the fact that Jewish law obligates to "be fruitful and multiply," and that some men focus on this when they seek younger women to marry. When it appears unlikely that a man will no longer be able to fulfill this commandment, it's a good idea for him to consult with a rabbi to learn about the many ways he can re-order his life, and perhaps fulfill other commandments in the process.

Now we'd like to offer you a suggestion as you search for a new partner in life. There are men in their 50s and early 60s who would be pleased to find a woman in their own age range, who have mostly grown children, and do not want to start a new family. These are interesting, well-functioning men who are aware of the challenges of blending families, and at the same time realize that they are more likely to build a rewarding new life with someone whose background is similar to theirs.

How do you find men like this? Through a lot of networking: current friends, relatives, college roommates and friends from the past, people from your former hometown, people in your synagogue, local merchants (such as your butcher, baker, Jewish bookseller), and connections you make through your adult children. You can make other connections through work and professional or trade organizations. It's also a good idea to get involved in charity projects, enrichment classes, or organizations that involve people from other cities or regions. You can even investigate travel opportunities; consider how far you'd be wiling to relocate (and what would be involved with relocating) and contact rabbis, rabbi's wives, matchmaking groups, and social organizations within the geographic radius in your comfort zone.

When you network, be prepared to present an "elevator pitch" -- this is a few sentences that describes who you are and what you are looking for in an appealing, truthful way. Know in advance how you will go into more detail and maintain the other person's interest if you are asked specific questions. It's also a good idea to be able to give a few names and telephone numbers of references (whom you have spoken with beforehand). And if possible, approach some friends or family who are personable, have insight, and can make time -- and ask them to do some networking on your behalf.

We'd also suggest making a change in your Internet profile to make it clearer about the age range you're seeking in a man (for example, 50-63, if that sounds good to you). In fact, it may be a good idea to have a friend look over the profile and see if there are other changes you can make so that more suitable men respond to it. You still may have to sort through responses from men who are obviously not right for you, but hopefully you will soon meet the one who is right for you.

Dating Advice #205 - Monster Fights
Vayelech 5783: Regret and Repent
Rabbi Sacks: Focus On the Important, Not the Urgent
Put Your Foot Down: Are Human Feet Poorly Designed?
Comments
MOST POPULAR IN Dating
Our privacy policy
Aish.com Is Looking for Great Writers