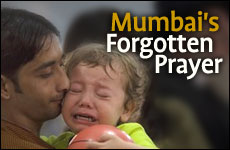 The power of Gavriel and Rivka Holtzberg's prayer.

So many of us were riveted to our television and computer screens, watching in horror as events unfolded on the burning streets of Mumbai. We held our breath as we witnessed the brave nanny, Sandra Samuel, running out of the Chabad House with Moshe, Gavriel and Rivka Holtzberg's two-year-old son, who was hanging on for dear life to the only familiar reminder left for him in a world suddenly gone mad.

Only the briefest mention was made of the Holtzbergs' two other children, and in each article I read, I searched for more information but it was always the same: "The Holtzbergs were no strangers to tragedy, having lost a child last year to a debilitating genetic disease." Most of the time, their second child, also suffering from the same disease -- Tay-Sachs -- but still alive, was not mentioned.

No one who hasn't been through it can understand what happens to a parent who is forced to sit by their child's bedside and watch them deteriorate until they die.

Every person approaches a situation from their own perspective: teachers judge by how educational it is, doctors by how healthy, lawyers by how legal. As a parent of children who suffered similarly, I viewed the Holtzbergs through those lenses. Our children suffered from a genetic disease similar to Tay-Sachs, but much less known and studied. Metabolic illnesses such as Tay-Sachs run a gamut, and I am always on the lookout for others who unwittingly found themselves standing in the unpredictable world of inborn errors of metabology. It's hard to explain to someone who hasn't experienced it. That's why it was this part of their story that caught my attention, as I desperately tried to make sense of their suffering.

No one who hasn't been through it can understand what happens to a parent who is forced to sit by their child's bedside and watch them deteriorate until they die. You can hold them, whisper to them words of prayer, even feed them up until a certain point, all the time knowing that there will be no medical miracles for you and that the end is inevitable. Anyone who has found themselves in this situation knows that, while it seems like they are just sitting there minding their own business, they are really undergoing a profound transformation, undetectable from the surface.

Once the shiva is over, the tears are dried up, and life somehow trudges on, the parents realize that they have been altered forever. Although the child was small, his soul was huge. Parents have been in hand to hand contact with this powerful force, without realizing the effect it was having on them.

I found myself unable to tolerate anything that was not essential, important, and true. The normal superficialities that cushion a life were gone, surgically removed without the benefit of anesthesia.

Although the Holtzbergs had so many things going for them -- supportive parents, loving families, excellent education, idealistic work -- it may have been this experience that sent them over the border from special to superhuman. Their laser sharp focus on doing for others defies logical explanation.

NO PRAYER IS LOST

A child, Moshe, was saved, miraculously so, even though he was not the one they were praying for.

And yet, despite the growth that parents who have lost a child undergo, an important question remains. I remember the months our babies dangled between life and death, we said hundreds of prayers for them, and many other people prayed for them as well. No doubt the Holtzbergs did the same. But if in the end the child died, where do all the prayers go?

A prayer is never lost. In the Holtzberg's case, I think we all merited to witness, with our own eyes, where those prayers went. A child, Moshe, was saved, miraculously so, even though he was not the one they were praying for.

As for Dov Ber, their other hospitalized child, I wonder who will sit and comfort him, sing to him, and remind him that his soul is a holy one? And who will pray for him and for an end to the terrible evil that made him an orphan -- if not we?

Choosing a Jewish Future
The Blue Beyond
Great Place to Live
Is Eating Supposed To Be Spiritual?
Comments
MOST POPULAR IN Israel
Our privacy policy