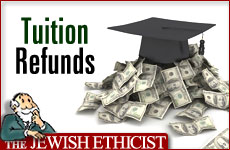 Q. Tuition at my school is non-refundable if a student leaves mid-year. Is this a fair policy?

A. Choosing a school, whether for a degree or for a year of Jewish study, is an involved and agonizing process, and most people find a framework which is suited for them. However, it is impossible to have complete information about the study experience, and in addition people and places go through changes over time. So it is not surprising that there are always a few people who regret their choice and want to leave their place of study in mid-year.

What is the fair reimbursement process?

The simplest way of approaching this issue is to realize that a student is basically hiring the school to provide a variety of services: teaching, lodging, and so on. What then is the fair practice when someone leaves one of these agreements in mid-year?

One who hires works and they deceived him, or he deceived them [by reneging right away], they have only resentment against each other [but no claim for recompense]. This refers to a case when they didn't go [to the place of work]. But if the porters went and didn't find grain, if workers went and found the field soaked [and unsuitable for field work], he must give them their full wage. But one who goes loaded up is not the same as one who goes empty; one who works as one who sits idle. (1)

The passage goes on to explain as follows: If the boss or the worker reneges right away, this generally results only in disappointment and a bit of extra effort to find a replacement hire, but no monetary loss. So no recompense is due.

We can easily apply this law to your situation. A student leaves in the middle of the year. Can the school find a replacement with little extra effort? If so, this is the first case: there is disappointment and some elbow grease, but no monetary loss. In this case, the fair policy would be to just have a small fee to cover the extra administrative time and effort involved in finding a replacement.

Often it is impossible in the middle of the year to find a new student. In that case, we have to ask if the school incurred any costs in accepting the student, and if they have any savings by losing him or her. If the school has fixed enrollment and had to turn down another student to accept you, then you are costing them your full share of the overhead, though you still save them a certain share of fixed costs: your share of food, heating etc. In this case you would be entitled to a very small refund, because the school will save a very small fraction of what they spent or sacrificed to accept you in the first place.

If the school has variable enrollment, then the opposite will hold: the school incurred a very small cost in taking you on; almost your entire salary contributed either to overhead or to profit. In this case, you should be entitled to almost the entire sum. Only what you consumed already, or whatever marginal fixed costs were incurred (perhaps some staff are paid per student, or you necessitated an extra teacher for one course etc.) should be demanded.

Furthermore, the school may not want to disclose what its precise admission or readmission polices are. But if there is a standard policy, it should take account the above considerations.

Many schools have a "no-refund" policy even though it is quite unusual that the student who leaves is truly a marginal student and no replacement can be found. Such a policy is not truly a refund policy; rather, it is a fine for leaving. Jewish law frowns on punitive fines. Consider the following Talmudic passage:

A person received land from his fellos [as a sharecropper]. He stipulated: If I leave it fallow, I will give you a thousand zuz [in lieu of the crop you would have received had I worked the land]. . . .Rava said, this is a hypothetical condition, and hypothetical conditions are not valid. How does Rava distinguish this from what we learned: "If I leave it fallow, I will pay you in the best produce" [and the condition is enforced]? In that case he did not exaggerate; in this case since he added an extra amount, it is an exaggeration [and his promise is an extravagant one]. (2)

A fine for improper conduct is acceptable if it is approximately commensurate with the loss caused. In the case of "I will pay you in the best produce" the fine is more perhaps than average, because not every sharecropper, and not every year, results in such a crop; but the fine is still reasonable and commensurate, and thus enforceable. But beyond that is not considered reasonable.

By the same token, it is legitimate for a school to adopt a standard policy that well protects them on the whole from the losses involved when a student leaves in mid-year. But in most cases an unvarying no-refund policy will not be fair.

The Jewish Ethicist - Pay Up!
Olivia Newton John’s Grandfather was a Nobel-Prize Winning Jewish Physicist
Don’t Believe in Other Gods Versus God is One
Seeing Without Eyes
Comments
MOST POPULAR IN Current Issues
Our privacy policy
Aish.com Is Looking for Great Writers