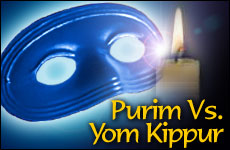 Purim is holier than Yom Kippur? They didn’t teach that in Hebrew school!

The Talmud says that every Shabbat and Jewish holiday is "half spiritual, half physical." We spend part of the day praying in synagogue (the spiritual), and the rest of the day eating a fine meal and relaxing at home (the physical).

True spirituality is not achieved by meditating alone on a mountaintop, or by taking vows of abstinence in a remote monastery. Jewish spirituality comes through grappling with the mundane world in a way that uplifts and elevates. That's why yeshivas are always located near town and the bustle of commercial activity.

Jewish consciousness says: Don’t retreat from life; elevate it. On Friday night, we raise the cup of wine to make Kiddush and sanctify the Sabbath day. Spirituality, says Judaism, is to be found everywhere from the boardroom to the bedroom.

One exception to this rule is Yom Kippur, when both halves are spiritual: We spend our entire day praying in synagogue, with no food, no marital relations, and not even the comfort of leather shoes on our feet.

The second exception is Purim, when both halves are physical: We feast, visit friends, dress up in costumes, and drink to excess.

At first glance, we would assume that Yom Kippur is the greater of the two days. But in one sense, Purim is even greater: It is easier to achieve spiritual elevation on a day like Yom Kippur, when we pray and have no time for forbidden activities like gossip or getting angry. By fasting, the soul achieves dominance over the body.

In this way, the challenge of Purim is greater. That’s why, by comparison, Yom hakiPurim is only "a day like Purim."

According to Jewish thought, the only people to see the world in a state of perfection were Adam and Eve, who lived in the paradise of Eden. Yet they fell from that state by eating from the Tree of Knowledge of Good and Evil. That is, they pursued the world of illusion, where the transcendent universal good is masked by the seeming imperfection of evil.

If we approach Purim correctly – reaching a drunken state of no longer knowing good from evil – we actually realign our perspective by seeing the Transcendent as the source of all physical reality, thereby revealing its hidden perfection. Thus Purim at its peak is a taste of Eden.

The potential for spiritual elevation on Purim is tremendous. As we're drinking and partying, let’s keep this in mind and not let the opportunity fly by.

From Shushan to Jerusalem