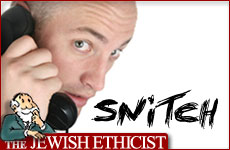 Constructive disclosures need to have constructive intentions as well.

Q. I have a nasty co-worker who is hard to get along with. I'm thinking of putting him in his place by telling the boss about his frequent tardiness, but should I be afraid of being a "snitch"?

A. The Torah warns us to be very careful about disclosing people's failings, commanding us "Don't go about as a talebearer among your people". But it also warns us to be solicitous of other people's well-being, commanding us, "Don't stand idly by the blood of your brother", which can sometimes require telling someone about other people's misconduct. In order to highlight the tension between these two mandates, the Torah places them in a single verse. The message is: don't reveal damaging information unless it is necessary for a constructive purpose, such as protecting someone from harm or loss.

From that point of view, your disclosure could be justified. Chronic tardiness can affect a worker's productivity, and sometimes the employer would deserve to be informed.

However, the rabbis added another, perhaps surprising requirement for permitted disclosure: not only does the information have to be constructive, it has to be transmitted with a constructive intention. The classic work on slander, Chafetz Chaim, describes the requirement as follows:

"That the intention should be constructive . . . and not to benfit, God forbid, from the deficiency that he ascribes to his fellow, nor from enmity that he bears him from beforehand." (1)

Rabbi Yisrael Meir HaCohen, author of Chafetz Chaim, didn't invent this requirement. It is implicit in a number of prominent early authorities. For example, Maimonides writes that when information is already widely known, it is permissible to repeat it, but only on the condition "that he doesn't intend to spread the word and to make it more widely known". (2)

Another very prominent early medieval authority, Rabbenu Yonah of Gerondi, infers this principle from a Talmudic law. The Talmud states that when a person has to spread derogatory information in order to protect himself, for example to inform others that an interloper is squatting on his property, he should publicize the information before three people. One reason is utilitarian: he wants many people to know so that no one will suspect that he condones the possession. But Rabbenu Yonah discloses another reason: so that people will not suspect him of rumor mongering. When a person wants to spread a false rumor to defame someone, typically he does so in a subtle and devious way. In this way it is hard for the victim to trace the source of the rumor and to confront it. We see from this that even giving the appearance of having an ulterior motive is forbidden. (3)

Ultimately, the transgression of slander is an interpersonal one. Just as it is forbidden to harm someone's property, it is forbidden to harm his or her reputation. From this point of view, the requirement for proper intention when the disclosure is ultimately justified is puzzling. There are a few, complementary explanations for this requirement.

One explanation is that if we allow people to do the right thing for the wrong reason, they will easily find any excuse or pretext to slander someone they dislike. There is always some imagined benefit to society to disclosing wrongdoing, what is today known as "the public's right to know". So we require that the disclosure stem from the proper motives.

Another way of looking at this is to recall that the Torah regulates not only interpersonal relations but also our character development. Specifically seeking to defame our fellow man is a contemptible character trait. This aspect is emphasized by Rabbenu Yonah himself in a separate book he wrote on character development: "One who slanders involves himself in two evils: the damage and shame he causes to his fellow, and his own choice to condemn his fellow and to rejoice in his misfortune". (4)

Given that your motive for "snitching" on your coworker is vindictive and not constructive, this is a bad opportunity to report on him. If you yourself are often late, then there is an additional problem: Rabbenu Yonah points out that when you condemn someone else for something you yourself are guilty of, you appear as a slander and a hypocrite. (5)

The Jewish Ethicist: "I Quit!"