From Shushan to Jerusalem 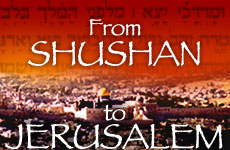 Purim is the time of sudden reversal, a time to prepare for the rebuilding of eternal Jerusalem.

Purim is the time for light, funny, humorous pieces. Current events, intrigues, alliances, power politics, war, death, terrorist attacks or accidents do not seem appropriate. Nor does it seem the time to write about fear, hatred or financial dealings; social problems, domestic difficulties or complicated personal affairs. Even though the story of Purim is replete with these themes.

But like it or not, as Purim 5763/2003 approaches, we find ourselves waiting once again to see how the current Persian-Babylonian-Iraqi scenario develops. Although one usually thinks of Purim in connection with enemies like Amalek or Haman (or Saddam Hussein!), this year my heart resonates with the Jerusalem Connection. For the theme of Jerusalem runs -- k'chut hashani -– like a scarlet thread through the story of Purim.

One crisp, cold night last week, when the air was clean and clear after several days of heavy rain, we were driving to the city's main mall. In typical Jerusalem fashion, the road suddenly rose steeply along the contour of the mountain (nothing in Jerusalem is flat for very long) and as we ascended, the city, in all its glory, suddenly appeared, spread out before us in a majestic arc. Millions of lights twinkled in a wide semi-circle, stretching from Nebi Samuel (Shemuel Hanavi's burial site) in the north to Bethlehem in the south. It was as though the heavens had opened up and rained stars down onto the earth.

Taken by surprise, I caught my breath and my eyes blurred. "How beautiful you are," I thought. "Klilat yofi -– masos k'chol ha'aretz. Filled with beauty; a source of joy to the world." [Lamentations 2, 15]

This was not Jeremiah's city of destruction, not a city in mourning. It was the city of the Zechariah filled with people and light. An open, free, unwalled, sovereign City of God with half a million residents; a city which the prophet said would one day reach all the way to Damascus. Here was the crown of the Judean hills and the Land of Israel. True, it was not yet complete, this vision of Jerusalem. The Temple Mount is still empty; the crown jewel still missing. But in due time, that too will come. And what better time than Purim to hope and wait and prepare.

This is the season when the unexpected becomes reality.

For Purim is the time of Venahafoch Hu, of sudden reversal, when the world turns in dizzying circles and nothing is what it seems. This is the season when the unexpected becomes reality. Even Jerusalem is "disguised." But our contemporary costumes will turn into Bigdey Kehuna -– the clothes of the High Priest. And Har Habayit –- the Temple Mount -- will shed it's foreign structures. A new Beit Hamikdash, Temple, will rise up as a beacon of light for the Jewish people and the world. The empty places in the Land of Israel will once again be filled with Jews and the glories of ancient Shushan will fade into oblivion before the glory of the future Jerusalem.

The Sages said that Achashverosh's festivities came to mark the end of an era. He reckoned (mistakenly) that the 70 years of exile were over, yet the Jews had not been redeemed. This "proved" the prophecies wrong. To celebrate and display his now (so he thought) secure, unchallenged power, he used the vessels from the Temple at his parties and wore the clothing of the High Priest.

But his calculations and machinations were for naught. On the 14th of Adar all was overturned, and in Shushan, on the 15th, the final seal of Jewish salvation was apparent to all. On the 15th of the month, when the light of the moon is full and Jewish potential is at its greatest, there was Light and Joy for the Jews of Shushan and across the Kingdom.

And on this day the Sages honored not only Shushan, where the miracle actually took place, but Eretz Yisrael and Jerusalem. Even though at that time, Shushan was the capital of a great kingdom and Jerusalem was but a small, half-empty, half-destroyed, wall-less city on the periphery of Achashverosh's great empire, the Sages declared that walled cities in Eretz Yisrael from the time of Joshua were to celebrate Purim on the 15th of Adar.

Walled cities in Eretz Yisrael? From the time of Joshua? What's the connection to Purim??

Because while commemorating the miracle of their salvation, it was deemed necessary to emphasize the permanence and place of honor due Jerusalem and Eretz Yisrael, even in the midst of their destruction. The emminence and grandeur of other nations is transitory; the strength and splendor of Eretz Yisrael is everlasting. And so today, "Shushan Purim" means the 15th of Adar, the day Purim is celebrated in Jerusalem!

But even walls are subject to the Purim law of venahafoch hu, sudden reversal. In the future, the most famed walled city of all -- Jerusalem -- shall forgo its wall and become an ir prazot -– an "open" city!

Yerushalayim shall be inhabited as an unwalled city because of the multitude ... who reside within her. And I shall be for her, says God, a wall of fire around her, and I shall be the glory inside her.....Sing and rejoice Daughter of Zion, for I come and I shall dwell in your midst, says Hashem. [Zechariah, 2: 8-9 & 14]

And this shall be the greatest "Venahafoch hu" of all. Purim Sameach!