Perseverance: The Gateway to Holiness 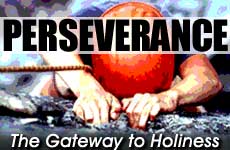 Perseverance, the bedrock of Jewish tradition, is the key to spiritual success.

The annals of inspiration are replete with tales of perseverance:

Abraham Lincoln is widely regarded as the greatest president in American history; yet his career was full of defeat and humiliation. Born into backwoods poverty, he was forced to earn a living at an early age. He twice failed in business, and suffered a nervous breakdown. He was the loser of eight elections for state and national office. He suffered ridicule for his unusually tall, ungainly appearance. During his tenure in the White House, he was villified by newpapers and politicians across the political spectrum, including members of his own party and cabinet.

The electric light bulb, the phonograph and the radio vaccum tube, are only the best known of Thomas Alva Edison's thousands of inventions. But it didn't come easy. Edison was endowed with a capacity to persevere almost as remarkable as his scientific ingenuity. His first phonograph couldn't reproduce the "sh" sound -- it couldn't say "sugar." It took Edison two years of relentless toil before he finally managed to correct the defect.

Colonel Sanders did not become a household name overnight. He peddled his secret formula for Kentucky Fried Chicken to 1,009 different customers before somebody finally saw enough potential in his recipe to agree to give him a share in the profits (his franchise idea). Only then did the rest become finger-lickin' history.

In 1993, National Geographic photographers, some of the best in the business, shot 46,769 rolls of film, about 1,683,600 frames. That year, 1,408 pictures were published. A batting average of .001. “People are always asking me about the f-stop and shutter speed of my pictures,” says natural history photographer Frans Lanting. “I tell them: ‘The exposure for that photograph was 43 years…and one-thirtieth of a second.’”

The Gateway to Holiness

In all of these examples, the rewards -- whether in the realm of politics, science, business, photojournalism -- are of a material nature. It is a common misconception that when it comes to spirituality, however, some people are just more religious by nature. But the truth is that perseverance is the key to spiritual success, too. Indeed, it is the gateway to holiness.

The Patriarchs -- Abraham, Isaac and Jacob -- would never have succeeded in founding monotheism and the Jewish people had it not been for their extraordinary perseverance. Tradition records that Abraham withstood ten major trials: twice he suffered exile; twice his wife Sarah was abducted; the binding of Isaac; the sending away of his son Ishmael; the war with the four kings; the prophetic vision of his descendants' enslavement and exile; Nimrod's attempt to murder him; and the danger of undergoing circumcision at an advanced age.

Likewise, his son Isaac suffered persecutions at the hands of the Philistines; underwent the trial of being bound as a human sacrifice (called off only at the last moment); separation from his beloved son Jacob for 36 years while his other son, Esau tried to kill him.

Jacob, too, endured a life of physical and emotional hardship. He was persecuted by his brother; swindled by his father-in-law; his only daughter, Dinah, was raped; and for 22 years he mourned over his favorite son, Joseph, thinking he was dead (he had been sold into slavery in Egypt).

These were trials that would have broken the spirit of most people. But our ancestors never gave up. On the contrary, they understood that all of their troubles were heaven sent, and that they were designed to strengthen them. In the end they achieved their world-changing goals of founding the Jewish people and spreading the great monotheistic idea.

Why is it that perseverance is so rewarded? In secular affairs, perhaps, we can understand it more easily. Society tends to resist new ideas, so it is necessary to persevere, putting the new idea before the public over and over again, until that initial resistance is broken down. In science, it is often a matter of trial and error, and many experiments are needed before the right method is hit upon. In art and politics, it may be a matter of gaining experience and perfecting one's technique -- things that don't happen overnight.

Belief is a process, and the end-product of that process is one's own more spiritual self.

But in matters such as prayer and belief in God, either you believe or you don't. Why should perseverance be a factor?

Faith Is A Mistranslation

The word "faith" is an English word. In Hebrew, however, the word it is usually meant to represent is "emunah." The root of the word "emunah" is "umanut," which means craft. That is because in Jewish thought belief in God is like a craft -- a skill or set of techniques that are studied and perfected over time. It's not something that you're either born with or not, like a beautiful voice or a great fastball. Whether one is born and raised in a religious environment, or is seeking God from far away, belief is a process, and the end-product of that process, that craft, is one's own more spiritual self.

The skills of belief are developed and honed in everyday Judaism. For example, in Shema Yisrael, the central affirmation of faith, we twice daily declare the Torah's own formula for coming close to God:

How are we to reach such a lofty level of attachment to the Almighty? How is a finite being, immersed in the aspirations and woes of the human condition, to reach so close to the Infinite? The answer lies in the next line:

"And these words shall be on your heart..."

The classic commentators say that the words of faith should be a subject of continuing meditation, as if they were written on one's heart for constant reference and review. Rabbi Yitzchak Hutner noted that it says "on your heart," rather than "in your heart." These lofty ideas often do not penetrate right away; but in the course of time, if one continues to say them, ponder them and keep them on your heart, the right moment will come, and they will make their way into one's heart.

And you don't have to be a certified patriarch to get somewhere in the realm of spirituality. The prayers and deeds of ordinary people can reach the highest places; all it requires is sincere and persistent effort. The great Hasidic master, the Kotzker Rebbe, was once approached by one of his followers, who complained that, despite his best efforts, he was unable to summon the appropriate feeling to go with his prayers. The rebbe told him not to worry: the prayers are never wasted. God stores them away until a prayer is finally uttered with the proper feeling, and that carries the others up with it all the way to the Heavenly Throne.

The Secret of Perseverance

Perseverance is anchored in hope; and hope is rooted in the belief that things will get better. This is essentially a religious belief, since there is no reason, logically speaking, why things should not continue to get worse. We refer you to today's headlines.

Perseverance demonstrates an underlying hope, an inner belief that God is good and He rules the world.

That is the secret of perseverance. It demonstrates an underlying hope, an inner belief that God is good and He rules the world. Therefore, ultimately things must turn out for the best.

Perseverance has been a built-in feature in Jewish tradition. The prayers for both private and communal needs -- for health and knowledge, for the re-building of Jerusalem and the ingathering of the exiles -- have been offered on a daily basis for over two millennia.

The history of the Jewish people itself is a record of awesome perseverance, the nation never giving up on its divine mission despite two thousand years of exile and persecution. Today, we are witness to some of the fruits of that attitude of the undefeated. Whatever our troubles, the return of the Jewish people to our homeland, once thought to be an impossibility, has become an astonishing reality. To bring that return to its full climax, to a national restoration in peace and harmony, will require yet additional measures of perseverance. We shall not fail.

Impart Serenity to Others

The Lens of Self-Confidence
For Every Individual, A Torah Scroll
Allegiance To The Monarch
Meet the Real You: Yom Kippur
Comments
MOST POPULAR IN Uncategorized
Our privacy policy
Aish.com Is Looking for Great Writers