Have You Found Your Soul-Mate? 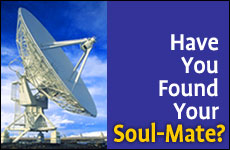 Know when to say "I do." Then the real work begins.

A story in the Talmud says that centuries ago, when a young man would get married, people would ask him a curious question: "Have you found, or are you finding?"

The questioner would then quote a verse, depending on the groom's answer. If the groom says that he "found," they'd quote the verse: "One who found a wife has found good" (Proverbs 18:22).

If, however, he answers that he is "finding," they quote the verse: "I am finding something more bitter then death: a wife" (Ecclesiastes 7:26).

The attitude for a great marriage is displayed by the groom who answers, "I found." He is saying that he is fully committed to this woman as the one for him. He is no longer going to be checking out to see if he has possibly made a mistake.

He understands that with all the future hardships and broken fantasies, with all the personality flaws and shattered dreams, with all the arguing and tears that will be shed, even with all these things, she is the one for him. They are going to persevere and work through all their issues and create the relationship that they both deserve.

A husband who has "found" his wife, and constantly makes her feel that she is the only one for him, "has found good."

A woman needs to trust that her husband will be there for her, no matter what.

On the other hand, the husband who is constantly "finding" -- i.e. still checking out to see if he has made the right decision, makes his wife feel judged and never really gives her a sense of security in the relationship. If she can't trust him that he will be there for her no matter what, then the situation will feel to him "more bitter than death."

Most people believe that a good marriage is a "happening." If you marry the right person, you will have a great relationship. This is not true. Marriage is a skill. You need to work on these strategies daily. Small gestures and cosmic connections all add up to the sum total of your marriage. How you make your spouse feel today is what great marriages are made up of.

The lesson: You have to constantly treat your spouse as if they are your soul-mate. The truth is that you will never really know anyway, until you have been married for a long, long time.

When I've said this to single people, they usually stop me, give a double take and declare: "Are you saying that you cannot know before marriage whether the person is your soul-mate?!"

That is correct. You cannot really know. You hardly know the person. Even if you have been dating for years, the nature of the relationship is such that without the sense of security that a lifetime commitment brings, you will never show all your cards. People are always shocked that after marriage, everything changes. It is as if you have married a different person.

It takes time to build the confidence necessary to show the real you, to let your spouse in deeper and deeper, as you peel away the layers of fear, anxiety and pain caused by past broken trusts.

After years of growing closer and closer, treating your spouse as a precious and intimate part of yourself, you will inevitably become soul-mates.

Of course, marrying the right person can make this process easier. But then again, there are multitudes of "soul-mates" in divorce court.

So if you cannot know whether the person is indeed your soul-mate, how should you make the decision who to marry?

I have asked thousands of single people why they are not married. They nearly all give the same answer: "I haven't met the right person."

So I ask: "How will you know when you've met the right person?"

They answer: "I'll just know." Just know? Will there be a moment of intense clarity from deep within you... an inner-voice... an epiphany? Or perhaps butterflies in the stomach, fireworks in the sky, and the sound of bells chiming in your head?

If you don't know how to find a spouse, it's like buying a lottery ticket as a wealth strategy.

I know of a few couples who have discovered their spouse in this way. But if this is your primary strategy for finding your better half, it is sort of like buying a lottery ticket as a wealth strategy. Possible, but very highly improbable.

The story of how Adam and Eve met is a wonderful lesson on how to find a spouse. Adam was by himself, and God said that it is not good for man to be alone; therefore, He would make for him a woman.

But before the Torah tells how Eve was created, it goes off on a really strange tangent. It tells of how God brought all the animals to Adam for him to name them.

After he completes this task, Adam declares that he has still not found his wife. Well, what did he expect?! You think your dating world is tough -- look at the zoo that Adam had to go through! Picture the scene: God brings an elephant in front of Adam and asks, "What do you think of this one?" Adam, not wanting to hurt the elephant's feelings says, "Well, she has nice ears... but I just don't think she's for me." He then names the elephant and God brings the next animal: "How about this one?"

What's going on here? Did God really think that Adam was going to find a wife this way?!

The answer is that naming the animals is the prerequisite for Adam to get married. A name describes the essence of a being. As Adam peered into the nature of each animal, and searched for the trait that best encapsulated its essence, he first had to identify that trait in himself. If he did not have it within, he would never have recognized it in the animal.

Naming the animals was a process of self-discovery for Adam. Only after he had understood who he really was, could he then recognize what he was lacking, and appreciate that he was truly alone.

God then immediately created Eve, and Adam declared that she was "the flesh of my flesh, and the bones of my bones." Adam had stopped trying to "find" a soul-mate, and was now certain that he had "found."

The most important prerequisite to get clarity if you should marry a person (or not), is to know yourself first. If you don't have a clear sense of who you are and where you are going, if you don't have clear life goals and a thought-out path in life, you can never expect to recognize if the person in front of you is the one you should marry.

In other words, if you think that you're not married yet because you haven't met the right person, you are probably right. The person you have yet to meet is yourself.

Know yourself, and you will have a much easier time recognizing your future spouse.

And then, when you get married, if you treat your spouse as your soul-mate, you will create it to be so.

Aryeh Pamensky is the Director of The Pamensky Relationship Institute and the founder of HappyWife.com inc., which is dedicated to provide couples with strategies for creating extraordinary marriages. The subsequent spin-off lectures ("Pamensky Live", "Pamensky Returns", and "Dating for Fun, Dating for Marriage") and workshops ("Conflict Resolution" and "Making Love Real") have propelled Aryeh into a highly sought-after speaker. Pamensky has been coaching couples for 9 years, tailoring personalized curriculum for marital excellence. Pamensky studied in Israel for a decade, was ordained as an orthodox Rabbi by the Chief Rabbi Of Jerusalem. He and his wife Yocheved have seven children, ranging in age from 2-14, and presently reside in Toronto.

The Courage to be Vulnerable: A Key to Intimacy

Can a Video Game Ruin a Marriage?

7 Common Mindsets to Discard before Marriage

Marriage: For Women Only
The Softball Player
How This 6 Generation Bread Baker Brought Back Israel’s Ancient Grains
Olivia Newton John’s Grandfather was a Nobel-Prize Winning Jewish Physicist
Comments
MOST POPULAR IN Family
Our privacy policy
Aish.com Is Looking for Great Writers