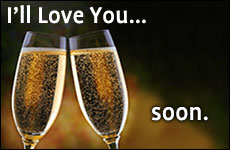 The love between husband and wife is not automatic. Building a great marriage requires effort.

From a post-modern perspective, Judaism promotes two aspects of marriage that are rather striking.

First, Judaism says that marriage precedes true love. Second, Judaism promotes and celebrates differences within marriage. Let's take them one at a time.

The Torah says that Isaac married Rebecca, built a home with her and then he loved her (Genesis 24:67). Now from our perspective here in the 21st century this sounds a bit strange. We are used to the romantic ideal of falling in love and then marrying as a result, not the other way around.

The key to understanding the Jewish perspective lies in the definition of love. Romanticism holds that love is an event, an occurrence. We fall into it. It trips us and then we're caught in it and its consequences. Cupid shoots us and then it takes on a life of its own.

Judaism rejects this definition outright. We say that love is something we choose to do, not something that occurs to us. Judaism says that the correct term for that romantic ideal of love is really infatuation, not love. Infatuation is easy come and easy go. One of Webster's definitions of romance is "an exaggeration or fabrication that has no real substance." What we're striving for instead is substantive, lasting love.

After 20 years of togetherness, I have created my soulmate.

Judaism defines love as the emotion a person experiences by identifying with the positive qualities in another human being. To take an extreme example, the mother of an axe murderer is interviewed and proclaims for all the world that her son is a good boy who always made his bed. As a mother she naturally identifies with the positive qualities in her child. She loves him.

In marriage, while we of course don't advocate living in denial, we do expect each spouse to identify with the positive attributes of the other. But it's not natural like parenthood, so we have to work at it instead.

I don't marry a soulmate. I marry a good person with integrity and with goals and expectations consistent with my own. After 20 years of togetherness, raising a family, accentuating the positive and meeting the challenges, then, I have created my soulmate.

I Love You; Don't Change.

Now to the second aspect. Marriage is about creating a oneness and a commitment to oneness. Paradoxically, the oneness is achieved by recognizing and maintaining differences.

The Talmud explains that the first human being was created by God both male and female, and only later was there a division into two genders. In marriage we re-connect with our other, missing, half. My spouse is as much a part of me and my self-perception as any other part of me. My spouse's needs are no more a burden to me than my own. It's not me and her -- it's us.

Opposites can create a more binding and lasting oneness.

Now given the vast differences between men and women -- physical, emotional, Mars and Venus -- how can we expect this oneness to be achieved? Here we come to the heart of the matter. Judaism maintains that an appropriate reaction and orientation to precisely these profound differences, to the very polarity between the genders, can and should generate and accentuate oneness. By each spouse having concern for the other, by focusing on the needs of another, 24/7, by becoming mature (i.e. by being other-oriented rather than self-oriented), by extending themselves for each other, they become integrated and one. In this sense, opposites can create a more binding and lasting oneness.

We strive for shalom, peace, in the home. Shalom does not mean the absence of possibility of conflict; it means a positive state of harmony achieved by each side completely understanding and identifying with the other. I marry someone who shares my goals, yet whose make-up and wiring is different than my own. This is the path to oneness.

Being other-oriented makes for terrific individuals, not just great marriages. Judaism wants us to develop into extraordinary people of greatness and vision. An important path to this development is getting married … and working to make it a great marriage.

Confessions of a Serial Hook-Up Artist

50 Things to Know about Being a Matchmaker

The Joys of Being Single
The Softball Player
How This 6 Generation Bread Baker Brought Back Israel’s Ancient Grains
Olivia Newton John’s Grandfather was a Nobel-Prize Winning Jewish Physicist
Comments
MOST POPULAR IN Dating
Our privacy policy
Aish.com Is Looking for Great Writers