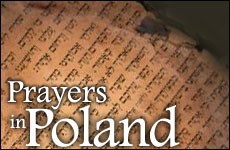 In the fall of 1942, a young hidden Jew receives a private small miracle.

David Seitelbach's bright blue eyes and light blond hair became his
passport to survival during the war. At the tender age of 13, he
was forced to leave his hometown of Galicia in the south of Poland,
near the Russian-Ukraine border. His town had been turned into ghetto by the Germans. His father, mother, sister, and uncles were bound for the concentration camps where, unbeknownst to David, they would all be exterminated.

David, however, roamed free. His "Aryan" coloring allowed him to blend into the Polish landscape. The young boy wandered aimlessly throughout the war, working as a farmer's helper whenever and wherever he could, all the while feverishly trying to hide his Jewishness. Any slight hint of exposure meant certain death.

During one "Thanksgiving" dinner at a Polish farm where he had secured temporary employment, David was invited to join the family and partake in the meal. While everyone else enjoyed the ham set in the center of the table, garnished with herbs, David ate only vegetables, remembering his family's clear admonishment against eating ham -- the quintessential un-kosher food. Not wanting to rouse any suspicions, he simply said that he wasn't too hungry when he was asked if he'd like some more food.

"I wish I had a Jewish calendar. Who knows? Maybe today is Rosh Hashana or Yom Kippur."

It was the fall of 1942 and David worked unceasingly, tending the land with horse-drawn plows. As he fed the cows, minded the chickens, and brought in the harvest from the fields, he took special note of the season: The green leaves on the trees were turning into a rich kaleidoscope of color; the air was growing colder; the sun set earlier and rose later. It was the time of year that David had learned to associate with the Jewish High Holidays. He vividly recalled going to the synagogue with his father, mother, and sister where they beseeched God to bless them with a good year ahead.

David thought yearningly of the solemn High Holiday prayers. Despite the brutality of the war and his own tender years, David clung to his faith, and longed to give expression to it in some small way. But while grown men probably knew the prayers by heart, he was too young to have had the opportunity to memorize them.

"I wish I had a Jewish calendar," he reflected one day. "Who knows? Maybe today is Rosh Hashana, the New Year…or maybe it's Yom Kippur, the Day of Atonement. It should be somewhere around now. How sad it is that I don't know and don't have anyone to ask. If only I knew the exact words of the prayers so I could say them anyway, and just hope it was the right day…"

David was thrust out of his reverie when the farmer, his boss, asked him to go to the market to fetch some goods. David traveled by horse and buggy, and once he'd arrived, he hitched the horse to an adjacent tree and went inside to buy the goods requested by the farmer.

"Please give me half a pound of salt, one pound of sugar…and…"

David's voice began to falter as he watched the grocer package his items. Although he knew that the war had created a huge paper shortage in Poland, he could not have imagined what was being used as its substitute. David watched, horrified, as the grocer casually reached for a volume of Jewish Holy Scriptures that lay on a nearby shelf and ripped out a few pages to create some paper cones into which he poured the salt and sugar. While many supplies were scarce, Jewish holy books were plentiful since the synagogues, Jewish schoolhouses, and Jewish homes had all been laid to waste and looted by the Nazis and the Poles. Clever uses were devised for all Jewish property. What better way to wrap grocery goods than with
the holy pages of the Jewish scripture?

David felt as if he had been punched in the stomach. The violation of the sacred book was almost too much to bear. Not wanting to show his dismay for fear of revealing his identity as a hidden Jew, David kept his voice steady and his face stoic even as his innards churned. "And please," he continued, "some yeast."

David paid the sum and, with hands shaking, placed the packages under his arm and exited the store.

David opened the packages to see exactly which holy text was being used in this sacrilegious way.

Once outside and back in the buggy, away from the store and anyone's view, David opened the packages to see exactly which holy text was being used in this sacrilegious way. He took the cone of yeast in his hand and gingerly untied the string. With loving care he beheld the sacred Jewish pages in his hands, and then began to read the words that lay therein. He trembled with excitement as he realized that the storekeeper had randomly wrapped his packages with pages torn from the High Holidays prayer book.

Let us tell how utterly holy this day is and how awe-inspiring… The great shofar is sounded . . . a gentle whisper is heard… On Rosh Hashana their destiny is inscribed and on Yom Kippur it is sealed.

These words were considered to be among the most powerful prayers of the High Holidays. David read each word as if for the first time. As he prayed, he recalled the holidays of a better time, when all the congregants in the synagogue had stood erect while chanting these holy words.

Who shall live and who shall die… Who shall come to a timely end, and who to an untimely end…who shall perish by fire and who by water…who by hunger and who by thirst…

For David, these words were real. At his tender age, he had already witnessed "untimely" deaths, had already experienced the ravages of hunger and thirst. So many of the people he knew and loved had "perished by fire" (the furnaces) and "water" (the showers that spurted gas instead)

David knew it was the fall season. He knew the holidays were around this time; he had wanted to observe them in some meaningful way. He was too young to know the prayers by heart but yet he wanted to access the prayers that would lift him up from his dismal surroundings and propel him to a higher plane. Now these same prayers had miraculously appeared in his hands, and David knew without a shadow of a doubt that his question about whether it was, in fact, the High Holidays had been answered. He knew that this was his personal miracle.

David raised the torn, violated, sacred pages of the machzor before him, and with his pure sweet voice he prayed on.

Postscript: David is now 87 years old and lives in Toronto. Though his life's path has taken him on a circuitous journey and he's had his share of trials and tribulations, he still reflects back on that day in Poland a long time ago when those powerful words appeared
and brought solace and deep comfort to his aching soul. They still do today.

Excerpted from "Small Miracles of the Holocaust: Extraordinary Coincidences of Faith, Hope and Survival" by Yitta Halberstam and Judith Leventhal, Globe Pequot Press. Click here to order.
Like What You Read?  Give Jews around the world the chance to experience engaging Jewish wisdom with more articles and videos on Aish. It would make your mother so proud and as a nonprofit organization it's your support that keeps us going. Thanks a ton!

Jews and the Irish Potato Famine

From Holocaust to Revival: Fulfilling the Promise