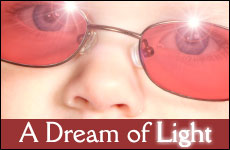 For some people lighting the Chanukah candles is an unattainable yearning.

Chanukah. My husband Aaron has finished lighting his menorah, and now it's Ayelet's turn. I gaze another moment at the steady oil flames in the tall silver menorah before turning to look at Ayelet's kindergarten-made ceramic menorah, gaily prepared with candles of all different colors. She had very proudly placed it on the windowsill the moment she brought it home a few days ago. Yehuda's three-shekel tin menorah sits on the windowsill as well, waiting its turn.

Ayelet is ready, looking adorable and neat as ever. (I invariably hesitate before throwing Ayelet's clothes into the hamper each evening; they look barely worn.) Her pink striped turtleneck is tucked neatly into a three-tiered denim skirt, the shoelaces of her Nike sneakers are tied in the same bow since the morning, her dirty-blond bangs are pulled back from her face with a small fuzzy ponytail holder. The round pink glasses perched on her nose complete the picture.

Aaron hands Ayelet a lit candle as we all watch. At nearly four years old, she should be able to light the candles on her own.

The candle is in Ayelet's hand which is stretched forward toward her menorah, but she turns her head to the side. She is not looking at the lit candle, nor at the candles she is supposed to light. In the glare of Aaron's already lit menorah, her hand doesn't move. Ayelet, just light the candles, I silently will her. But she won't. I know she won't. The moment I saw her turn her head away, I knew with a sinking heart that she wouldn't.

Aaron takes her hand and brings it close to the first candle, the second, the third. "Hurray, Ayelet," he says cheerfully. "You lit the whole menorah, what a wonderful job!" Ayelet once again tries to look at the menorah, to see her accomplishment in the colorful lit candles. Once again, she turns away as soon as her gaze hits the flames.

Aaron is lighting the menorah with Yehuda now. At just two years old, he is too young to hold the candle on his own. Aaron holds the candle with him as Yehuda quickly lights the candles -- one, two, three -- his long white-blond hair bouncing with excitement.

I clap along to show I'm there, taking part in the action. No one can see how far away I really am.

There is no break in momentum, there hasn't been all along. Everything is cheerful. Aaron is dancing with Ayelet and Yehuda to the tune of Maoz Zur. Ayelet and Yehuda want to hold hands with Aaron, but Ayelet won't hold Yehuda's hand. Yehuda is a little upset but gets over it, now Ayelet agrees to hold his hand but he's no longer interested.

I watch everything, I clap along to show I'm there, taking part in the action. No one can see how far away I really am.

How can I have been so dumb, so blind, I berate myself inwardly. If years of participating in Ayelet's therapy have taught me anything, I should know that if Ayelet's not doing something, it's because she can't, for some reason or another. I should know that Ayelet's motivation is stronger than mine, that she never settles for the easy way out, that she doesn't give up hope even when deep inside I wonder if she ever will master the feat at hand.

Ayelet perpetually looks at the floor. We know that the light bothers her; she seems to be very sensitive to light. But hey, this is planet Earth, Ayelet, you're gonna have to learn. We bought tinted glasses for Ayelet. They turn into sunglasses in the sunlight, but they don't seem to help much. Ayelet's therapists try to teach her to look up by having her color on a blackboard or easel instead of on a table in front of her. She's fine with this, they tell us. She lifts her head when she needs to.

Not outside, of course. Outside in the sunlight, Ayelet doesn't look up even when asked to. But she'll get over it eventually. She'll learn that she has to or she'll always be lagging behind and bumping into trees and falling. She'll have to learn, I've told myself repeatedly.

We never received any medical diagnosis regarding Ayelet's sensitivity to light. Any questions we asked were brushed off. "Well, we know Ayelet's eyes are not perfect," her ophthalmologist said. His tone portrayed some impatience: Why do you expect any better, why bother asking questions? Time will tell.

When Ayelet was born nearly four months prematurely and weighing just over a pound, that's all the doctors were able to tell us: Time will tell. By the time she hit her three-month birthday, we were old-timers in the NICU. The danger had passed and we were just waiting for Ayelet to grow some more. Then during a routine eye checkup she was diagnosed with Retinopathy of Prematurity. Laser surgery failed to correct it.

Aaron once told me that he hated sunlight as a kid; it bothered his eyes. And one of Ayelet's therapists suggested that her sensitivity was due to Ayelet's fair coloring -- light hair, light eyes, light skin. So I thought, hoped, that it was nothing, that Ayelet would outgrow it. I brushed it off, as everyone else did. And I was impatient with Ayelet when she wouldn't look up.

And now for the first time, I am seeing beyond my own hopes, and seeing reality. I realize that this is a real problem, not a figment of imagination that will recede and then disappear if I ignore it well enough.

Several weeks after Chanukah, a friend tells me of her cousin's young child who had a visual problem related to light sensitivity. My friend doesn't know all the details, but she encourages me to give her cousin a call. It can't hurt, I tell myself, though I doubt the problems are identical.

When I finally get through, my friend's cousin describes a child whose sensitivity to light surpassed even Ayelet's. Her child received some kind of special lens, and can now see perfectly. It sounds too good to be true and I'm skeptical to begin with, but the more I hear what she has to say, the more I begin to hope. She, too, was at the brink of despair. She, too, did not receive any hope or medical leads from doctors. She did all the research on her own, and somehow stumbled across a pair of doctors who were able to help by implanting a special lens they had developed. The whole procedure was really quick; it could barely be called a surgery. And her child now sees and functions as if the problem never were.

There is no time to waste, not even a second, now that the cure is within reach.

I am barely able to contain my excitement as I relate the conversation to Aaron. Aaron hits the phones immediately and actually gets through to one of the doctors. The doctor tells Aaron to email him all our information and he will get back to us. A short conversation, but something tangible. The doctor is real, he talks on the phone, he knew what we were talking about and might have a solution. We compose a letter with a sense of urgency. There is no time to waste, not even a second, now that the cure is within reach.

In my dream, we've flown off to Boston, and are coming back with new eyes. We walk off the plane, Aaron and Ayelet and I. Ayelet's small hand is in mine, her head is erect, she stands straight and looks taller than ever. She looks up at the sunset, and at the surrounding trees, and at the people all around us. "See how beautiful" she says in a sparkling voice. Her excitement is palpable, she is so happy. And Aaron and I are happy, too, and proud...

We barely have to wait for an answer -- the email response is short and to the point. This cutting-edge lens can only cure light sensitivity stemming from disease of the cornea. If the problem stems from the retina, there's nothing the doctor can do.

...And there are tears on my cheeks, rivers gushing from deep within, from much deeper than my eyes, and they are not tears of joy. Because for now, for a while longer, for an unknown length of time longer, my dream is to remain just that, a dream.

About a year later, we finally find a doctor who acknowledges the problem. "Yes," he says, "light sensitivity is a common problem among ROP patients. There's not much to do about it but it usually improves with time." I can't fathom why no other doctor was able to give me this seemingly simple piece of information, but I am grateful to hear it now. And I've already noticed some improvement in Ayelet's outdoor functioning; with her sunglasses and sunhat she can usually walk along the sidewalk on her own without bumping into people and trees.

And on Chanukah two years later, Ayelet stands on a chair, holding the long colored candle on her own. She recites the blessings -- all three of them on the first night -- by heart. And though she hesitates a moment, though her teary eyes show that it still takes concerted effort, she lights all the candles on her own.

Shoshana Horowitz lives in Jerusalem with her husband and four children. She has written a number of articles about her experiences raising her premature daughter.

A Letter to the Three Mothers

Cherishing Your Past
Vayelech 5783: Regret and Repent
Rabbi Sacks: Focus On the Important, Not the Urgent
Put Your Foot Down: Are Human Feet Poorly Designed?
Comments
MOST POPULAR IN Family
Our privacy policy
Aish.com Is Looking for Great Writers