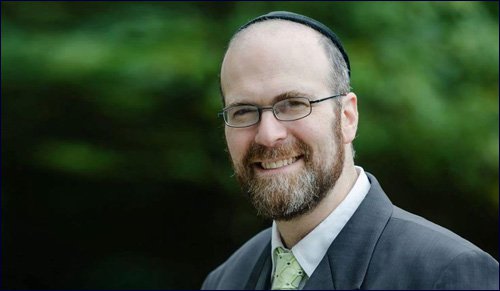 For Dovid Winiarz, life was an outpouring of love and joy. His loss leaves a gaping hole in American Jewry.

Earlier this week, Dovid Winiarz was travelling in a treacherous ice storm near Baltimore, when the car hit a patch of black ice and skidded out of control. Four other people in the two-car collision suffered minor injuries; Dovid was killed instantly.

His loss leaves a bereft wife and 10 children, and a gaping hole in American Jewry.

Though he provided financial services by profession, Dovid's every waking moment was focused on bringing more joy into the world and spreading a positive Jewish message.

On the commuter train, he would walk up and down the aisles, passing out hundreds of cards that said: “Keep Smiling." He'd give everyone two cards, saying: "Here’s a smile for you, and one to give someone else.”

As a young man, he founded a successful food pantry in Staten Island, as well as the organization Survival Through Education which connects unaffiliated Jews to their heritage.

Dovid had a boundless love of people, and a deep love of Torah.

"There comes a time when we stop and ask ourselves just why we come to work each day," Dovid wrote. "If you want to love your work, you need to focus on the giving that results from it. Not what you take for yourself but what you give to others. Tomorrow, when you go to work, do not focus on the 90 percent of your income that you need to pay the bills. Instead focus on increasing your productivity so you will have more to give away."

We come into this world with a mission, and at the end, the only question is have we fulfilled it.

Travelling on that icy highway, he was en route to an annual Jewish educators' convention, seeking new ways to inspire others.

He was totally dedicated to promoting Judaism, always looking to take it to the next level.

He was a dedicated husband and father of 10. A pillar of the community, with an impeccable reputation.

He lived and breathed the idea that every Jew has infinite precious value.

He displayed a generous outpouring of love that helped others see a God who loves every human being.

His bountiful enthusiasm and warm disposition endeared him to untold thousands.

As for the success of his endeavors, Dovid would say, “Wherever I go, I am going to plant seeds. Hopefully they’ll grow one day. It’s not my job to decide if they grow or not... I just have to plant seeds.”

One can easily imagine someone on that train whose life was changed as a result of the "Keep Smiling" card.

These and other untold stories are written and sealed in the chronicles of Dovid Winiarz, for all eternity. May his memory be for a blessing.

Anti-Israel Bias in Academia on Campus

Hope in Hell
What Makes Eli Run?
The Tyranny of Materialism
Science Enters the Mysterious Inner World of Consciousness
Comments
MOST POPULAR IN Israel
Our privacy policy