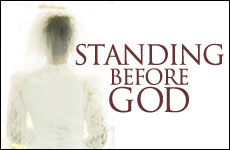 Having just turned 43, never married, no kids, I was having a tough time getting up the enthusiasm to pray for these same things once again

Two years ago, I approached the High Holidays with a certain sense of "here we go again." Having just turned 43, never married, no kids, I was having a tough time getting up the enthusiasm to pray for these same things. How many times can you ask for the same thing, and get the same answer?

In shul Rosh Hashanah morning, I saw that two of the young women in our community were standing up throughout the repetition of the Musaf service. These two girls, Sara and Tova, were the daughters of close friends my age. Both about 18 or 19, they were each just back from a post-high-school year studying in Jerusalem, and now, according to our community's custom, "ready to get married." I knew that these girls would be praying fervently to find their basherts (soul mates) quickly and easily.

I had some understanding of why they stood through Musaf. It is an especially long prayer service, and one is not required to stand throughout, but it is considered meritorious to do so. I imagined that in this auspicious year for these young girls, they wanted to stand out before the Almighty with their piousness and sincerity, in hopes that their prayers to get married that year would stand out as well.

I envied their youthful innocence, their steadfast belief that doing something extra could make a difference in the heavenly sphere.

As I sat there behind these two girls, standing alone among the seated multitude as the service progressed, I envied their youthful innocence, their steadfast belief that doing something extra could make a difference in the heavenly sphere. I envied their chances that they would quite possibly get married that year, to young men of their choosing. I envied their physical stamina for the hours of standing, and I envied their perseverance, to stand throughout the long service while everyone around them remained seated.

How different their outlook is from mine, though we pray for the same thing, I thought to myself. How better their chances. How lucky they are. I wish I had what they have; I wish I could do what they do, with their faith. From my seated position, I envied their prayers and I believed that their prayers would be answered, and that mine, again, probably would not.

They don't want to be married any more than I do, I thought to myself from my comfortable chair. Their prayers are not more worthy than mine. They are just younger and stronger than I am, I told myself.

And then I did something I did not expect.

I stood up to show the Almighty that my prayers were as deeply felt as theirs, that my desires were as real and sincere. To show the Almighty that I am not too tired, nor too old, to embrace the responsibilities of marriage and family. Perhaps to remind myself that I can do more, be more, and that it could be possible for my prayers to be answered.

I looked at the others who were still seated comfortably around me. I made the choice again to stand. Each time the congregation stood and then sat again, I remained standing. During the songs I rocked, during the silent prayers I wept. I pushed myself physically, emotionally, spiritually. 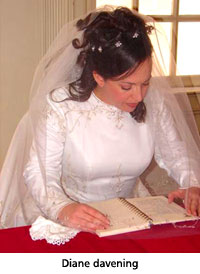 Later, during that same year, Sara, Tova and I were married within six weeks of one another -- two very lovely young ladies, and one woman old enough to be their mother. I planned my wedding as my two dear friends planned their daughters' -- we shared caterers, photographers, and a lot of laughs as a season of planning for joy enveloped us, and we danced together at Sara's, then Tova's, and finally my own wedding reception.

Last year, as the High Holidays approached, I still had one prayer left unanswered. I understood the statistics, the physical realities, the unlikelihood of success, but I was married now, and like most married Jewish women, I hoped for a child. Was my desire any less because my body was old? In fact, I thought, at 44 my desire is greater: if I am ever going to have a child, it probably has to be this year.

I wondered whether I could summon the inner strength and the physical strength to stand through the service again. Sara and Tova were no longer there to unknowingly inspire me; both were far away, living with their husbands who were learning in yeshivas in Baltimore and Jerusalem. I would be on my own this year, I thought. Do I have the commitment to persevere?

As I took my seat, I felt a terrible sense of despair. You know what? I'm not as strong as a 20-year-old; I don't have the stamina; I can't do it on my own, I thought. I knew that standing wasn't required, but over the past year I had come to believe for that year, at least, standing had made the difference.

At the closing prayers of N'eilah, the whole congregation was standing, and I was on my feet again, along with them. I knew these matters were being decided at that moment, and I wasn't sure I had done all I could. Just before the very end of the service, I leaned forward to a close friend, and whispered in her ear, "Could you ask for just one more neshama (soul) this year?" And then I burst into tears, fearing that I had failed.

A few weeks later I learned why my physical strength failed me on Yom Kippur: I was already several weeks pregnant. Months later, I learned that Sara and Tova were also expecting, our "due dates" lining up close together in the order we were married. My two dear friends were about to become grandmothers for the first time. 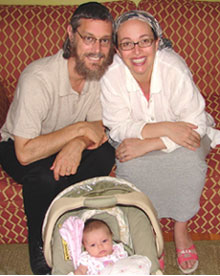 This year, Sara, Tova and I became mothers. My husband and I were fortunate to share yet another season of joy with my two good friends, and their daughters and sons-in-law...and their new grandchildren.

As the High Holidays approach this year, I wonder if I will even make it to services. I'm exhausted from night feedings. I worry that my little baby daughter will disrupt the service for others whose prayers are still unanswered. And I'm contented in so many ways. But I'll try to make it anyway, if only to express my deepest gratitude for prayers answered so completely.

When I look back at the changes in my life over the past two years, I realize what a powerful opportunity those Rosh Hashanahs and Yom Kippurs gave me -- the opportunity to stand before God and to plead my deepest desires to God, and the courage to hope, once again, for a different response.

These Lights We Kindle
Live Abortion Panel
Morality and Abortion: Three Views
There Are No Limits
Comments