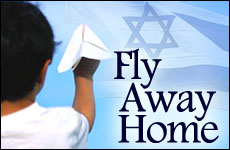 There is no inoculation for parental separation anxiety.

I knew it was coming, but the reality only began to hit me inexplicably, while selecting produce in a small neighborhood market. There, right in front of the zucchini and parsnips, I began to sob nearly uncontrollably. In less than four days, our eldest son would fly to Israel for a year of post-high school study. This was what we had planned for, what we had wanted for him. Best of all, he wanted it for himself also: a year to further solidify his Jewish identity and education before beginning college back in the States.

"But how can you let him go to a war zone?" some people asked while Hezbollah rockets were raining down on Haifa. "Won't you worry about terrorism? Will you let him go on public buses?" Indeed, many Americans have been murdered alongside Israelis in terrorist attacks, including several who, like our son, had just graduated high school. Yet none of this has deterred the American, Canadian, British and other students who continue to flock to Israel by the thousands each year for study, touring, and fun. And it did not deter us.

Understand that I am the designated worrier in the family, given my talent and experience in this area, but I will worry more about the too-aggressive Israeli drivers not watching for him crossing the street than I will about terrorism. In this post-9-11 world, one can argue that Israel is one of the safer places to be because the country is always on the alert, and defenses against terrorism are always high. Frankly, I've lost plenty of nights' sleep waiting for him to come home from parties in the wee hours of the morning right in Los Angeles. There is no place where we or our children will be totally incubated from risk.

Israel is our spiritual home.

And because we are Jewish, we feel that Israel is our spiritual home. There is an intangible quality to life there -- some can sense it in the very air -- that surprises and captivates visitors, Jewish and Gentile alike. They can feel the transcendent quality of the land and of many of its people, hear the stories of the unbelievable miracles that continue to happen there. So in one sense, we felt like we were sending him home. His address book is also filled with names and phone numbers of friends and relatives who will welcome him for Sabbaths and holidays, giving him a welcome break from the thin mattress of his dorm room and the far less-than-gourmet school food.

That's why none of my tears were for any danger I felt our son would be subjected to. I was only taking my turn in a story as old as time: the rite of passage of watching a fledgling adult child leave home. I'm not normally hyper-emotive over my kids, other than graduations, when I admit I fall to pieces. But the sight of those huge suitcases in his room turned me into one maudlin mom. Though we expect him back next summer, home will only be a way station till college -- out of state.

Standing in the corner of the market, naturally without enough tissues, precious, precocious, and perilous memories of our son replayed in my mind. Without consciously willing them to appear, I watched home movies on my Mom-based hard drive. I watched him, not quite two, picking a lemon from a neighbor's tree, and after I told him he could not pick something from anyone else's tree without first asking permission, he raised the lemon back to the branch, trying to return it. I watched him with utter determination at five, swinging a fat plastic bat for T-ball, and over the years, taller and taller, using slimmer bats, swinging harder and faster, through seasons of league baseball. I saw him at six, suddenly darting out like a rabbit into the street in front of our house and nearly getting run over by a fast-approaching car. I was pregnant at the time and am still amazed that the fright didn't put me into early labor.

I was flooded with memories of his achievements, his hurts, the often painful challenges of growing up in an imperfect family and with a mother who worries too much and so often seemed almost unbearably old-fashioned. And I recalled the battles over homework, computer time, friends, movies, driving (including the scrapes on my brand-new car) and other boundaries that parents are forever trying to keep and children are forever trying to breach.

I tried to get a grip, remind myself that it was time for him to go. "The empty nest is underrated," someone had joked not long ago, and I repeated it like a mantra, though it felt a little silly, as my nest still has three kids in it.

"You didn't tell me it would be so hard," I said to my friend, one of many who has already been through this transition with her own children. "Yeah, it's a toughie, and it doesn't necessarily get easier," she acknowledged. On the other hand, what could I have expected? I don't think there is an inoculation for parental separation anxiety.

The reality of the separation between our son's childhood and his adult life, and our impending separation across 11,000 miles, felt too raw.

Eventually, I collected myself enough to leave the market, but I cried frequently all weekend. On Saturday night, we ushered out our Sabbath with the brief, traditional Havdalah ceremony. "Havdalah" means separation, in this case, between the holiness of the Sabbath and the mundane quality of the rest of the week. But this time, watching the special braided candle burning, the reality of the separation between our son's childhood and his adult life, and our impending separation across 11,000 miles, felt too raw. I was crying too hard to join the rest of the family in the short song that we sing at the end of Havdalah where we wish for a peaceful and good week. It was now only 36 hours till his departure. My son and I held each other for a long, long time, and it occurred to me that it was the first time in our relationship where he had to truly comfort me. Finally I managed to blubber the words, "Make sure I'm on your email buddy list."

My emotionalism may just be another sign of how soft we are compared to past generations. Before email, before telephones, before air travel, people bid farewell to loved ones who traveled by perilous sea journeys. They did not expect to hear from their relatives and friends for months, hoping and praying to hear of their safe arrival. Today, we are frustrated if we can't reach a loved one while their plane is still taxiing into the gate. My son is instantly reachable by phone, but I also realize that our son's journey involves gaining more independence. It is time for him to grow and develop himself as only he can do with space from us. I am confident that he has the skills, the smarts and the sense of purpose to succeed. But I won't pretend that I wasn't thrilled to hear from him three times in his first week away.

This is the same son who has tutored his younger siblings in the art of Dodger baseball mania, and now that the Dodgers are slamming homers and looking like contenders for the playoffs, I feel it my duty to keep up with this important news. I am keeping our younger kids company as they watch the games on ESPN, and I was proud to be the one to send an email to our boy overseas with my own very imperfect recap of a 14-5 blowout of the Colorado Rockies.

When our son completes his year in Israel, he'll be a different young man, more confident, more mature, and probably with a deeper appreciation for his thick mattress at home and for my cooking. And we will be proud to see that this was what we were working for all along, to help guide a tiny, writhing mass of newborn through the years and hope and pray that on the other end we will discover an independent, ethical, good person, a mensch, as we say in Yiddish. And by the time we see this newer version of son 4.1, I'll have one more year to gear up to send off another one for the same adventure.

Alzheimer’s and the Here and Now
The Jewish History of Prague
Why the Sexual Revolution was Bad for Women
The Princess: Sukkot
Comments
MOST POPULAR IN Family
Our privacy policy
Aish.com Is Looking for Great Writers