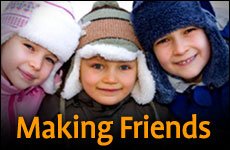 "Mommy! Daddy! Nobody likes me. I don't have any friends at all."

Although quite common, these are words parents dread hearing from their children. Next to health, close friends are one of the things parents want most for their children. And when children are failing socially, in school, at camp or on the block, their parents are at least as upset and disturbed as the children themselves.

If a child feels unliked and unaccepted by his peers, it can become a crisis of major proportions at home. The child may be moody and cranky. He may become uncooperative, stubborn or disrespectful. He certainly will be very unhappy and dejected.

While you cannot make friends for your child, is there anything you can do to help? If so, what is your proper role in facilitating your child's making friendships that last?

WHY FRIENDS ARE SO IMPORTANT

The first thing you need to do is understand why friends are so important to your child.

While your child is an infant and toddler, friendships are very irrelevant and insignificant to him. His entire focus is on you, your spouse and his siblings. Your family makes up his entire social world.

Once your child enters preschool, however, he enters an alien, competitive and sometimes hostile social universe. In order to survive, he must succeed at making friends.

Without friends, your child lacks partners for games and play, companionship during free time and, most importantly, allies for protection against bullies and other aggressors. Without friends, your child feels alone and is alone. Not having friends undermines your child's self-esteem and erodes his confidence. It heightens his insecurities and fears. And it may make him want to avoid camp, extracurricular activities and even school itself.

THE REASONS FOR FRIENDLESSNESS

The next thing you need to understand is why your child is having so much difficulty making and keeping close friends. The following is a list of some of the main causes of friendlessness among children.

• Shyness. Some children are naturally quiet, reserved and socially cautious. As a result, they feel anxious in social settings and have a hard time meeting new people. They hardly ever initiate conversation. And they may even shrink away from others who make efforts to reach out to them.

• Aggression. Some children are too rough with their peers. They fight easily, prefer confrontation and intimidation over negotiation and compromise. These children tend to win their battles but lose their friends. And their classmates avoid them.

• Immaturity. Some children lack the basic social skills that other children take for granted. These children are clueless about what constitutes appropriate behavior in any given circumstance. They often embarrass themselves, albeit unintentionally, as well as their playmates. They also find humor where their peers do not. And they cannot understand why their jokes are not appreciated by others.

• Narcissism. All children are self-centered to some extent. That is normal. Some children, however, tend to be much more self absorbed than the rest of their age group. These children can only tolerate playing their games, going to their favorite pizza shop or listening to their favorite music. They expect to be invited much more than they invite others. This imbalance is not overlooked by their classmates and can lead to their social rejection and isolation.

Once you have at least a good guess as to why your child is having difficulty making and keeping friends, you can then move on to the next step: developing a plan to solve this problem.

Any strategy to remediate your child's lack of friends will fail miserably unless it is developed together with your child. You cannot expect to simply present your scheme as a finished product to your child. Rather, you must construct the program as you would a model ship or car you were building together with your child. You would not attempt to complete the project all by yourself. Neither would you expect your child to work on it alone. By working together, however, you would achieve the best results along with the most learning and growth on the part of your child.

During the course of your deliberations with your child, you could toss in a few of the following suggestions.

2) Initiate conversation with a potential friend about a subject that would interest him. For example, "How was your weekend?" "Who is your favorite teacher?" "What is your best sport (game, subject, etc.)?"

3) Invite someone to join you in a game, for a walk, for a bike ride, for supper or for the weekend. Or, just offer to do homework together. Everyone is flattered by an invitation. Even if it is not convenient for him to accept now, he will still remember in the future that you reached out to him.

4) Share something to eat. Offer some of your snack. Or, suggest that you both go out for a soda or pizza together. Sharing food is a great way to further any relationship.

5) Send an e-mail or text message. Or, make an old-fashioned phone call. It does not matter so much what you say that counts. What will be remembered and appreciated is that you took the time and made the effort to contact him.

6) In order to achieve the long-term goal of making friends, try to make the short-term concession of deferring to others and accommodating their wishes. The importance of this suggestion is best illustrated by the following case history.

THE CASE OF ESTHER

Esther's parents were in full crisis mode. They both felt desperate as they described their daughter's problem.

Esther had had a falling-out with her closest friends. For the next four weeks she went out of the house only to attend her 10th grade classes. Every evening, and especially on weekends, Esther moped, cried and angrily complained that she had no friends. Her parents could no longer tolerate Esther's histrionics so they asked me to meet with her.

During the first session, Esther cried bitterly, as she vented her feelings of self-pity and hopelessness. In the second session, she described the composition of her class and explained why it was unrealistic for her to expect to have any friends in school. At the third session, she began to give me some of the history of her relationships with her former friends. At that point, it became clear to me how self-absorbed she had been within her social circle.

Initially, I could only sympathize with Esther because that was all she could tolerate hearing. Gradually, I began to problem-solve with her about how she could repair the rift. At first, Esther insisted that she no longer wanted to be their friend. Eventually, however, Esther consented to making reconciliation a short-term goal of our work together.

We started by looking at some of Esther's comments and actions from her friends' point of view. Esther admitted that "occasionally" she had been selfish and demanding. Finally, Esther agreed to try my "experiment."

For the sake of reconciliation, Esther would apologize for a hurtful comment she had made. Furthermore, she would consent to join her former circle of friends wherever they went and without any complaints for a one-week trial period.

At the beginning of our next session, Esther's broad smile and cheerful greeting told me all I needed to know. Yes, Esther had succeeded beyond her wildest dreams. She had become reinstated with her former circle of friends and was now so busy with them that she was pressed for time.

Surely, not every lonely child can succeed as quickly as Esther did. And repairing damaged friendships is sometimes easier than building new ones. But every friendless child can make some progress, with proper parental support and encouragement, toward making solid friendships that last.

The Importance of Play: 8 Ways to Nurture Your Child’s Mental Health

Raise Your Kids without Raising Your Voice: Comment, Label, Reward