Slavery of the Aimless 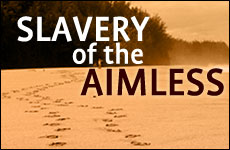 Why is slavery the worst thing that can happen to a person? Why is it worse than death? The answer is as simple as it is profound.

"We were slaves to Pharaoh." "For God redeemed you from the house of slavery.""They will be strangers in a land not their own, and they will be enslaved."

One cannot study the story of Passover without the word "slave" cropping up. The theme of dozens of paragraphs in the Torah is that the darkest period of the Jewish people was the period of slavery in Egypt, and that Passover was a gift of redemption from slavery.

No one can argue the horrors of slavery. The details of the African slaves brought to the United States rightfully horrify people and there is no reason to suppose that the Egyptians were any kinder or gentler. Our Midrashic tradition is full of horror stories about the treatment of the Jews in Egypt.

But was this truly the worst thing that happened to the Jews?

By the time the redemption came around, the Egyptians had already murdered many Jewish children. Should the focus not have been on the infanticide rather than on the slavery?

Additionally, when God spoke with Abraham (Genesis 15;13) He foretold all kinds of disasters for Abraham's descendants, including:

It is clear from this that torture and slavery are considered separate afflictions. Enslavement even without any physical hurt or pain is terrible in its own right. And when we refer to Israel’s woes in Egypt we are primarily referring to the enslavement rather then to the accompanying physical hurt and pain.

We also see the stress on slavery in the first of the Ten Commandments.

God introduces Himself as the God that has redeemed us from slavery. If we are dealing with God’s greatest act of redemption, why not speak of the God that saved us from death? Why is God presenting this particular calling card.

THE MEANING OF SLAVERY

To understand what the true meaning of slavery is, we must distinguish between the terms used to describe "work" in the Hebrew language. There are two words: avodah and malacha -- both are usually translated as "work."

Maimonides explains that malacha has a finished product as its climax. This is the type of work forbidden on Shabbat.

On the other hand, avodah describes labor without any real purpose or accomplishment. The term for a slave –- eved –- is a derivative of this word. An eved is someone whose effort produces work with no goal or accomplishment. He exists in order to work. The goal of his work is someone else’s agenda.

The owner may or may not treat the slave properly. He may be fed or starved, worked to the bone, or used sparingly. It matters not. For the real tragedy of slavery is that the human being is not given the ability to determine the purpose of his labors.

Thus, when God told Abraham that his children would be slaves and also tortured, we rightfully note that these are separate issues -- the aimless, purposeless life of a slave, and the added hurt of physical affliction.

This understanding also addresses our second question. Why did God describe Himself as the one who redeemed us from slavery, rather than the God that saved us from death? For saving us from death at the hands of Pharaoh is not as historically significant.

As we left Egypt, we began to search for meaning and purpose. For even "paying bills," or "putting kids through college," or "retiring comfortably" seemed of limited value. Having such a purpose is better than just working without any worthwhile reason. But as a purpose for human life and for human feeling and intelligence, for a God-inspired soul, such a purpose seems meaningless.

Therefore, God at Sinai opened up His commandments to us with the ultimate calling card: "I am the God that put you through the ordeal of life without purpose or meaning. I started the task by physically redeeming you from Egypt, but the job is not over yet. Now I will show you what the sum total of life is for. It is a life that struggles with one’s physical self in order to bring out one’s spiritual self."

It is no accident that on the second day of Passover, we begin the count-up towards Shavuot, the holiday of the giving of the Torah.

On the first day of Passover we savor the flavor of redemption of slavery. But, as we bask in the pleasant sensation of being able to determine our own destiny, we realize that in order to have a destiny worth striving for we must have a spiritual component to our lives, and that takes place when God reveals His Torah to us on Sinai.