My Mother, My Child 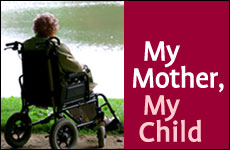 I made a promise I would take care of Mama.

I am a mother. I'm just a different kind of mother. I did not give birth to my child. She was not young in age, but was nevertheless someone who needed to be mothered.

My mother and I were inseparable. I chose her clothes, I guided her, I took her to the doctors and hospitals, I made all the decisions just like any parent. When Mama was ill I gave her the "yucky" medicine as she protested the taste. As Mama got sicker, I changed diapers, I fed her and stayed up all night worrying with fear.

It is one of the Ten Commandments to honor one's parents. I tried to fulfill this commandment with all of my abilities until the day that my dear mother passed from this world, leaving me a child without a mother and a mother without a child...

When I was a little girl, my Mama got cancer. Even though I was only four years old, I somehow instinctively knew how to take care of her. The cancer did not keep Mama down too much. She had her "sick days" when I tried to tend to all her needs, but she generally took care of us, the cooking, cleaning and running of the household, as if she were in perfectly good health. However, because there were times when she couldn't get out of bed, playing with friends was secondary for me. Though the oncologist had only given my Mama a maximum of six years to live, several more had passed and life seemed stable.

When I was 14, tragedy struck. My father, may he rest in peace, had a sudden heart attack and passed away in less than 12 hours. I made a promise to him when he passed. I told Dad not to worry. I would take care of Mama. My mother was numb. She drowned herself in daily chores. Within two months, Mother ended up in the hospital in the intensive care unit in the exact same room Daddy had passed in. The doctor told me when one spouse passes -- the other often gives up and loses the will to live. I wasn't ready for this.

Mama had instilled many lessons within me. Mind over matter. Where there is a will, there is a way. There is no such word as "can't." God helps those who help themselves. I never knew just how much in life I would come to depend upon those lessons. When Mother came home, she resorted to her rocking chair for comfort, just as she once rocked me. But I was determined to get Mom out of that chair no matter what I had to do. And along with my mothering abilities, I mastered the "Jewish mother guilt" routine perfectly!

Often Mama would slip her hand between the rails of her hospital bed reaching over for my hand.

I pleaded. I begged. Finally all my hard work paid off and I got her up and moving about. There were times that Mama would come out of her room with mismatched clothes, torn stockings, and lipstick that didn't match. I would look at her and say, "Go back to your room and change your clothes. You're not coming out with me looking like that. We may be poor, but we're not paupers." Mother would resist. I stood firm.

I refused to let her sink into depression. We kept fighting and pushing and trying to keep life as normal as possible.

Eventually Mama got to the point where she cared how she looked. She would ask me, "Does my skirt match my blouse? Does my lipstick match?" I refused to let her sink into depression. It became my duty to make sure she was not just physically alive, but emotionally alive as well.

The years passed. Parkinson's Disease, lung disease, strokes, gall bladder disease, and a host of other ailments all wreaked havoc upon Mama's body. But we didn't give up. We kept fighting and pushing and trying to keep life as normal as possible. We lived it up as much as my Mama's body would allow.

I would pack my diaper bag, an extra oxygen tank, put Mom in her wheelchair and we were out the door and off to the circus, the zoo, many lunches. Mother's favorite was a hot corn beef on rye with a kosher dill pickle. When it got to be too exhausting for Mama to get in and out of the car, I invented the "Car Picnic." No biggie -- I opened the sunroof, pulled out the cup holders, and viola.

Since going on a vacation was out of the question, I invented one. I called the oxygen company, packed up the car with everything but the kitchen sink, and within thirty minutes we were at our destination: a three star hotel with an indoor Olympic-sized swimming pool.

I made sure my Mama had the best I could provide. Like any parent of a sick child, I tried to make life as normal and pleasant as possible. No sponge baths. I bought a bath buddy which consisted of a full swivel chair that raised and lowered Mom into the tub. I bought Mom a scooter. I dressed it up with a white fringed awning, a basket in front for our dog Yankul, a horn, and an oxygen basket on back. Totally cool if I do say so myself.

By the end of the day, after I had changed her, fed her and she was ready for bed, I would give her a pint of her favorite ice cream and sit by her side as she would relax, blissfully content. Often Mama would slip her hand between the rails of her hospital bed reaching over for my hand. We would hold hands just smiling at one another. Regardless of her physical pain or her most recent ailment, we were both so happy. All that mattered was that we were together. Mom would tell me she would talk to God every morning and thank Him for allowing her to wake up and she would ask for strength to make it through another day.

Then my Mama had a brain stem stroke. The brain stem controls all the vital functions of the body. Mama was a vegetable and was not expected to live long. But once again, God had other plans. Nothing was going to stop me from caring for her or convince me to give up. After stabilizing Mama in the hospital, she went to the Hebrew Home for rehabilitation. An IV, pick line, feeding tube, oxygen mask, and deep suctioning were now needed twenty-four hours around the clock for Mama's existence. I will never forget the nurse's words when I told her "I'm taking my mother home." She looked at me with a look that defied my very being and said, "I'll believe it when I see it."

I cried my eyes out. What did I know? I was just a lay person. I had no medical training. Just the same, my mothering instinct kicked in and I knew what was best. I indeed took her home, but with not without mixed emotions. I was happy to have my Mama home, but could I rise to the occasion? How would I manage? "God help me to take care of Mama, please. I am so frightened."

Mama gave me gifts only a mother could understand. To love and be loved unconditionally.

Indeed He did. My home was now an ICU. The doctors -- heads of the departments, mind you, would come to my home regularly to treat Mama. One even would turn my home into an operating room -- scrubs and all to adjust Mama's pick line. They were all so dear. Never wanting to charge a penny. For the next two years my sweet mother lived. And not as a vegetable.

Somehow I found the secret and Mama woke up. Not exactly the same, but she knew me. You cannot imagine my joy when she called me Edie. She could even hug me with one arm and kiss me. I was so grateful to have her back. Life was not easy, but oh so well worth it. There were many nights when I deep suctioned in my sleep and I wondered how I did it. I did not do it. I was not alone. It was God who gently guided my hands.

My mother gave me the tools to survive. Listen to your doctors, let your patient be your guide, but always know God will have the final say. She taught me to treasure each moment as if it were a present wrapped with dangling bright bows of satin lace. Mama gave me gifts only a mother could understand. To love and be loved unconditionally.

I cared for her and spent night and day with her until it was her time to leave this world. My Mama brought me into this world. I was by her side when she left it.

Now I see mothers with their children and I ache with emptiness. When a parent asks me if I have children, I tell them my mother was my child and they look at me with questioning eyes. I simply don't know how else to answer. After all, was I not a mother?

Edith Brown, a native of Washington DC, currently lives in Maryland where she volunteers for the American Cancer Society. She also started a Parkinson Support Group which she ran for five years. Edith has won various awards the for the excellent care she provided her mother.

Behind the Façade, a Human Being