My Meeting with the King 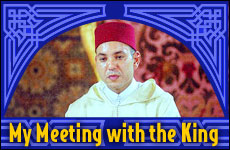 Meeting the King of Morocco opened up new vistas in my understanding of God.

News that the King of Morocco was arriving in Chile was fairly low-key, since only a week earlier world leaders -- including President Bush -- were in Chile for the APEC (Asia-Pacific Economic Cooperation) Conference. So when my friend Maurice came running into Aish Chile with a big smile on his face, he explained that he was part of a delegation of local Moroccan businessmen who had been at the airport to greet the king, 41-year-old Mohamed VI.

Meeting the king is a childhood dream for any native of Morocco, a country on the northwest tip of Africa, just across the strait of Gibraltar from Spain. And now, many years later in Chile, Maurice finally got his chance. So half-joking, I asked him, “How come you didn't get me a meeting with the king?!” He answered that he was going to have a dinner cocktail with the king's right-hand man, Andre Azoulay, a Moroccan Jew. So I said, “See what you can do -- I'd love to meet the king!”

Less than two hours later, Maurice was on the phone with the news that a meeting with the king was being arranged. I thought he was joking. But the next morning I received a phone call from the Moroccan ambassador in Chile, politely confirming my meeting with the king, on Friday at 11:30 a.m.

Be careful what you pray for; you might just get it.

Oh, great! Now what do I do?! There's an old Jewish expression, “Be careful what you pray for; you might just get it.” Now that the meeting was a reality, I had no idea of how to utilize this opportunity. I've met heads of state before (I'm so popular!), but meeting a king from an Arab country somehow made it much more overwhelming.

Morocco's monarchy has a family tradition of respecting the Jews. The previous king, King Hassan, tried to protect Jews from riots that broke out in the wake of Israeli independence, and his predecessor, Mohammed V, is widely credited with having saved Morocco's Jews from deportation during World War II.

In Morocco -- although the Jewish population has dropped from 265,000 in 1948, to about 5,500 today -- there is one of the most tolerant environments for Jews in the Arab world: Moroccan Jewish emigres, even those with Israeli citizenship, freely visit Morocco, and Moroccan Jews hold leading positions in business and government.

So I started consulting all over as to the protocol of this encounter. Can I bring my wife Myriam (whose parents both happen to be Moroccan)? Do I bring a gift? Do I double-kiss his cheek? Kiss his hand? Bow down? What do I wear? What will we talk about? Should I ask for an invitation to Morocco? Can I speak about the Middle East conflict? And most importantly -- can I bring my camera?!

Then I stopped to think: If this is so exciting, then I should feel at least this much excitement when meeting God, the King of Kings. So why don't I feel such a surge every time I pray the Amidah, three times a day?

I began to realize that this opportunity to meet a king is more than just the meeting itself -- it would also be a profound lesson on how to relate to Almighty God.

At 9:30 Friday morning I started getting dressed. I figured an hour should be enough. My wife -- who was allowed to accompany me as far as meeting the government ministers -- kept wondering why I was trying on so many different combinations of clothes. (I was trying to find the right colors for the mood…)

Blessed is the One Who has given of His glory to human beings.

Forty-five minutes later, I was dressed and ready to go. I had to laugh at myself, since this was the first time that I wasn't the one saying, “Honey, what's taking so long to get dressed...?!”

We got to the hotel an hour before the meeting was set to begin. I had my siddur, with the blessing that one says when meeting a king:

Blessed is the One Who has given of His glory to human beings.

I had also brought a beautiful present for the king: a silver-framed blessing that Jews say for the welfare of the king.

It is so important to have the king's support. In May 2003, when a series of suicide bombers attacked Jewish targets in Casablanca, the king immediately visited the site, urged the Jewish community to rebuild, and pledged to guarantee the community's safety. The government then organized a large rally in the streets of Casablanca to demonstrate support for the Jewish community.

We pray for God to continue to grant His kindness, by sending rulers that are benevolent to our people. And ultimately it is all in God's hands, as King Solomon wrote, "Like streams of water is the heart of a king in the hand of the Almighty. Wherever He wishes, so He directs it." (Proverbs 21:1)

Floating Toward the King

Upon arrival we were greeted by a Moroccan government official who took us to a waiting area. I was told that the meeting would be delayed until 1:30 p.m. So we sat for two hours, in fascinating conversation with the king's advisor, Azoulay. We were also interviewed by Moroccan TV, and we met with the man who introduced Menachem Begin to Anwar Sadat.

Actually, Morocco is perhaps Israel's closest friend in the Arab world. King Hassan often encouraged the peace process from behind the scenes, and in 1993, Yitzhak Rabin paid a formal visit to Morocco -- the first Arab nation outside of Egypt to officially receive an Israeli leader.

The big moment finally arrived and I was escorted upstairs to a room that was prepared for the royal reception. I was surprised to recognize this as the same room I have used dozens of times before -- as a reception room for the groom before the chuppah. Incredibly, in Jewish tradition, a groom on his wedding day is also regarded as a “king.”

At least 30 uniformed Moroccan guards saluted as I entered the room where the king was waiting. The feeling at this moment was powerful and mystical, as I felt like I was floating toward the king.

I realized I needed God's help to succeed, to say the right words and to make the right impression. I silently prayed to “find favor in the eyes of God and man.”

As I reached the king, I kissed his hand, and quietly recited the blessing for seeing a king. He welcomed me warmly. I offered him the present, and proceeded to sing the prayer for the king, using an old Yemenite melody. He was very moved and thanked me.

He explained that protecting the Jews is his duty to God.

The king said that he heard my wife was from Morocco. I told him how fortunate I was to have married into a Moroccan family, and how fortunate the Jews in Morocco are to have a king like him. I thanked him for his family tradition of protecting the Jews, and he explained to me that it is his duty to God.

I knew that my meeting was going well when he said, “I want to personally invite you and your wife to visit me in Morocco.” I thanked him for the honor and said, “Shalom.” I walked backward a few steps, and was escorted out by a guard.

Azoulay told me that of all the people who had met the king, I was the only one invited to Morocco. Azoulay made clear that I obviously had to accept the invitation. I was again interviewed by Moroccan TV, and then said goodbye to the ministers.

This experience was much more powerful than I ever thought it would be. Among the many lessons and insights, here are a few:

1) The preparations I made to meet the king will definitely enhance my prayer preparations, and make my relationship with the King of Kings much more real. Sometimes during services we may space out. But if we are conscious of the fact that we are speaking to the King, that is not possible.

2) Even though the king doesn't need my presents, the fact that I prepared something showed that I cared about him. So too, God doesn't need us to follow His commandments -- but we need them, to show that we are respectful, appreciative, and care enough to make the effort.

3) I had to wait for two hours to meet the king, and arrived an hour early. The Almighty is always ready for us to talk to Him. We should take advantage of this open door policy, and come to synagogue on time. It's a lack of respect to come late to such an important meeting.

Shoshan Ghoori is the director of Aish Chile.

I Am Jewish
In the Shadow of David and Goliath
Where Do the Laws of Nature Come From?
Saadiah Gaon, Rashi and Maimonides: How Three Rabbis Revolutionized Judaism
Comments