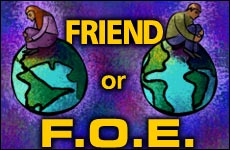 If you're a single man or woman between the ages of 18 and 59, chances are you'll spend half your adult life unattached… Adults today can expect to spend an average of about 19 years living alone… -- University of Minnesota News

Persistent long-term trends suggest a steady weakening of marriage as a lasting union, as a major stage in the adult life course, and as the primary institution governing childbearing and parenthood. Young people's pessimism about their chances for marital success combined with their growing acceptance of unwed parenthood also do not bode well for marriage. -- State of Our Unions: The Social Health of Marriage in America, 1999

The landing page for the website of "Unmarried America" shows the Capitol building flanked by two gigantic American flags. The words below proclaim: "Welcome to the website for America's new unmarried majority."

"Being in a real relationship just complicates everything."

Unmarried majority? Do unmarried adults really outnumber married people in America? No, but just barely. According to the U.S. Census Bureau, 52% of Americans over the age of 15 are married, down from 64% in 1975. For those who attribute this decline to greater longevity rates, leaving more widows and widowers, the facts are sobering: 29% of American adults have never married, an increase of 5% since 1975. More than 14% of American adults live alone.

Although many singles would jump at the opportunity to marry, many others are "single by choice," opting for the apparent "freedom" of singlehood over the complexities and self-sacrifice of a committed lifetime relationship. A recent New York Times article documenting the decline of dating and affectionate relationships among America's youth quotes 16-year-old Brian: "Being in a real relationship just complicates everything." Brian's ingenuous admission may speak for more adults than would care to admit it.

In the Jewish worldview, the eclipse of relationships, which are defined by caring and giving, is not just another lamentable symptom of post-modern society gone awry. Rather, genuine relationships – with God, with other human beings, and with oneself – are the raison d'etre of human existence. To spurn relationships is not only to lose the game, but to negate the very purpose of playing.

The Force of Disconnection

The Torah repeatedly warns against submission to the "el zar." El zar is usually translated as, "strange god," but it can also mean, "god of estrangement." The el zar is the force of disconnection and alienation. As the great contemporary sage Rabbi Shlomo Wolbe writes: "What a frightening force is the el zar, which transforms a person into being a stranger to himself, to others, and to his Creator – truly a stranger, without emotion, without understanding, without connection, without love!" [Alei Shor, p. 83]

The el zar or Force of Estrangement (F.O.E.) is counter juxtaposed to the true God, the God of oneness. The credo of Judaism, "God is one," means something more profound than "one" in the sense of "not two or three." God's "oneness" is pure monism, the ultimate unification of everything in reality and beyond.

Of course, the F.O.E. itself is a creation of the One God, who, in granting human beings free choice, offers the polarities of good and evil, love and hate, connection and disconnection. Like everything else in creation (except for human beings), the F.O.E. is a servant of God, entirely under His control. God unleashed the F.O.E. in the world in order to maximize the free choice of human beings. The Talmud refers to this world as "olam yididut," a world of closeness or intimacy, a world of relationship. The choice, however, between relationship and estrangement is entirely ours.

Jewish theology also calls the el zar the "evil inclination" and "the accuser" (in Hebrew, satan). It is a wily force, which disguises itself as righteous indignation, adherence to principles, and a multitude of other lofty claims. Whatever its costume, the F.O.E. can always be recognized by its effect: it creates distance.

A Scrooge-like repudiation of other people obviously destroys relationships. Sometimes, however, the F.O.E. comes disguised as relationship itself. Such "relationships" are really anti-relationships, for, in the process of forming a bond, they destroy a potentially closer bond.

A parent who spends hours helping the homeless, but has insufficient time for his or her own children is partaking of anti-relationship.

For example, an adulterous liaison may look like a relationship, but it destroys the quintessential relationship, which is marriage. A parent who spends hours a week helping the local homeless, but has insufficient time for his or her own children is also partaking of an "anti-relationship." (The average American teenager speaks seven minutes a day with his mother and five minutes a day with his father.) A Jew whose heart bleeds for the Palestinians but who feels no anguish when a fellow Jew is murdered is also in the grips of the F.O.E.

To understand how different relationships have different inherent potentials for bonding, we can assign a numerical "bonding value" to various relationships. For example, you could form a relationship of love (=giving) with a drug addict in your city. I did that. With all my involvement with Mayan, the differences between us were too huge to form a bond deeper than, let's say, 5 out of 100.

Whenever you opt to devote yourself to a relationship with a lower potential value at the expense of a higher value relationship, you're really choosing against relationship. If I spend so much time tending to my children that I never have quality time alone with my husband, I'm serving the F.O.E. in its possibly most cunning disguise.

Sadly, a society which fails to recognize "anti-relationship relationships" as a disguise of the F.O.E. is a society likely to end up with a 60% divorce rate.

In The House of Mirrors

One who lacks positive relationships with other people is locked into a house of mirrors. These mirrors, however, are not the narcissistic reflecting glasses that treat an egotist to her favorite view: herself. Instead, they are like the "house of mirrors" (usually next to the "haunted house") in an amusement park. They distort the image they reflect – this one short and fat, that one tall and skinny, and all of them wavy and warped. Bad character traits give a person a distorted image of herself, until she becomes as estranged from her true self as she is from others.

This self-estrangement is most apparent with the trait of anger. After people calm down from an angry outburst, they often say, "I'm sorry. I lost myself." This is literally true.

According to Rabbi Wolbe, the power of jealousy and pride to estrange one from oneself is more subtle. It works like this: Let's say Susan is jealous of Marlene. She thinks, "Marlene is so thin, has a gorgeous house right out of Better Homes and Gardens, and always knows the right thing to say." In focusing on Marlene's advantages, Susan becomes oblivious to her own good points: her sense of humor, her affability, and her compassion. By seeing herself only in terms of what she lacks that others have, Susan acquires a distorted self-image. Jealousy has locked her into the house of mirrors.

Pride works in a similar fashion. If Elliot is swelled up with pride because he graduated with honors from Harvard Business School and succeeded in becoming the CFO of a Forbes 500 company just three years later, he is focusing on part of himself-his intelligence and business acumen. He is apt to be oblivious to many of his other qualities, such as his abruptness and stinginess. And he may blame his bad temper on the ineptitude of his co-workers. Clearly, Elliot does not know himself. The F.O.E. has him by the throat.

Rabbi Wolbe makes a startling revelation: A person who serves the F.O.E., the force of estrangement, will be disconnected consistently in all his relationships-with God, with other people, and with himself.

This explains a surprising statement by the 16th century sage Rabbi Haim Vital. Rabbi Vital wrote that virtually a married man's entire portion in the Next World is determined by his relationship to his wife. But what of the person who is devoutly religious and performs major works of charity notwithstanding his embattled relationship with his wife?

According to Rabbi Wolbe's principle of consistency in relationships, such a person's piety and charity is not motivated by love (=giving), but by selfish interests. We cannot know what goes on in another person's heart, but alienation from one's spouse – the quintessential human relationship – is a telling sign of fealty to the force of estrangement. Allegiance to the F.O.E. works like a cancer in all one's relationships.

The F.O.E. is vanquished by the development of good character traits.

The F.O.E. is vanquished by the development of good character traits. The more one practices (not just talks about) generosity, forgiveness, and love, the more one serves the God of Oneness. The result is improved relationships in all spheres.

The essence of relationship is love, or, more accurately, ahava. While the Hebrew word ahava is translated as "love," it literally means "I will give." True love is giving.

While a healthy relationship usually consists of mutual love or mutual giving, the contemporary insistence on mutuality ("I'll make dinner if you do the dishes") is the converse of love; it's a symptom of mutual taking.

All human babies are born takers. To learn to love, or give, requires tremendous effort and dedication to spiritual growth. The optimum laboratory for such inner work is close relationships. Inner growth is both the prerequisite and the product of successful relationships.

Working on becoming a giver is difficult and demanding. No wonder so many Americans are loathe to undertake the challenge. A just-released survey by the National Marriage Project at Rutgers University reported that among the unmarried men who were surveyed, a majority agreed that "at this stage in my life I want fun and freedom."

Mel Gibson and the Jews