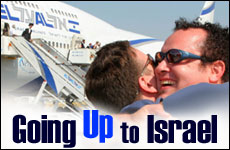 Fulfilling the dream had never been easier.

I was ingrained with the attitude to always reach for the sky, to move upwards in whatever I do. My husband and I recently fulfilled an important milestone in our quest for climbing upward: we made aliyah – literally translated from Hebrew as "going up" to Israel.

For as long as Jews have existed, we have longed to come to the land of Israel. Our forefather Abraham had to leave his family home in a split-second when the Almighty told him "lech lecha," "go for yourself" to the land that I will show you. Without images of a sunset at the Kinneret, the holiness of the Kotel, the beaches along the Mediterranean, and the rolling landscapes of the Judean Hills to draw him to Israel -- not to mention the convenience of Voice-over-IP and webcams to communicate with loved ones back home, Abraham had to set off into the desert to face many difficult and intense trials in order to get here. And after finally arriving, famine forced him to leave again!

Although my husband and I had to go through some serious trials of our own to get here -- like giving up our freshly purchased liquor and refreshments at JFK due to this insufferable no-liquid policy, receiving crackers on the airplane instead of those delicious salty peanuts, and waiting 10 minutes for our pre-paid personal taxi to take us to the apartment waiting for us in the Old City of Jerusalem -- it's safe to say that our forefathers had it a little more difficult than we did on their way to Israel.

While the trials of our journey may have been petty, the decision to make aliyah, leaving behind family, friends, and the familiar comfortable life we're used to, is always a difficult one. Although the factors that brought us and the 220 other olim chadashim (new immigrants) who we flew with on our chartered Nefesh B'Nefesh flight to Israel are all different, we all share one thing in common: we were not forced to leave our former homes, but rather we felt drawn to our homeland, the land of Israel.

So what is so special about Eretz Yisrael that people have to "go up" to it rather than just go to it? As anyone who has visited Israel can tell you, there is a feeling in the air as soon as you step off the plane in Ben Gurion Airport that you are in a special place. While this exciting, charged feeling is somewhat indescribable, its effects are profound. When I'm in Israel, I feel alive, not just because I feel energized and re-invigorated, but because I feel connected to thousands of years of Jewish history, history that is as relevant in my life today as it ever was.

For me and my husband, the miracle of Jews being free in the land of Israel for the first time in 2000 years is one that we desired to be a part of. We feel we are actively making a difference in shaping the fulfillment of Jewish destiny – not on the sidelines, but right in the thick of things.

It will certainly be difficult to be so far from our families, but with the help of instant messenger, cell phones, and direct flights from my hometown of Toronto to Tel Aviv, we believe that the advantages of living in Israel far outweigh the disadvantages. After all, who am I to pass up the most incredible opportunity of our time, the one that our ancestors pined for throughout centuries?

Julie Amar is a native of Toronto who now lives in the Old City of Jerusalem with her husband and three kids. Julie writes about her life as Jewish woman, wife ,mother, homemaker, chef, 'returnee' to Judaism, educational supervisor, entertainer, relationship advice-giver, and wannabe entrepreneur at her blog mysweetjewishlife.blogspot.com . She would be thrilled if you would check it out!

Of Fares and Fairness
Korach 5782: Visit to Lift the Spirit
That Time The Ivy League Found A Way To Limit Jewish Enrollment
Would You Rather Be Right or Happy?
Comments
MOST POPULAR IN Israel
Our privacy policy