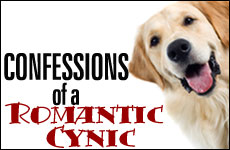 After all these years, have I finally found the "one"?

So sue me for being a little cynical about dating. When you've been single as long as I have, and been disappointed by the vagaries of vast numbers of maybe well meaning men, you begin to generalize about their undependability and/or their overdependence. Sadly, I've grown a bit of a macro chip on my shoulder when any male shows the slightest interest. A smile and I feel he's leading me on. Or, a "hello" in the elevator and I'm already negotiating for boundaries in our shared living space. I've even gone to that baaaad place we unmarrieds sometimes go: the dreaded "maybe I'm better off alone."

So I wasn't about to fall for the oldest ploy in the book as I was taking an innocent stroll in my local park one day in early March. Beautiful retriever bounds up to a soft-hearted female (me); attractive man arrives a few paces behind. How do they train them to sniff out us single women like that? What are we, truffles?! They don't call them retrievers for nothing. Okay, I'll bite.

"What's her name?" I ask, petting her well-trained, well-maintained head. "Mattie," he says, "and my name is Ben." Then, commandingly, "Sit!"

I sit. Mattie sits. He sits, too. We sit and we talk for two hours about many things. I scratch the ingratiating Mattie behind her ears—such a shayna punim this pooch has. Ben makes me laugh. Uh oh. Danger. I wrench myself up to standing.

I let him know I'm going to the East Coast to be with family for Purim and will be unavailable for a few weeks. That'll shake him off. I'll show him I can't be fooled.
And he can just fade away in that fickle manner of so many auspicious starts.

But he doesn't shake. Instead, he sends me an online Purim card. This modern age has so many new ruses for courtship, I scoff. But to his credit, no man has ever sent me one of these before. I show my mother. Big mistake. "Who is he? What does he do?" she needs to know. "I don't know yet, Mom."

I'm back. He called. Hmm. He remembered. He's hanging in there. We meet and dine dog free. It's a big step. He has a well-trained, well maintained head, like his dog's. Kind of a shayna punim, too. He's got a menstchy quality, methinks, some nice Jewish boy-ness goin' on. I make a mental note not to discuss these observations with my mother.

We meet to dine again….with the dog at a sidewalk cafe in the hood. We both love artichokes. Wow. A man who likes artichokes and knows how to eat one. Then we argue -- already! About the title of a Willie Nelson film. He says I'm definitely wrong. Ah hah! We make a one dollar wager and he goads me to the point where I must prove to him I'm right instantly or lose face! How dare he! I'll show him!

Oy veyzmer. He's right. I rather like that he's right. I give him the dollar and realize, in defending my honor I made the mistake of letting him and Mattie walk me home and into my house while I furiously Googled the Nelson canon of fine films. And now he knows where I live and the dog seems waaay too much at home. She somehow knows she goes with my Persian rug and sprawls there langorously. Oh, this guy is very wily, but I'm wily, too! Does he think I was born yesterday!! Does he know who he's dealing with??! I'm a liberated feminist who was freed by Friedan, who strode with Steinem.

Awww. he brings me a bouquet of artichokes, then my own dog bowl and leash. I mean for Mattie. Mattie's really growing on me…oh yeah, and so is Ben.

I'm either losing my mind, or I'm gaining back my heart – a heart that I feared was gone for good.

Uh oh. Now it's June, and I'm feeling fablondzhet. I take him to a Bat Mitzvah party and with the way we're acting, if you didn't know any better, you'd think it was actually my Bat Mitzvah. If I was looking at us from the outside, I would laugh at the very idea that two intelligent, older people like him and me could act like goofy teenagers.

Suddenly, I'm happy all the time – even when I'm not with him. Strangely, his plate leavings don't seem like garbage. His spare shoes in my car are cute. Gulp! His things, which were odd and foreign a few months ago, are now charming and adorable. I once heard that when you accept the things that once annoyed you about a person, you have a "mature" relationship on your hands. I'm either losing my mind, or I'm gaining back my heart – a heart that I feared was gone for good.

So is this guy (and his dog) the one? I don't know yet. But what I do know is that he could be, and that's enough for me to eliminate the cynicism; to cure the defeatist self talk. Unfortunately, as we get older, there's more of that talk, and it often pushes out the hopes and dreams and passion of our youth. But because of the past few months, I'm happy to report that it doesn't always have to be that way – we have the ability to rekindle ourselves and turn our inner cynics into kinderlach again.

Backyard Camp Bonanza
Should I Break Up, Get Engaged or Keep Dating?
Time Is Your Precious Commodity
A Constant World in Flux
Comments
MOST POPULAR IN Jewlarious
Our privacy policy