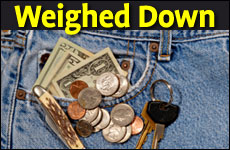 My pockets are weighing me down. Time to change all of that change.

I think my pockets are weighing me down. Between my keys, my phone, my pens, my breath mints, my receipts, my cash, my change, my business cards that I keep forgetting to hand out, and my shopping lists that my wife apparently writes for her health, I’m kind of surprised that my pants stay up at all. But what’s really getting out of hand is the pile of cards in my back pocket. It’s getting to the point where I’m sitting on a slant. Like there’s a tire jack under one side of me, even though my tire’s not flat.

I’m kind of surprised that my pants stay up at all.

My wife knows why. She tells me that this card is for groceries, and that card is for gas, and the other one is for pharmacies, and she has a whole thing worked out where each card gives us reward points or cash back that I somehow never see.

For example, we have one card from L.L. Bean that gives us points that my wife uses to order knapsacks. And I think I might need one of those knapsacks to hold all my cards. In addition to the seven credit cards, I have a license, a health insurance card, a AAA card that I should probably keep in the car, bank ATM cards for several banks, a club card for a gym that I rarely go to, a library card, a library card for the town where my parents live, and 10 store cards, because every store you go to nowadays has to give you a card to carry around or else you don’t get the weekly discounts that they only give members, even though technically anyone can become a member.

I keep all my cards in one pocket, so that every time I’m in a supermarket and I need to pay, I have to pull out all twenty-five cards and go through them, and then flip them over and go through them again, because most of them look exactly the same from the back, and all the people behind me go, “So many cards?” and I’m like, “They’re not all credit cards,” because I don’t want to get robbed in the parking lot.

And I keep getting more cards. For instance, just the other week, I found out that I need another root canal, which my current dentist won’t cover, because he’s out of network. So I’m trying to find a new dentist, and apparently, I was supposed to have been sent a dental card months ago, when I first signed up for the plan.

Great. Another card. I need that like I need a root canal.

People often ask me (and by “people” I mean “people behind me at the supermarket”), “Why don’t you get a wallet? I have a wallet, and my life is so much better!”

Well, I actually had a wallet for a while, and it was worse. I had all my money and cards in ONE pocket, plus four layers of leather.

I’ll tell you when I used to carry a wallet. I used to carry a wallet when I was a kid, and I had sixteen bucks to my name. My wallet was protecting my sixteen bucks. Also my library card, my parents’ extra Shoprite card, and the fake cards that came with the wallet. When you’re a kid, you always keep the fake cards so you can feel like you have credit cards, and so you can get into your parents’ house without a key. It wasn’t the best wallet, though. I’d won it at school and it was made out of fake leather. I had to stop using it when my money started turning black.

But boys really love wallets, because they love carrying things in their pockets. It’s easier than throwing things on the floor, and it’s also a great way to sneak things into the laundry. You have no idea how many times I made my mother wash my wallet. I think that’s why the black started coming off.

Nowadays, I have boys of my own, and while they aren’t old enough for wallets, they keep making us wash their crayons, which melt all over the dryer, and have to be scraped out by an adult leaning all the way in and not being entirely sure that the door of the dryer can support his weight. And while I’m in there, I can’t help but notice that the entire inside of the dryer is covered in stickers. It looks like a nursery in there.

Also, my son, Daniel, who’s in first grade, crumples up his Secular Studies homework and puts it in his pocket, because for whatever reason, he doesn’t want to get out his folder. My wife is like, “Do you have homework?” and he goes, “Nope.”

“What’s that in your pocket?”

So he does the homework, and my wife tells him, “Put it in your knapsack,” and he puts it right back in his pocket. Then he goes upstairs, gets into pajamas, and puts his pants in the laundry.

But here’s what I don’t understand: Every day he goes to school with his Hebrew Studies folder, his Secular Studies homework, and his lunches and snacks. Nothing else. On Sundays, when he doesn’t have Secular Studies, he doesn’t like bringing his knapsack at all, because it’s only a half day, so he just carries his Hebrew folder and his snacks. And then the rest of the week, he carries his Secular Studies homework in his pockets. So why does my wife keep buying him knapsacks?

I’ll tell you why: My wife is a woman, and women like carrying their stuff in a really heavy bag hanging by a strap. In addition to a pocketbook, my wife also carries five thousand keys and trinkets on another long strap, on which she also carries little tiny versions of all the store cards that I have. She encourages me to do the same, but I’d rather have a bunch of cards, because I’m not a fan of keeping a lot of stuff on a keychain. At least cards all go in the same direction.

I like cards. But there’s also such a thing as too many cards. My wife, on the other hand, is not a fan of shuffling through twenty-five cards every time she wants to make a purchase.

“Why do you carry around the library card from the town where your parents live?” she asks me.

I don’t know. For the same reason that she carries around her parents’ house keys, even though they live four hours away and there’s no way she’s ever going to visit them on impulse and then, on top of that, get there to find that her mother, who works in the house, is not home.

>I think that we’re all hanging onto some kind of security blanket from earlier in our lives, and we have to carry it around everywhere -- be it a library card, or a key, or a shopping list from 2007. We all want to hang onto a piece of our heritage, because it's part of what made us who we are.

Conservation Conversion
The Blue Beyond
Great Place to Live
Is Eating Supposed To Be Spiritual?
Comments
MOST POPULAR IN Jewlarious
Our privacy policy