It's None of Your Business 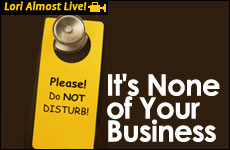 The Three A's of Marriage
What Does Kosher Mean Literally?
Live Abortion Panel
Morality and Abortion: Three Views
Comments
MOST POPULAR IN Spirituality
Our privacy policy