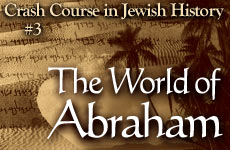 By understanding the character of Abraham, the "proto-Jew", one can understand what Jews are all about.

Jewish history doesn't happen in a vacuum. No people's history happens in a vacuum. So before we take a closer look at Abraham, we must first zoom out and get a little understanding of where Abraham fits in the world of his time.

Whereas most anthropologists believe that hominids, forerunners of human beings physically, originated in Africa, human civilization begins in the Near East in the Fertile Crescent, which is where Abraham was born.

When we say civilization, we are talking about sophisticated arrangements of people living together, not hunter/gatherers or simple agrarian settlements, not just a few people living in a few huts. About 5,500 years ago in the Near East, there was a dramatic evolution of humanity from mostly nomadic hunter/gatherers -- people who spend their whole day looking for food -- to people who were able to domesticate livestock and crops. This meant they could raise animals to eat them or to use them for their milk and their hides, and to plow the land to grow crops.

Once this occurred, there was a surplus of food, which led to population growth. People had time to do more than constantly search for food. They started specializing in different types of labor -- you had craftsmen, scholars, priests and warriors. That, in turn, led to the creation of cities, social and political development and the creation of the arts, literature, science and the like. The earliest civilizations in the world, according to most opinions, began in the area called the Fertile Crescent.

The Fertile Crescent encompasses the area that extends from the Nile Delta in Egypt, the Levant (the middle section where Israel is located), to the Euphrates and Tigris Rivers.

The three great rivers contribute mightily to the fertility, and consequent desirability, of this area. The Nile is an incredible river, the largest river in the world. Without the Nile, Egypt would be a desert. In ancient times, 3% of Egypt was arable land, 97% was desert. Also the Euphrates and the Tigris Rivers are two tremendous rivers; they run through what is today basically Iraq and into Turkey, but what historians have dubbed Mesopotamia, which is Greek for "in the middle of two rivers."

There is some debate whether the first civilization sprang up in Egypt or in Mesopotamia (specifically in the section of Mesopotamia called Sumer) but we can be fairly sure that the first hallmark of civilization -- writing -- originated in the Fertile Crescent.

Writing was a tremendous invention though we take it for granted today. It began with pictographs. You drew a stick figure and that stood for "man." Later those pictures evolved into more abstract symbols which stood for phonetic sounds, until eventually there came about a system of three "letters," each representing a sound and combining together to make a word that conveyed an idea. (To this day, Hebrew is based on a three-consonant root system.)

Writing was the single greatest human invention and is the hallmark of civilization. All the technology and knowledge of today depends on the collective accumulation of accurately transmitted information, which now comes so fast we can't keep up with it.

From the Jewish perspective the ability to express oneself -- whether through writing or speech -- personifies what human beings are all about. We learn that when God created the first human being -- Adam -- He "breathed into his nostrils the breath of life and man became a living soul." (Genesis 2:7) The Hebrew phrase l'nefesh chayah, "living soul," can also be translated as "a speaking soul." (Targum Onkelos, Genesis 2:7)

The Crossroads of Civilization

Of the two earliest civilizations that developed, Egypt is unusual because it's surrounded by desert and so it is virtually unapproachable. Egypt as a civilization survived for close to 3,000 years. This is an incredibly long period of time for civilization to survive. Why did Egypt survive for so long? Because of its isolation it was very difficult to invade. (1). It took the Greeks -- specifically Alexander, the Great -- to finish Egypt off, and then it became a Greek colony.

Mesopotamia had no such natural defenses. It was a giant flood plain sitting in the middle of the great migration route of many ancient peoples. Any conqueror who came out of Asia or out of Europe usually set foot there. It had no natural defenses -- no mountains, no deserts -- and it was a very desirable fertile land.

We see the land changing hands many times and a huge number of civilizations in this part of the world -- Assyrians, Babylonians, Persians, Greeks, Romans and then, of course, the Muslims.

This tumultuous place is where Jewish history begins -- at the bottom of the Tigris and Euphrates Rivers, in the cradle of civilization. This was the logical place for civilization to begin in terms of the development of agriculture and culture. And it's also a logical place for Abraham to appear, because if it is Abraham's destiny to change the world, he has to be at the center of civilization. If he were born an Eskimo or a Native American, all of human history would have been different. So our story begins in Ancient Mesopotamia and from here Abraham's journey begins.

1)In the 3,000 year history of ancient Egypt, it was conquered only three times: by the Hyksos, the Assyrians and finally the Greeks. Compared to the Land of Israel, which has been conquered and destroyed dozens of times.

History Crash Course #62: Return to the Land of Israel
The Promise Of The Land
Which Chat Are You On?: Parshas Behar/Lag Ba’Omer
Do You Like Slow-Cooked Food? Thank the Jews
Comments
MOST POPULAR IN Crash Course
Our privacy policy