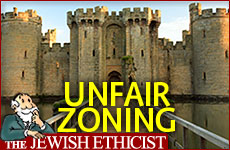 Q. In my municipality, houses can be declared of historic importance; then the owners are forbidden to alter the structure. Is this fair?

A. In Jewish tradition we can find a number of close analogues to this practice, but on close examination we will find that each has a critical difference.

One law which seems to have particular relevance is that of a local synagogue that is customarily used by visitors. After the mishna tells us that under certain conditions a synagogue may be sold, the Talmud adds a reservation: "This refers to a synagogue in a village, but a synagogue in a city , since people from outside come there, it may not be sold since it belongs to the public." (1)

A "synagogue in a city" is similar in many ways to a historic place, which has acquired interest and importance beyond the neighborhood, and which an orderly regulatory process has concluded belongs to some extent to the public.

However, the commentators give two explanations for this ruling. The building belongs in part to the public because an urban synagogue is typically built in the first place with the intention that it should serve visitors, or because out-of-towners typically share in the expense of building and upkeep. This would not apply to most "historic districts", where the original owners were just building an ordinary dwelling according to the characteristic style of their time – which is of course exactly what makes it "historic".

Another seeming parallel is the Jewish equivalent of "eminent domain". In Jewish law, as in secular law, the sovereign is empowered to appropriate private property when it is deemed necessary for a compelling public interest.

This is learned from the famous speech of the prophet Samuel. From the time of Moses to the time of Samuel, hundreds of years later, the Jewish people were led by prophets and judges; no king was anointed. When the people demand that Samuel anoint a king, as provided for by the Torah (Deuteronomy 17:15), Samuel is willing but warns the people of the negative consequences of this decision. Among these, he reminds the people that "your good fields, vineyards and olive groves he will take, and give them to his servants". (I Samuel 8:14.) The commentators explain that this taking may not be arbitrary, rather it is meant to serve some compelling national interest for example provisions for war.

Preserving historical districts may indeed be considered a compelling public interest. These areas make the district itself and the city as a whole attractive to tourists; often they may constitute an irreplaceable historic resource of national or even worldwide significance. So declaring historical districts could be a valid application of eminent domain.

However, eminent domain has an important condition: compensation must be paid. When Maimonides codifies Samuel's exhortation, he writes:

He may take the fields, olive groves and vineyards for his servants when they go out to war and they camp in these places and have nothing to eat there; and he pays their value. (2)

While Samuel never mentioned this, it was obvious to the codifiers that the sovereign may not simply confiscate property from citizens; whenever eminent domain is called for fair compensation must be given. Some areas do give economic incentives for the preservation of historical properties, and not infrequently property owners actually seek historical status. But in many cases there is no kind of recompense, as the question points out.

Another promising model for historical status is zoning laws. After all, laws restricting the external appearance of homes are hardly new. Many municipalities have detailed requirements regarding appearance and building materials of dwellings. Zoning in Jewish law has a distinguished pedigree, dating back to the Biblical laws of Levite cities, which dictate specific dimensions of open space outside the city and land use within (Numbers, Ch. 35). Talmudic law also gives communities significant authority to regulate building standards. The first chapter in tractate Bava Batra deals with the laws of neighbors, and the very first mishna states: "Joint owners who agree to partition their courtyard place the partition in the middle. Where it is customary to build it out of unhewn stones, hewn stones, blocks or bricks -- thus they build, everything according to local custom." We see that local building standards are binding.

However, zoning codes are mutual agreements among townspeople to regulate building for their common benefit. The mishna talks about "joint owners". If all the houses will be worth more if all have a minimum setback, it is reasonable for neighbors to enforce such a setback. But historical districts seem to work to the advantage of neighbors or visitors and the detriment of the owners. I have found no evidence that historical buildings in historical districts are worth more than other buildings.

Jewish tradition provides ample precedent for the power of the sovereign or the community to regulate land use for the common good, and it is reasonable that preservation of historic places be considered a compelling public need. However, these rules either compensate the owners or benefit them directly. To the extent that limitations on developing historical structures is a significant burden and doesn't increase property values, I believe owners of such structures should be offered some kind of recompense for the burden imposed on them.

The Jewish Ethicist: Adversity in Possession

The Jewish Ethicist: Fresh or Free