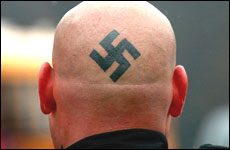 And why it’s not only the Jews who should be concerned.

Anti-Semitism is on the rise in Europe.

A recent Tel Aviv University report found that the number of anti-Semitic incidents in Europe increased by 30 percent between 2011 and 2012.

A separate analysis of anti-Semitic incidents in France noted a jump of 58 percent in that same period, and that half of all racist acts in that country are committed against Jews, though Jews constitute just one percent of the population. Most striking last year was the targeting and murder of four Jews, including three small children, outside a Jewish school in Toulouse.

Moreover, there are today two aggressively anti-Semitic, xenophobic political parties represented in the parliaments of European Union member states– Jobbik in Hungary and Golden Dawn in Greece. Other extremist political movements operating on EU soil have had some success on the local and regional levels.

As the British newspaper The Independent pointed out in a May 5th editorial referring to Jobbik, “Hungarian populists have come from nowhere in only a few years by attributing all their country’s ills to the enemy within – in this case, half-a-million Roma and 100,000 Jews.”

And Golden Dawn invokes Nazi-like images as it demonizes Jews and migrants to advance its agenda, making its relative success in a country brutally occupied by the Third Reich all the more shocking.

In addition, anti-Semitism is expanding in cyberspace, prompting at least one government, the French, to seek aggressive ways of combating it.

And finally, the campaign to demonize and delegitimize Israel grows stronger.

This goes beyond criticizing specific Israeli policies, which is a normal part of life for any democratic nation. Rather, per the EU Fundamental Rights Agency Working Definition of Anti-Semitism, it is about “denying the Jewish people their right to self-determination,” “applying double standards by requiring of Israel a behavior not expected or demanded of any other democratic nations,” “using the symbols and images of classic anti-Semitism to characterize Israel or Israelis,” or “drawing comparisons of contemporary Israeli policy to that of the Nazis.”

Rising anti-Semitism in Europe is fueled by three main sources: the extreme right, largely boosted by concerns about the economic crisis and growing migration; the extreme left, which refuses to accept Israel’s right to exist; and those Muslims who espouse hatred for Jews and Israel. Apropos, a recent study in Belgium found that nearly half of Muslim teenage students held anti-Semitic views.

Why should Europe, amidst its many other challenges, be concerned?

The reasons are crystal-clear.

Europe, more than any other continent, knows something about the slippery slope of anti-Semitism – how it begins and where it can lead.

Moreover, history teaches that anti-Semitism may begin with Jews, but, ultimately, threatens the well-being of entire countries.

And finally, the EU has responded to centuries of war and persecution on European soil by championing humanistic values. Action is surely called for when these values are threatened.

Start by acknowledging the problem; stop the denial.

There is no one-size-fits-all solution to the age-old pathology of anti-Semitism, but a good place to start is to acknowledge the problem.

It sounds obvious, but such acknowledgement encounters resistance. Some European officials prefer to believe that attacks against Jews are acts of “hooliganism,” not anti-Semitism. Some spend endless hours questioning the methodology of polls, rather than digesting the consistently worrisome results. And some would rather debate ad nauseum where the line between “legitimate” and ‘illegitimate” criticism of Israel lies, instead of recognizing the stark fact that anti-Semitism has all too often been transferred from the individual Jew to the Jewish state of Israel.

The four layers of democratic nations must be fully mobilized – (a) regional bodies, such as the EU, Council of Europe, and OSCE; (b) the state – its political leadership, law enforcement and judiciary, and educational system; (c) civil society – religious groups, human rights organizations, and the media; and (d) individuals of good will.

There are, of course, many current examples of precisely this kind of mobilization. The OSCE has a special representative to combat anti-Semitism. Some governments have taken tough action to fight anti-Semitism. There are Christian and Muslim leaders who demonstrate solidarity with Jews, and vice versa, in confronting acts of bigotry. And there are spontaneous acts of good will, such as the students in Italy who stood up for a Jewish classmate shockingly attacked by her teacher.

Yet, as the problem grows, more such action is needed, on every level and in every country. Otherwise, not only the Jews are at risk, but the very fabric of society.

Cries of a Jewish Woman

Wall of Lies
It Takes A Lot Of Faith To Be An Atheist
How Instagram Brought Back This Nostalgic Soup
What Makes Eli Run?
Comments
MOST POPULAR IN Israel
Our privacy policy