Maimonides #13 - Resurrection of the Dead 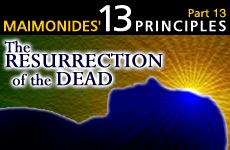 Why is it necessary to bring the body and soul together for ultimate eternal reward?

So again, why doesn't this Principle posit the existence of the World of Come? Why did Maimonides choose the idea of the resurrection of the dead instead?

Obviously, it is preferable to avoid this reward if at all possible. Nonetheless, souls that have gone through Gehinnom do join with those that went straight to Gan Eden, and there they all await the "great and awesome Day of Judgment" which prophets discuss (Malachi 3:23). This Day of Judgment is the day of the resurrection of the dead, when all will be judged as to their position in the World to Come. Until resurrection, no human being enters the World to Come.

Still, why does Maimonides describe this Principle in terms of resurrection rather than the World to Come?

Man is not a soul bound in a transient body. If that were the case, resurrection would have little significance other than representing the soul's return to its bodily prison.

Resurrection signifies that man in his totality, body and soul, is immortal.

Man is a soul and a body together. As such, he needs to relate to a future that somehow involved both his soul and his body. Resurrection is the rejoining of the body to the soul in such a way that it can achieve this future.

If the World to Come involved only the soul, would man be willing to give his body's entire life for a future nothingness? The soul has always been understood to be immortal; it never dies. We comprehend the immortality of the human being, however, through the resurrection of the body. Resurrection signifies that man in his totality, body and soul, is immortal.

The owner thinks a moment and then forces the lame man to hop onto the shoulders of the blind man. Only then, when they are together, has the owner found his culprit, so he beats them both.

Only a body and soul together have free will. Only together they are in the image of God.

Just as there could be no punishment for the lame man alone, there can be no reward or punishment for the soul. Alone, it cannot sin. A soul only sins in its body. Reward and punishment can only apply to the entity that is the person, the body and soul together. Only thus can justice be meted out. The soul cannot enter the World to Come without the body. Is it possible that once the entity of body and soul achieves a place in the World to Come, the body is discarded? A soul is not an image of God. A body is not an image of God. The soul doesn't have free will. Only the two together have free will, only the two together are the image of God.

The union of body and soul is what makes us greater than the angels. As Moshe Rabbeinu pointed out to the angels, it is because of this body-soul union that the Jewish Nation received the Torah (Shabbat 88b-89a). This union manifests itself in the 13th Principle, according to which the body, in a sense, attains immortality along with the soul.

Resurrection of the Physical

The Rambam says there will be no eating, drinking or sleeping in the World to Come (Rambam, Mishneh Torah, Laws of Repentance 8:2). This statement was the focal point of a dispute between Maimonides and Nachmonides, and has been deeply misunderstood. In the World to Come, the body will not be resurrected and then die. Maimonides says that after resurrection, the body will cease to be a body as we know it (ibid.). This cessation implies that the body will instead become so holy that it will become spiritual, transcending the physical limitations imposed upon it in this earthly world. Nevertheless, it will retain its sense of self-existence, its sense of being.

Nachmonides disagrees with Maimonides' assertion that the resurrected body will eventually cease to exist in a physical sense. He believes that the body will always have its physical limitations, which are necessary for it to be aware of itself.

In this state of spirituality, in knowing the Creator, man will reach a level of ecstasy beyond our mortal grasp. As the prophet (Isaiah 64:3; see Brachot 34b) describes it, "no eye has ever seen [it]." The World to Come is inconceivable; the prophet himself cannot describe it. It is beyond the conception of a created human being to comprehend what it means to be connected to the Source of all existence.

The foolishness is evident when people say: "What could be more boring than Heaven!" Of course, they are imagining Heaven in terms of the sensual pleasures of this world. The reason that sensual pleasures in excess do not satisfy, and may even become disgusting, is that they aren't true pleasures in ultimate terms. For the most part, they serve as an escape from the pain and effort of striving for real pleasure.

The feeling of total "being," on the other hand, the sense of accomplishment, of reaching one's ultimate goals, is true pleasure which can be grasped even in this world. The joy of a child whose parents admire the picture he has drawn, the thrill of solving a difficult problem, or the glee on the face of a youngster who has brought home a perfect report card - all are true but still only partial experiences of the ultimate pleasure.

This ultimate experience of being connected with actual, absolute Existence requires the whole being, the body as well as the soul. Without resurrection, without man's knowing that he, as he now perceives himself, will experience this pleasure, the idea of the World to Come is irrelevant. People are not impressed with their soul existing in the World to Come. They can't relate to such an existence because they feel that their soul alone is just not their whole self.

The Principle of resurrection implies that the body is not merely an object but a subject. The body is part of the person himself. Hence the obligations to bury and honor a dead body. Conversely, Judaism forbids cremation and the use of corpses for theoretical research, since both treat the human body as an object.

Excerpted from "Fundamentals and Faith: Insights into the Rambam's 13 Principles" by Rabbi Mordechai Blumenfeld. Based on a series of lectures by Rabbi Yaakov Weinberg, of blessed memory.

Maimonides' 13 Principles
previous
Article #13 of 13
next
Like What You Read?  Give Jews around the world the chance to experience engaging Jewish wisdom with more articles and videos on Aish. It would make your mother so proud and as a nonprofit organization it's your support that keeps us going. Thanks a ton!

Maimonides #12 - The Messianic Era
Lessons from the Book of Jonah
Where Are We? The Body, Brain, Soul Problem
Dr. Sheila Nazarian’s Escape from Iran
Comments
MOST POPULAR IN Spirituality
Our privacy policy
Aish.com Is Looking for Great Writers